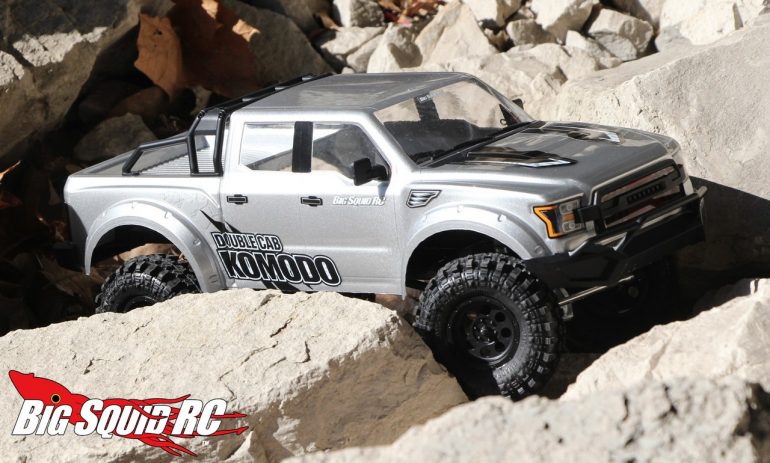 Gmade has been making a big push here in the states with some remarkable crawlers. Two years ago, many hobbyists hadn’t even heard of them, yet here we are at the tail end of 2019 and Gmade is making a huge mark on the scale scene. One of their latest scale crawler kits is the GS02 based Komodo Double Cab TS. We put one together, then put it to the test to see how it stacks up to some serious competition. Why did we think of the Double Cab? You know the drill…

What’s Needed To Complete: The Gmade comes as a kit, you will need several items to get up and running. You will need some paint for the body, basic tools, a radio and receiver, a motor, a steering servo, a speedo, a battery for the truck, as well as a battery charger.

Build Quality: Hey, it’s a kit, the build quality is all up to you! We will say that all the parts that were included were of surprisingly good quality. The Komodo Double Cab was the first Gmade vehicle that our St. Louis branch of BigSquid had built and we were stoked with the quality of its parts.

Test Drivers: It seemed like everyone wanted to drive the Gmade. Our test crew consisted of Iron Mikeee, Robbie G., Hawaiian Christopher, Don The Legend, T-$$$, THE RC Kid, and yours truly.

Test Venues: We used a half dozen different local parks to test the Gmade at. From sandy beaches, to muddy ravines, to leaf covered hillsides, our test truck saw all of the toughest venues that we have locally.

Set-up Notes: With the Gmade coming as a kit, we had to install all the electronics. For power, we went with a MaxAmps 2S 5250 hardcase LiPo to go along with a Castle Creations brushless system. Steering was handled exceptionally well by a Hitec HS-965MG servo that was mated to a Spektrum DX5 Rugged transmitter. All charging duties were belted out by a Hitec X1 Pro.

The Actual Build: Building the kit went quite smoothly. The plastic parts were nice quality, as were the fasteners. Also, we had no issue following the extensive manual.

Turning: Real crawlers come with locked diffs. This helps them when rock crawling, but works against them when turning on other surfaces. In the rocks, the Gmade’s sticky tires and beefy Hitec servo resulted in excellent steering. The weight bias of the truck (thanks a lot to its forward battery placement) gave it a lot of steering on most surfaces. However, its relatively high battery location ended up with unwanted roll-overs at certain times.

Jumping: Oh heck yes, who doesn’t like to send a crawler!?! Typically, big airtime isn’t the forte of a scale crawler. However, we slightly (LOL) overpowered the Gmade, thus giving it more speed than most crawlers. Our truck was not geared to the moon, but it did top out at 11 mph. That is a few mph faster than most “crawlers”. The taller gearing, with loads of traction and power, actually gave our Gmade some speed for jumping! No, it wasn’t making any triples, but it could get a few feet of air off of curbs, dirt mounds, etc. We ended up jumping the Double Cab wayyy more than any other crawler we’ve reviewed. And while we weren’t “sending it”, the ability to catch a bit of air really added to the fun of the truck. It also came in handy in certain rock crawling sections where power was the only way to get over an obstacle. To get back to the real subject here, the Double Cab jumped in a scale manner. The front suspension is top notch out of the box, but the rear is a bit heavily sprung and damped (at least for jumping, which I am sure the designers were NOT shooting for, LOL).

Bumps/Whoops: With our Double Cab pulling more top speed than most scale trucks, we had a blast hitting small rough sections with it! We have several notes here. The front suspension, no matter what we were doing with the truck, was super on-point. However, that stiff rear led to some kicking and bucking when pounding the whoops (at 11 mph, LOL). As the Gmade generally had a “tippy” feel to it, once the truck would get a bit sideways in the rough, it would often times roll. The moral of the story here is- it was a blast to drive in the rough and looked realistic while doing so.

On-Road: So, ya… rock crawlers aren’t known for being the most fun ever on pavement. If the only place that you have to drive is pavement, try something with more top speed. While the Gmade is fun for a while popping wheelies and crawling over curbs, the real fun awaits you once you take it off-road.

Grass: The Gmade was a beast in grass. Its tires did a great job, as did its 4wd system. While not fast like a 1/8th truggy, the Gmade can easily chew its way through taller grass as well.

Straight Up Crawling: With a bit of extra speed on tap, we knew we were gonna see some downsides when hardcore crawling. Thankfully, the Castle brushless system did an amazing job off the very bottom for power. For strictly hardcore crawling, we definitely would have geared lower. The Double Cab’s ultra soft stock tires (with aggressive tread) did an amazing job in the rocks. The stock foams are also quite soft, thus giving the Gmade a lot of grip to get over tougher obstacles. And while the stock tires aren’t exceptionally tall, they do a fantastic job for kit tires. Also, because the tires are more of a scale diameter (not huge), the Double Cab can scrape a lot of frame rail over rocks. People that buy the Double Cab are buying it for its look, and thus the scale manner in which it drives when off-roading.

Tires: As you can tell from other categories, were we super impressed with the stock kicks. They were molded from some of the softest rubber that we’ve seen in a kit and have a very aggressive tread pattern. On dirt, grass, mud, or even on rocks, they did a solid job.

Power: The power system is up to you! We went with Castle Creations brushless power just to keep things interesting and geared it for a bit more zip than a typical crawler. Needless to say, our Double Cab had some crazy rip from rock bottom, all the way up to its rev ceiling. As most of our “driving” is on dirt/rock trails at our local parks, we like having a few more mph up top (and a few hundred watts under the hood) for longer stretches. The extra power and speed made the Gmade loads of fun to bash just about anywhere. It had more than enough power for wheelies (frontwards or backwards) and for hitting small jumps. The extra power also allowed us to “squirt” over some rougher sections while crawling.

Radio: Our favorite overall bash radio right now is the Spektrum DX5 Rugged. Between its rugged construction, AVC, and a plethora of other features, the Rugged is the bomb when the going gets tough.

Broken Parts: After a very poor landing on a rock jump (on a cold 28F day) we broke one of the plastic links to the rear axle. Otherwise, we drove the Double Cab quite hard with no other breakage.

We were HUGE fans of the stock stealth body mounts. They worked well and were super stealth. Nice!

We saw a lot of rollovers with the Double Cab. While the battery is located up front, it is also mounted on its side, thus raising the truck’s center of gravity.

The body was very nicely detailed and had a great off-road look. Also, the injection molded plastic body parts (and roll bar) were nicely done.

Best Mod: Lowering the battery will yield all sorts of benefits while out on the trail.

Time To Bash: C Graded as a kit, the Gmade went together exceptionally well. Graded as a “how many minutes from the store to the backyard” a kit can take few evenings worth of building.

Workability: B If you have never built a Gmade kit before, no worries. The parts supplied had a very nice fit and finish. Also, the hardware worked without issue.

Car Show Rating: A It is rare when every single member of the Bash Crew loves how a truck looks. The Double Cab was a big hit among our test crew. Those wheels and tires were on-point too!

Bash-A-Bility: B Our Gmade held up very well, even when driven by our nearly blind test drivers.

Fun Factor: A As a whole, rarely does our test crew have a lot of “Holy Cow” type fun with a crawler. However, with its sticky tires, great front suspension, and gnarly CC power system, we couldn’t get enough.

Handling: B While we were impressed by its scale handling when trail driving, its crawling ability stock is in the average range.

Value: B The guys on our Bash Crew felt that you are getting a lot of high quality parts, as well as solid off-road performance, at a very reasonable price point, with the Double Cab.

Parts Availability: C No, we did not find any parts locally for the Double Cab, but GS02 platform parts are easily found on-line.

BigSquid Rating: B The Gmade GS02 Komodo Double Cab TS is a solid off-road truck that has a great look. The build was easy and we had outrageous amounts of fun once finished. Yes, we can very highly recommend the Gmade Double Cab to you.