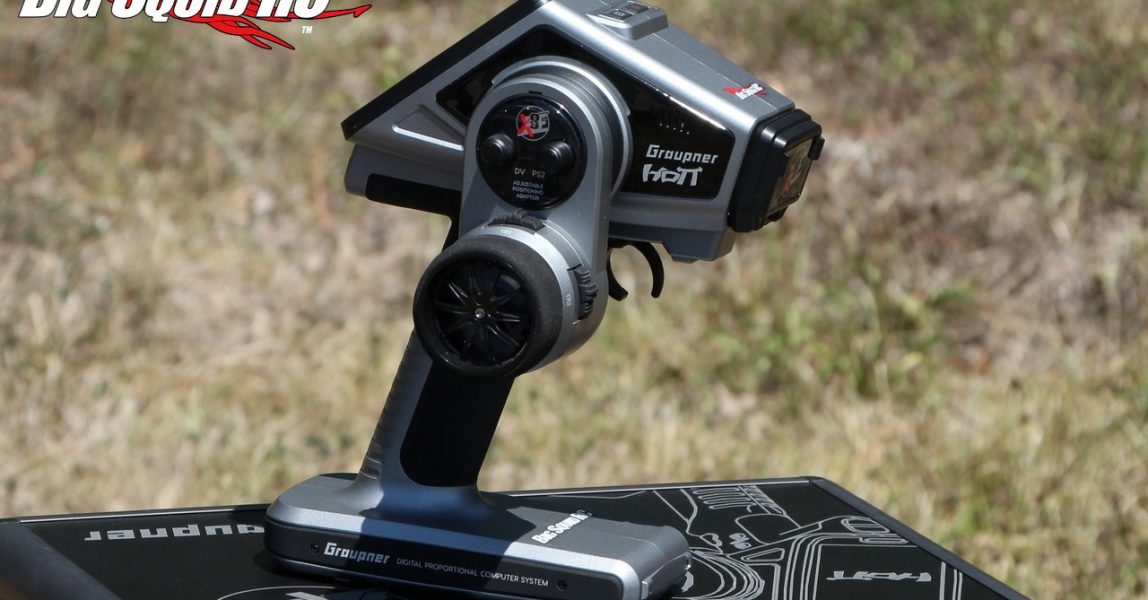 Graupner has a long history in rc. They have been in the hobby forever and have built all sorts of cool products for both the surface and airplane crowds. Several months ago Graupner released the X-8E radio system. The X-8E is the highest-end radio from Graupner and is absolutely loaded with features, yet it sports a relatively low price point. Is the Graupner a true high-end radio? Does it drive as well as its competition? If you accidentally drop it, does it break into a million pieces? Keep on reading to find out what we thought about the X-8E…

Primary Competition- Other top-of-the-line radios like the Futaba 7PX and the Spektrum DX6R.

Build Quality- Our crew took a close look at the Graupner but could find no faults with the quality on the radio, its case, or its receiver.

Set-up Notes- We ran the Graupner in 3 different vehicles. For crawling we used it in a RC4WD Gelande II Cruiser. For bashing we installed it in a Pro-Line PRO-MT and in a Traxxas X-Maxx.

Feel In Hand- The Graupner felt best to our testers who like thin grips. The grip area on the Graupner is on the thinner side of things, somewhat similar to the KO Propo EX-1 KIY. Two rubber inlays are used on the grip to help provide more comfort and traction for your hand.

The steering wheel was of a normal size and came with a good quality foam. Wheel tension was straight-up normal feeling, not light or heavy. The wheel drop down was very nice and came with a proper amount of lowering.

For the trigger, Graupner opted for a medium size out of the box. This fit all of our testers quite well and they appreciated the rough texturing on the flesh side of the trigger. Tension was perhaps a bit on the light side, but it was right in the ballpark.

As far as balance was concerned, the Graupner felt excellent. While it was ever so slightly top heavy, it really was not noticeable while driving.

On the downside of things, the back top corner of the grip is a right angle. Most drivers never noticed it, but one complained that it made the grip less comfortable than other radios on the market. Also, on the front part of the grip where your middle finger presses up again a plastic lip, the plastic on our unit wasn’t perfectly aligned, thus making for a rough area that rested against the finger. Once again most of our drivers never noticed, but one did.

Ease of Use- All of our testers found the Graupner exceptionally easy to use. Gone are the years when you had to read a 100 page manual to figure out how to use a new transmitter, the big touch screen on the Graupner made setting up a car easy. To change a setting you basically hit the touch screen on the thing you would like to change, then another screen pops up with various options. Its menu system is a bit different than other brands, but after playing with it for 5 minutes all of our guys (and gals) were able to use the Graupner like they had owned it for years.

Features- The X-8E is certainly not lacking for features. Do you want the ability to do telemetry? It has it. Want to be able to update firmware? No problem. Want selectable frame rates? Yup, it has that too. Need a bunch of different model memories? It has 35. And the list goes on, and on, and on. The X-8E also has various programmable mixes that should take care of just about any custom build that will be coming your way.

Glitching- No, we didn’t experience a single glitch while driving the Graupner. One of our local parks is a radio nightmare complete with overhead power lines and a cell tower, but our test unit always had rock solid signal.

Driving Performance- So what is it like to drive the Graupner? Does it feel as fast as its competition? Well, we felt like the Graupner drove incredibly well. OK, so it might not have been the best we’ve ever driven, but it was close. We simply could not detect any lag when driven at normal distances, and its steering and throttle curves felt quite natural. The Graupner absolutely gave a high-end feel while being driven.

While rock crawler the Graupner simply felt effortless and pretty much unnoticeable. That is a great thing. It transmitted the signal as asked, and perfectly so. A better test was when we used it in our faster bash trucks. There, once again, it drove very naturally. Steering felt linear and “normal”, as did the throttle.

Radio Range- Once again our test crew was on the lazy side of things so we didn’t test all out range, but we did step off one area of a park where we were getting a 250 foot radius. We didn’t do any hardcore high speed running with the Graupner, but for all of our “normal bashing” we never ran out of range with the X-8E.

Durability Testing- Such is the life of a tester at BigSquidRC, some days you have to break a truck in half, others you have to drop a top-of-the-line radio off the roof of a drivers stand. We did a couple of drops at around 10 feet, plus we knocked it off a tailgate a half dozen times for good measure. We did have the battery tray door come off a couple times, otherwise our test unit did not break.

There is an LED at the bottom of the touch screen that indicates when the radio is turned on. While it is super easy to see in full daylight, we felt it was a bit too bright. We went on an evening trail drive and the LED was so bright that it drew attention away from the vehicle we were driving.

Just like a cell phone, the touch screen on the Graupner can be operated normally or sideways, depending on how you like to hold the radio. It doesn’t automatically switch perspective, but it is easy to change by one touch on the screen.

Did we mention that it comes with a high quality aluminum carry case? We were Huge fans of the case. It looks trick, it works well, and it was nice not to have to go out and buy one separately.

The Graupner also comes stock with a 5000mAh LiPo battery. Once again, this was quite awesome. Instead of having to dig around for AAs or having to buy an aftermarket Lithium pack, it comes right in the box.

If you’ve never owned a “high-end” radio before, the Graupner would be a great unit to see what they are all about. It drives better than an RTR unit and all its bells and whistles definitely feel like your money was well spent.

Hey, how much are spare receivers? Well, the stock 4 channel unit runs around $45 while its smaller 2 channel brother is under $30. How does that sit with your wallet?

Time To Bash: B We had no issues getting the radio set-up or when using it on a new car. You are looking at just a few minutes to get it up and running. Big props to the touch screen and Graupner’s menu system for making it so easy.

Car Show Rating: B Our test crew was divided on the looks of the Graupner. It absolutely has a modern high-end look, one that some of our testers loved, but others thought it just looked run of the mill.

Bash-A-Bility: A Yes, we treated the Graupner like it just took out our ex-girlfriend, but it took all the abuse we could dish out without issue.

Range: A The X-8E never failed us while out bashing. It had more than enough range for us, going so far that we could barely even see our truck at some times, but we were still in full control.

Value: A Is the Graupner the best value on the market for a high-end radio? We think it gives you a massive amount of features, with top notch driving characteristics, along with extras like a hardcase and LiPo, for an extremely reasonable price.

Big Squid Rating: A- We really didn’t know what to expect when we got the X-8E, but it quickly won us over. When we first paired it to a truck we found it a joy to use, then when we drove it, it blow us away with its performance. Truly, if you are looking for high end performance on a budget, the Graupner X-8E is a fantastic choice for you.