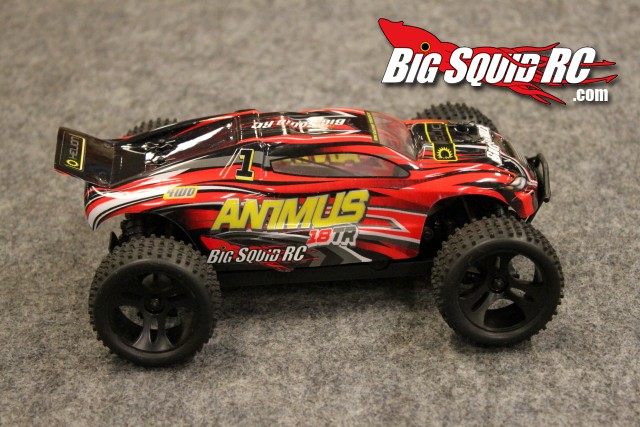 When Cubby calls you answer it, so when I saw Cubby’s name pop up on my caller ID I knew I was either in for a butt chew’n or for something fun. Luckily he was calling to ask me to review the Helion Animus 18TR for BigSquid. The 18TR is the latest and greatest from Helion so I couldn’t wait to get the truck in my hands. Read on to learn everything you wanted to know, and more, on the new 18th scale truggy from Helion. 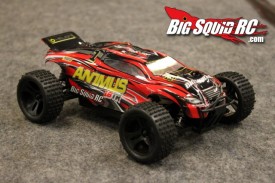 What’s In The Box: Everything you need except for 8 AA transmitter batteries.

Build Quality: The Animus 18TR is not a high end racing kit, but we didn’t come across any quality or build issues. Spur/pinion mesh was properly set, shocks weren’t leaking out of the box, etc. 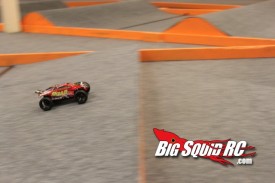 Set-up Notes: We tested the Animus 18TR exactly as it came out of the box.

Turning: The 18TR oversteers but not as badly as its brother the Animus 18SC. The 18TR is darty at low speeds, but can be driven straight at higher speeds. The included servo saver is far too soft making it difficult for the truck to center properly or for maximum steering at high speeds.

Jumping: Big jumps or small the 18TR jumps as well as the big names in its class, and jumps better than it’s brother the 18SC. With no center differential the 18TR can be a tad bit touchy in the air, but that is also one of it’s best attributes, it’s attitude in the air is easily altered.

Bumps/Whoops: 18th scales don’t have a lot of ground clearance, if most of your bashing is done outside in the rough you may want to consider a larger truck like the Helion Dominus, but as far as 18th scales go the 18TR did great on small bumps, rocks, etc. It would get out of shape in rough sections but not as badly as some of the other 18th scale trucks on the market. 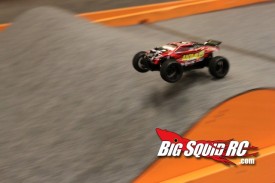 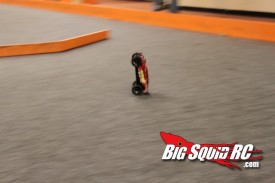 On-Road: The oversteer of the 18TR made the truck hard to drive at slower speeds but once you cranked up the pace the truck became easier to drive. We experienced no traction rolling on pavement or carpet with the 18TR.

Suspension: Bumps and jumps were soaked up well by the stock suspension. The springs and damping are set-up for off-road giving a good ride in the rough. I would recommend heavier oil front and rear for racing, but the stock oil works fine for general bashing. Generally making the front heavier and the rear softer will help reduce the oversteer of the truck. The shocks came well filled and were not leaking but 2 had started seeping by the end of our review. 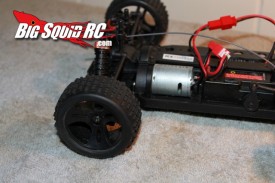 Tires: The knobby tires on the Animus 18TR work well, they aren’t made of super soft race rubber, yet they gave good traction on every surface we drove on. Wear was very reasonable from the Helion tires. The stock foams are soft but worked fine.

Power: Power is quite authoritative straight out of the box, in fact the 18TR is faster than its big brother the Helion Dominus we just tested. At a local track the Animus 18TR could make jumps the Dominus could not, and out in the parking lot the 18TR just blew past the Dominus. No, it’s not anywhere near the league of shear power of a Mamba 8k system on 3S, but it’s got more than enough power to be fun right out of the box.

Radio: Grip and trigger were quite comfortable. The wheel is wrapped in rubber, we’d have preferred foam, but the rubber felt nicer than some of the hard plastic wheels out there. I’m not a big fan of 70/30 trigger bias like the Helion radio comes with, but I got used to it quickly. We experienced no issues with glitching and the radio delivered plenty of range. The transmitter is one of the few now days that use 8 AA batteries making it feel quite bottom heavy. 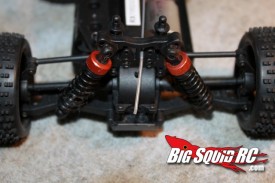 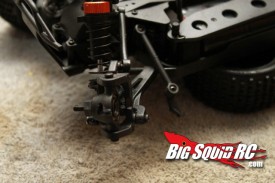 Broken Parts: After two weeks worth of hard bashing we finally broke the Animus 18TR when we slammed a pipe full speed. We broke a front hub and pulled the hinge pin out of the front bumper. Not bad for the thrashing we put the Helion through.

Best Mod Over $5: A quality fast charger. These cost around $50 and will save you hours in charge time.

Here are a few quotes from our 14 yead old novice driver Andi on what she thought of the Animus 18TR.
“It was easy to drive, I wasn’t fighting to turn it or keep it in a straight line.”
“The Helion was fun to drive.”
“It made the jumps with ease.”
“It was faster than most 10th scale cars I have driven.”

Workability – 9.0/10 -The 18TR is an extremely easy truck to wrench on, but we’d have preferred hex screws instead of Phillips.

Bash-A-Bility – 8/10 – The 18TR couldn’t take the beating that its brother the 18SC did, but it still took a lot of abuse before breaking.

Handling – 7.0/10 – Too much steering can be a bad thing, a more neutral turning machine would have scored higher.

Power- 8.0/10 – Power is on par with any RTR in its class and more than enough to put a huge smile on your face.

Big Squid Rating – 8.0/10 – Tentacles.. IIt’s quick, looks great, and can take a good hard days bashing, we like the Animus 18TR and think you’ll enjoy it as well.