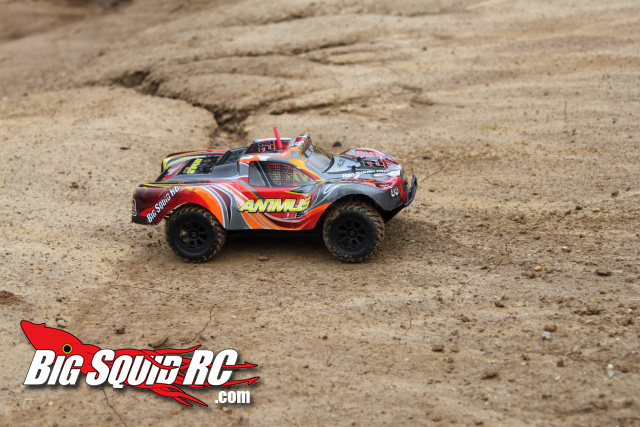 When BigSquid approached me to the do their review of the Helion Animus I jumped at the chance, its not every day a new 18th scaler hits the market these days, nor is it every day when a big name like Gil Losi Jr introduces an entirely new product line. I’ve spent much of my career racing 18th scales for Castle Creations and MaxAmps and I couldn’t wait to get my hands on the Helion 18SC even if it is not intended for racing. I have been bashing with the BigSquid guys for years now and I thought it was great to see a new 18th scale short course truck made for the bashing crowd. 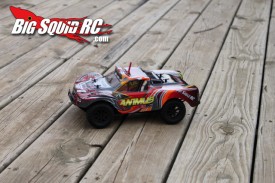 What’s In The Box– Everything except 8 AA batteries for the transmitter.

Drivers– Brian, Wrench, Cubby, Adam “The Intern”, and myself. 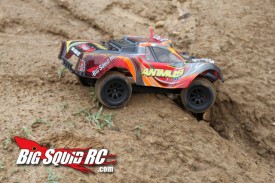 Looks– Cubby declared the Helion the ugliest truck ever produced after seeing early pictures of it but the majority of the guys at BSRC don’t feel that way. Most of the BigSquid bash crew put the Helion 18SC somewhere in the middle as far as looks are concerned. Personally I think it looks better than the X-Ray M18T series and the old Trinity IBS.

Power– Compared to other RTR 18th scales the Helion had good power. The Helion has respectable top speed and enough power to make some impressive jumps at the track.

Jumping– The Helion jumps as well as any 18th scale I’ve ever driven. Take offs are predictable, mid-air corrections are easily made, and the Helion is well planted upon landing. 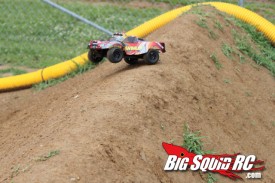 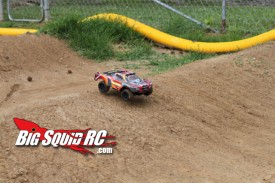 Turning– Oversteer is the best word for describing how the Helion turns. If you aren’t familiar with the term it means the truck has more steering than you want making the truck darty, loose in the rear, and harder to drive than it needs to be. The Helion oversteered on every surface we tested on from dirt to asphalt, but by changing settings on the shocks you can take the oversteer out of the truck.

Durability– The Helion proved reliable as an anvil during the normal part of our bash testing so Cubby decided to step up the intensity of the beatings. The first real torture test was putting the Helion up against a wall and holding the throttle wide open. The hard compound tires on the Helion spun on the ground and after 30 seconds of running wide open against a brick wall nothing was broken or overheated. The next torture test has become a standard of the BigSquid bash crew, running a truck wide open into a concrete curb. Without doubt this is a gruesome test, but after the Helion survived the first run into a railroad tie Cubby demand to see it four more times. After 5 trips full speed into a railroad tie our Helion was still in perfect running order. While we were at one of the test tracks we jumped it off the roof of a public bathroom, numerous times I might add, and the Helion did not break. After returning home from the test track we were determined to break the Helion, so we then jumped it off the second story roof of my house, not once, not twice, but three times, landing to asphalt. The Helion did not break a single part during any of our durability tests and today sits in perfect working order at the BigSquid offices. As hard as we tried, and I think you’ll agree we went above and beyond on this one, we could not break the Helion Animus. I can not think of another truck, regardless of scale, that would have survived what we put the Animus through. 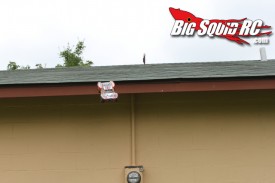 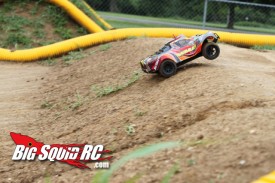 Best Modifications
1. The stock servo saver is too weak resulting in the front wheels getting skewed to one side after big hits. A stiffer servo saver would fix this problem.

2. The spring retainer can lock onto the bottom of a shock body preventing the shock from working, some trimming with a hobby knife can prevent this.

3. The included wall charger takes a long time to charge a battery, 5 hours. A normal hobby grade charger can charge the battery in an hour or less.

4. Change settings to reduce oversteer on the truck. Install heavier shock oil in the front shocks and lighter oil in the rears. Run more pre-load on the front and less on the rear. Turning down the ST D/R (steering dual rate) adjustment on the transmitter will also help, but will result in a wider turning radius. 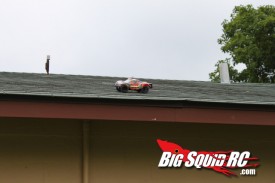 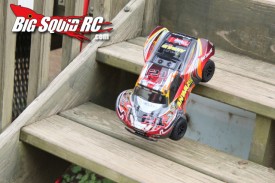 To wrap things up: At a $99 price point, with a 2.4ghz radio and knowing that our local Hobby Town will probably have all the parts we need if we ever actually break one, it’s a decent little truck and probably a good start for a younger person looking to get into the hobby on the cheap.