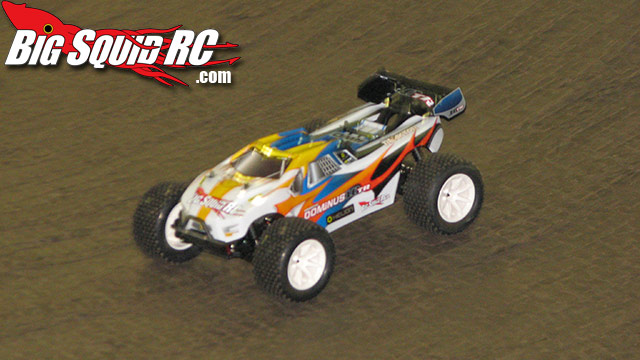 When we first heard about the new Dominus 10TR Truggy back at the Hobby Town show, we were all pretty excited to see what it could do. We finally got our hands on one, and started to put it to the test! Is it everything we wanted it to be? Keep reading to find out…

What’s Needed To Complete: 4 AA batteries for the transmitter 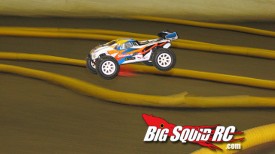 Build Quality: First thing i noticed was a very nice amount of alluminum on the truck esspecially for the price. The truck is built like an eighth scale, smaller, but just as strong. The plastic is no where near brittle it is more of a softer plastic so it will take a beating.

Set-up Notes: We ran our 10 TR completely stock. We started testing with the supplied battery but later switched to a 5000 mAh 2s lipo

Turning: The truck at first is difficult to adjust yourself to because the steering isn’t very fast, it has plenty of torque in the steering but needs better response.

Jumping: Jumping is what this truck does best! The wing keeps the truck level in the air and the decent size tires have just enough mass to allow you to adjust your angle in the air. After hitting the clay track i took it to a park and ended up jumping it off the roof of a pavilion 6 times and didn’t break a thing.

Bumps/Whoops: Another type of terrain that gives some cars a problem.. Another place where the bigger tires help the truck and will allow it to just glide across rough/bumpy terrain. There were a lot of occasions where the truck got up on two wheels while ripping trough gravel/rocks. 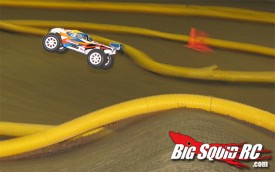 Off-Road: The truggy to me seems like it would make an awesome racer but sure does hold up to bashing! Normally race trucks break easier than trucks designed to take a beating but really I think this is the best of both worlds. We defiantly didn’t take it easy on this truck and it wasn’t designed to hold up to the punishment it took but it did. I was able to race around the track, go out and beat the crap out of the truck, and then go back for more racing without any problems.

Grass: Ripping trough grass was a lot of fun especially at the park where there were insane amounts of leaves! It got to the point where we couldn’t see the truck but just a fishtail of leaves! The truck had plenty of power and traction in tall grass, it was even ripping some up.

Tires: At first, right out of the box i didn’t think the tires would be very good due to their simple tread design. I was surprised on how they did on clay, at first they did cause the truck to spin out a bit in turns but after they wore in they did their job at putting all the power to the ground. The simple tread patter basically works as an all terrain which provides a quality amount of traction on all surfaces.

Power: With the stock battery the truck is fast enough for someone who is just getting into the hobby, but the full potential isn’t reached without a lipo. I was able to get the front tires off the ground on pavement with a 2s 5500 lipo which was a lot of fun. I was very surprised at the amount of power for the price.

Radio: The 2.4 transmitter proved itself as a durable remote! During some last minnute testing the wind blew it off the hood of my car and it smacked th ground so hard the batteries came out but its still working just fine and didn’t glitch once throughout all the tests.

Broken Parts: We have yet to break anything on the truck!! I succeeded in bending the truck in half during the wall test but it took 3 full speed hits to a cinder block wall to pull that off. I disassembled it, straightened the chassis and it still runs fine.

Misc Notes: One problem with this truck that I haven’t mentioned was the cogging. No matter how easy you go int the throttle it cogs a bunch before it takes off. I talked to Brian and i guess that its a problem with the esc hopefully it gets figured out because as far as I’m concerned, its the only thing majorly wrong with the truck.

Best Mod Under $5: A set of nylock wheel nuts would help to make your new truck solid the ones it comes with have no nylock, I ended up losing three out of the four it came with.

SUMMARY: Event though the truck has some minor issues they don’t affect the quality of the truck its still a very solid truck that is built for punishment and takes it without complaining and for $259 its a great deal for those of you who want to get into the hobby but dont want to spend all thier money.

Time To Bash – 9/10 – Everything was ready to go all it needed was for the battery to be charged and the charger was included so everything that it needed (besides the AA’s) was in the box.

Workability – 8/10 – Not the least complicated in the world but I was able to tear it down to bare chassis in about 25-30 minutes which isn’t bad for the amount of bolts it has.

Car Show Rating – 8/10 – I don’t really care for the looks of the cab forward truggy bodies but this one wasn’t bad, I like the boxy look it makes it look mean with all the sharp edges.

Bash-A-Bility – 9/10 – Even though we bent our chassis it wasn’t easy and nothing broke so I think the truck deserves to get credit for holding up to all of the punishment it went through. All the parts did their job in holding together.

Fun Factor – 8/10 – Very fun truck and easy to jump for beginners because of the wing. 4×4 helps to add the the fun of the truck because it helps it on offroad/backyard terrains.

Handling – 5/10 – The slow steering issue needs to be fixed because at times it was hard to line it up for jumps because of the hesitation on the steering.

Value- 9/10 – Great way to get a lot of bang for your buck this truck is defiantly worth the price! You wont regret buying one.

Big Squid Rating – 8/10 – The truck had no problem going through the testes and lives to tell about them. It is a very fun truck and it will be at many future bashes to see how long it really will last without breaking.