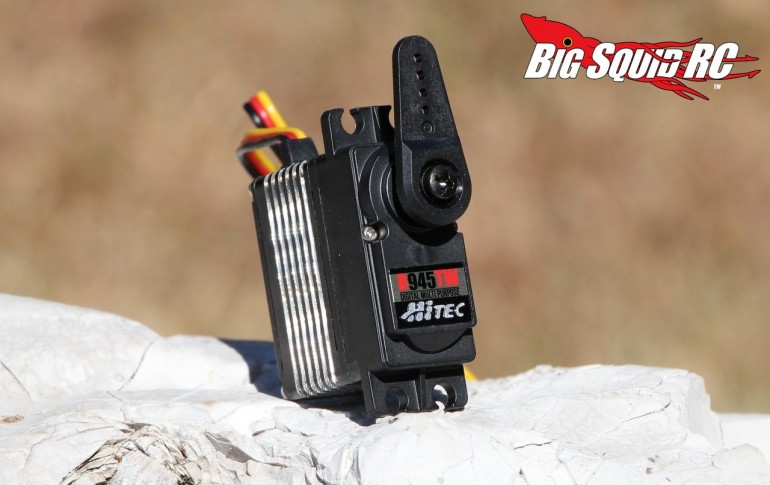 A few weeks ago Hitec announced their new D Series line-up of servos. The D Series is Hitec’s 32 bit programmable line that promises high-end performance and adjust-ability. We have been bashing the daylights out of a D945TW to find out if it is one of the most elite servos on the market, how does it stack up? Read on…

How It Drives- We ran the D945TW in three typical applications for its specifications- a 10th scale 2wd monster truck, a 10th scale 4wd monster truck, and an 8th scale truggy. All we have to say is “WOW!”, we were impressed with its performance in all three trucks. The D945TW never felt lacking for power, it could easily blast the front wheels lock to lock even on high bite surfaces. For speed, it doesn’t have incredibly quick specs, but it was more than fast enough for our test crew, and faster than any RTR servo you’ll run across. However, the best part of the Hitec was how silky smooth it was, rivaling anything we have tested to date. It was amazing how smoothly it would sweep across its entire arch and with the precision that it could hold any position.

Last but not least was the durability of the Hitec. We slammed into all sorts of hard objects, sometimes breaking our trucks, but never the servo. The Titanium Alloy gears held up like a champ.

Downsides- Ummmmmm….. still thinking…. Performance wise, for most “typical” 10th or 8th scale applications, there are none. The only fault some of our more frugal test staff could come up with was its price point.

Final Verdict- Once again Hitec knocks it out of the park, the D945TW is a fantastic servo. It is everything that you want in a high-end servo and we very highly recommend it to you.

For more product reviews check out This Link on BigSquidRC.