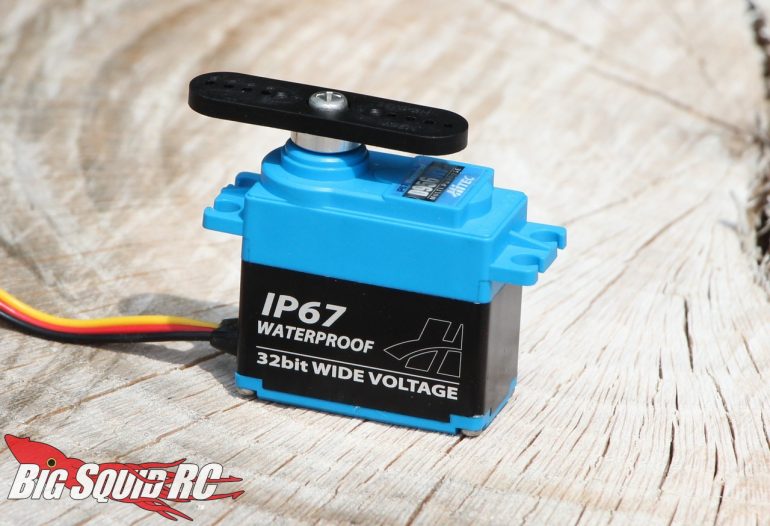 It seems like everybody now days is looking for a good quality waterproof servo, that won’t die within the first month on the trail. To help give hobbyists a heavy duty option for a waterproof servo, the folks over at Hitec have released the D956WP. The D956WP was designed for serious waterproofing, as well as serious torque. We’ve been using the D9556WP for a couple of months now, here is what we found out…

Set-Up And Install Notes- We used the mighty Hitec in three different rigs. First off was a Kyosho Rampage PRO, which is a 2 wheel drive, scale off-road truck. The second was a Vaterra Ascender 1972 Chevrolet K10 Pickup, with the third being a Gmade GOM RTR. The Kyosho was running Castle electronics on 2S with a Spektrum DX5 Rugged, while the other two trucks were running stock RTR electronics.

How It Drives- The specs say that the D956WP should be a torque monster, but not crazy fast. What we experienced in the field was incredible levels of torque, with moderate speed. If you are the type of driver that loves “fast” servos, the D956WP isn’t for you, it is not what we would call “lighting quick”. However, we found our “normal” test drivers never noticed the speed on the Hitec at all while actually driving. What they did notice was its powerful torque. When rock crawling, power matters, and the D956WP had the kind of power that it takes to move the rocks where you need them, after you get in a tight bind.

Most certainly, both power and speed are of the utmost importance for a steering servo. However, there is one aspect that is often overlooked, and that is how smoothly a servo operates. There are plenty of cheap servos (and some not so cheap) on the market that are best described as “clunky” as they go across their range. A great servo is buttery smooth across its entire range of motion. And while a super smooth servo might never be noticed when track racing, it can be of great importance as your rock rig dangles off the side of a 40 foot cliff. In that circumstance, you want that servo arm to move as smoothly as possible.

So, just how smooth is the Hitec? It isn’t the smoothest Hitec we’ve ever driven, but it was pretty darn close. “The Hitec is smoother than the XXXXXX servo I have in my comp rig right now” and “Wow, super smooth servo!”, were just a couple of comments from guys we met on the trail that we had try out the Hitec. We were equally impressed, regardless of truck that we were using, the Hitec gave us high-end performance.

Durability- Ya know, just when you need swamp conditions to check waterproofing, that’s when Mother Nature decides to dry up. Our local area has been flooded for much of the year, but not lately. However, we were able to find plenty of deep water to test the Hitec in. Using our Vaterra Ascender we repeatedly dive bombed a water puddle that put the Hitec several inches underwater. It has been several weeks since we dunked the Hitec and we’ve noticed no ill effects.

Also, as far as the gears go, they have been rock solid for us. We’ve been using the D956WP for a couple months now, bashing it quite hard the whole time, and it still works perfectly.

Final Verdict- Absolutely, the Hitec D956WP is a great servo for rock crawling and other off-road applications. It has loads of torque and a buttery smooth range of motion, we can very highly recommend it to you.