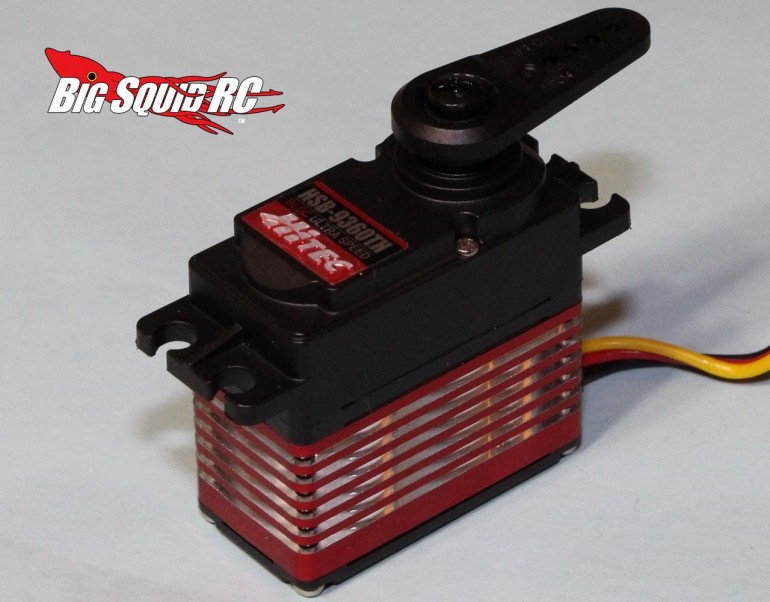 To build the “ultimate” rc vehicle you have to use top-shelf electronics, the HSB-9360TH from Hitec has been hailed as one of the best servos they have ever produced. The 9360 (and its sibling red case servos) is high-end from the ground up, designed to be the best-of-the-best. From its Steve Neu designed brushless motor, to its titanium gear set, to its diamond cut red heatsink, servos just don’t get much more high-end than the 9360. We’ve been using (read- abusing) the 9360 for a couple of months now, how does it stack up? Read on to find out…

We used the 9360 in 3 different vehicles, the Pro-Line PRO-MT, the Axial Yeti XL Kit, and a Team Durango DEX210v2. It was used on two different transmitters, a Futaba 4PX and a Hitec Lynx 4S. Cell counts ranged from 6S worth of Reedy power to 2S MaxAmps LiPo batteries. Lastly, we ran the servo off three different speed controllers, one from TrakPower, one from Castle Creations, and one from RC Gear Shop.

It didn’t take much time driving the 9360 to start wondering if it was the best servo we’ve ever had the pleasure of testing. It quite simply does everything right. It is buttery smooth across its entire arch and it gets there in a hurry if you crank the wheel fast enough. For torque, it had no problem tossing the wheels around on the heavy beast also known as the Yeti XL, even at a dead stop on carpet, and it could easily hold the wheels on our PRO-MT at full lock while going 40 mph+. For centering ability, our DEX210 doesn’t use a servo saver and time after time it returned perfectly back to center, even after smacking walls, etc. Finally, we used it for several weeks in our Yeti XL Kit, beating and bashing into just about everything that wouldn’t get out of our way and we still didn’t blow out the gears on the servo. The 9360 excels in every category that we deem important for a servo. It would be impossible to call it the best driving servo that money can buy without holding a shootout, but all of our testers thought it would be really hard to beat.

The Hitec comes with a PAD (power absorbing device). The PAD can be plugged into your receiver when using the servo with devices (like an ESC) that cannot accept a current backflow. We didn’t need to use it when paired up with a TrakPower or RC Gear Shop ESC, but tried to use it to clear up some glitching when used on a Castle ESC. Ultimately the Hitec worked perfectly on the TrakPower and RC Gear Shop ESC, but we never got the Hitec to work without glitching on the Castle.

The Hitec 9360 is a true top-of-the-line servo. It has all the speed and power that you will need in most applications, and it is as smooth, and centers as well (or better), than any other servo we’ve tested. Yes, we can highly recommend the 9360 to you.

Want to read more reviews? Check out This Link right here on BigSquidRC.