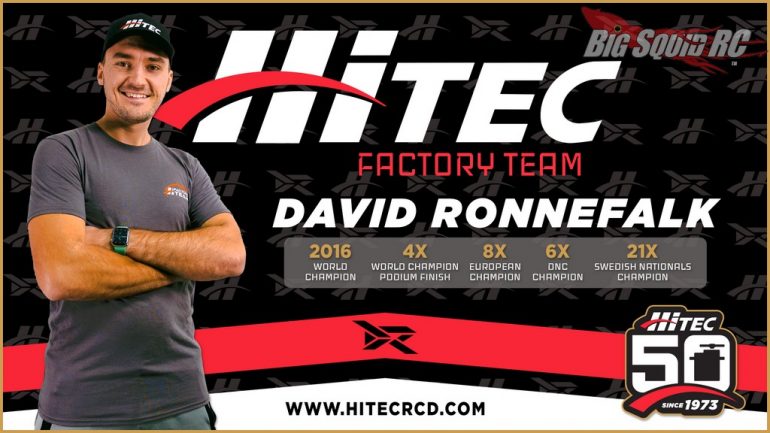 The crew over at Hitec have announced that they have signed David Ronnefalk to their factory team. Ronnefalk has long been one of the top race drivers in our hobby and is perhaps best known for his World Championship win in 2016. Here is the official press release-

“Hitec is thrilled to announce the addition of David Ronnefalk as our Flagship Racing Driver to the 2023 Hitec Factory Team.

Exclusively running Hitec servos in 1/8th and 1/10th on-road and off-road classes worldwide, David is an amazing addition to the Hitec family, as a team driver, brand ambassador and product development consultant.

“I’m really excited to start working together with everyone at the Hitec Group! It’s safe to say that Hitec doesn’t need much of an introduction with their business marking the 50th Year Anniversary. When I started racing in the early 2000s, my cars were equipped with Hitec gear and it’s awesome to now have the opportunity to be involved in the development of their products. Looking forward to many years of cooperation and success!”

David Ronnefalk was introduced to R/C airplanes by his father as a child. He loved joining him at the flying fields even though he had a hard time keeping his planes in the air. His dad decided to introduce him to R/C cars instead and David was immediately hooked!

With the desire to compete, David attended his first race in 2003, a 1/8th scale buggy regional event, about 3 hours from where he lived. The following year, he entered into the 2004 Swedish Nationals but did not have a memorable performance or as David likes to put it, “I’m sure it wasn’t anything to brag about. Haha”. A couple years later, David won the 2006 & 2007 Regional Series and started working his way into the Amains at the larger events hosted in Sweden.

At age 13, David’s illustrious R/C career really kicked into high gear when he became the youngest winner to secure the Swedish Nationals title. That very same year, in 2009, he secured the European ‘B’ Championships in Switzerland, solidifying his remarkable talent and ensuring he discovered his R/C career path. Before signing his first professional contract, David was able to win back-to-back European Championships in 2013-14. By 2015, David completed school and had become a full-time professional racer and he continues to dominate every series he enters.

“I love my job and I wouldn’t change it for anything, to be able to do what you love for a living is very rare and something I will always be thankful for. At the age of 26, I have been able to achieve some great results so far”, said David. These extraordinary racing accomplishments include:

We look forward to a lucrative and winning partnership, both on and off the track. “Skål!” to years of combined success, and an elevated Hitec experience for us all!”

You can use this link to visit the official Hitec Website, or feel free to click on This Link to get more Hitec news on Big Squid.