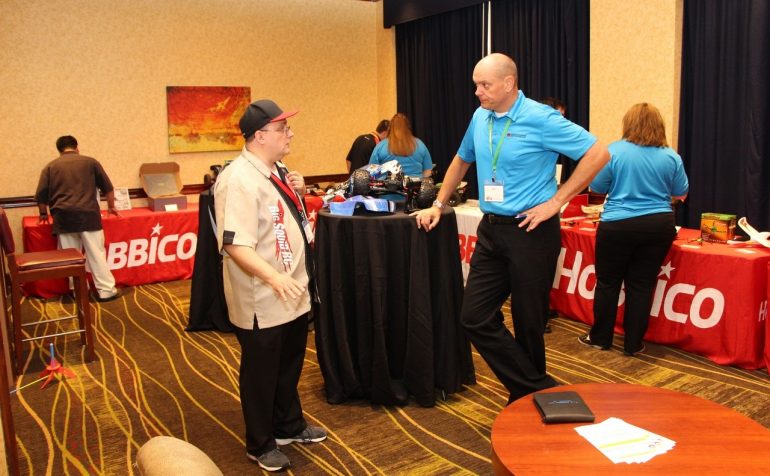 Hobbico At The 2016 HobbyTown USA Convention

If you work within the hobby then you already know who Hobbico is, if not, they are the largest model hobby company in the world. In the surface world they are best known for names like ARRMA, Dromida, Axial, and Team Durango. They are also the exclusive distributor here in the states for lines like Futaba and O.S. Engines.

Hobbico has been a huge supporter of the HobbyTown USA Convention for many years now. The HobbyTown show gives them a great opportunity to meet with their dealers and to show off all their new products. This year Hobbico unveiled the new Dromida Touring Car and Rally Car at the show, plus a number of other products.

FPV gear and quadcopters were big in the Hobbico booth this year, as was the ARRMA Nero. They also had a number of Axial products on display, which are huge sellers in stores. The recently announced Dromida XL drone was also on display, a product that brings high-end features to an affordable price point. Also getting a lot of attention in the Hobbico booth was the new Dromida Twin Explorer, a twin propped airplane with a price point so low ($39) that it should help get a lot more people up into the air later this summer.

As always, the Hobbico staff went above and beyond to make us feel at home and to give us loads of information on all their new gear. We would like to extend a huge thanks to Tom and the rest of the Hobbico crew for the fantastic tour of their booth, we can’t wait to get a chance to hang out with them again next year.

If you would like to learn more about everything that Hobbico has to offer (and that is a LOT of stuff!), simply hit up This Link to visit their official website.

Click This Link to see all of our 2016 HobbyTown USA Convention show coverage.