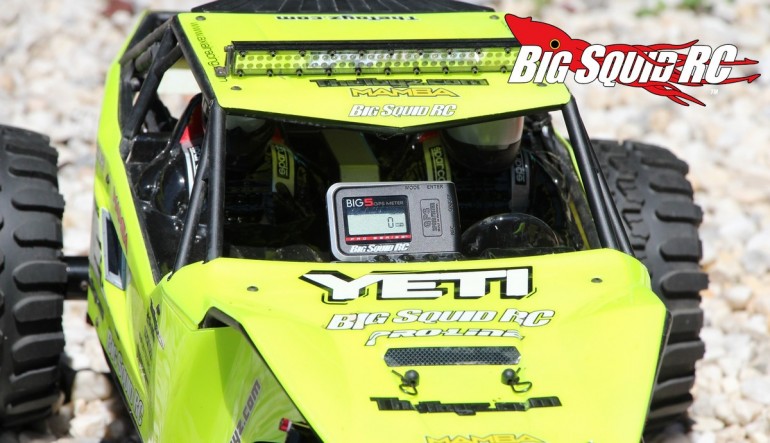 Exactly what is the Hobbico Pro Series Big 5 GPS Meter? It is an affordable and compact GPS unit that can be used to measure (and record) speed, distance, and altitude. We’ve been testing one for several weeks now to find out if it is worth the cash for a normal backyard basher. Exactly what did we find out? Keep on reading to find out…

Test Platforms- We used the Big 5 in multiple of different vehicles for a variety of applications. We installed it in a full size 2015 Nissan Altima, a 2013 Honda CB500X motorcycle, an Axial Yeti XL, an ARRMA Fury SCT, and in a Team Durango DEX8T. To test the speed, distance and altitude readings of the Big 5, we compared it to our Bushnell radar gun, the speedometer and odometer in the Nissan, the speedometer and odometer on the Honda, the speedometer, odometer, and altimeter on a Garmin Nuvi GPS, and the GPS system in an Apple iPhone 6.

The GPS 5 is fairly small and very light. We found it could easily mount in an average sized (10th scale) rc car, and couple probably work in even smaller scale vehicles. It was really easy to mount with Velcro, just as it was easy to keep in one of our pockets.

We measured its runtime at nearly 3 hours, slightly more than stated from the manufacturer. It comes with a pre-installed rechargable LiPo, which worked well for us. Also, with USB chargers being quite common in most people’s houses and cars, we were always around a way to charge the unit back up when needed.

We found the speed indicated to be about 1 to 2 mph slower than the speedometers that we compared it to. For example, if you look at the last picture in the last gallery of this review, you’ll see that the Garmin Nuvi shows a speed of 55 mph, while the Big 5 is showing 53 mph. A difference of 1 to 2 mph isn’t that big of deal in our opinion. In fact we plan on using the Big 5 along with a radar gun to determine top speed on our future test vehicles. Velcroing the Big 5 into a car is a much easier way to get a top speed than having to use 2 people with a radar gun.

We also checked distance against a variety of odometers and found the Big 5 to be right in the ballpark. What is the ballpark? Approximately 3 tenths of a mile over the course of a 50 mile trip, which is pretty darn close. The distance feature of the Big 5 was actually pretty neat as we used it on a trail drive excursion in the Yeti XL and to measure how much ground we covered with the Durango DEX8T while doing laps at our local track.

While the Big 5 was fairly accurate on speed and distance, it was a bit off on altitude. When compared against the altitude readings on our Garmin Nuvi and an Apple iPhone, we found the Big 5 varied from being 2-5 feet off, to up to 60 feet different at times (the Nuvi and the IPhone were typically within a couple feet of each other). Also, occasionally it would change altitude readings at a dead stop. Altitude isn’t a big deal in the surface world, but don’t plan on using the Big 5 to see how high your last jump was.

The biggest downfall of the Big 5 was that it comes set in metric and can not be changed without downloading the GpsLogger V1.3 program from Hobbico. The program is free, but we would have much preferred that it came from the factory in imperial units.

The fastest sample time on the GPS 5 is one second, meaning it collects data once a second. Is that too slow? Not for what we used it for (top speeds on cars, distance traveled by cars). Faster would of course be better, but the one second sample rate worked well enough for us.

Cubby wished Big 5 came with a backlit display, which admittedly would have come in handy at times. As is, the LCD display is easy to read in most daylight conditions.

We found the Hobbico Big 5 GPS Meter to be quite useful and fun to have around. Its price point doesn’t break the bank and ours still works fine, even after a number of hard crashes.