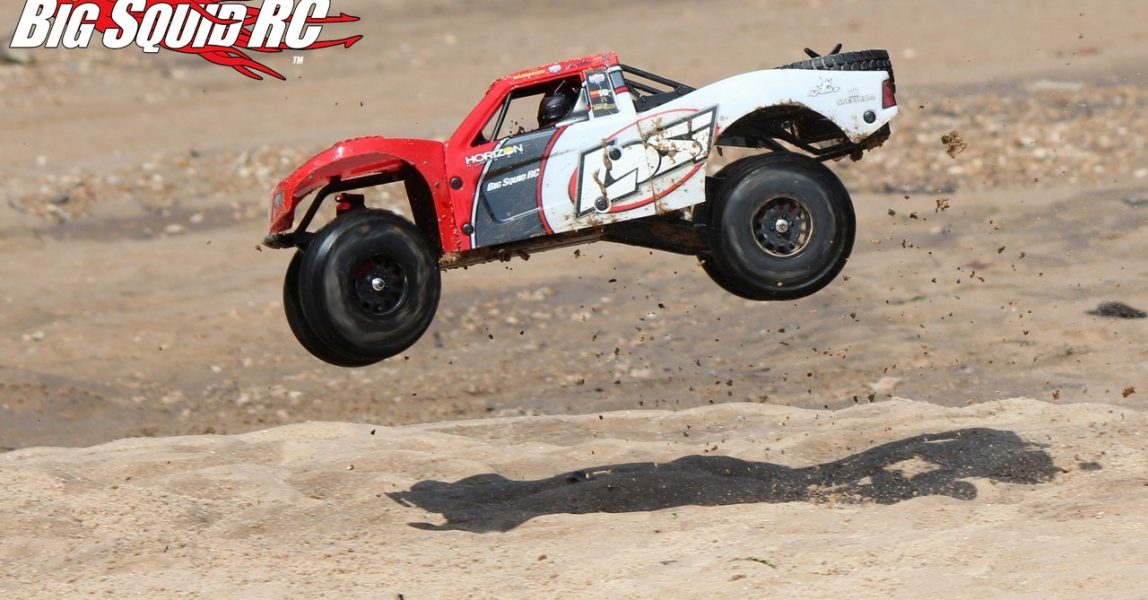 We don’t have to tell you just how hot scale products are right now, they are burning up the sales floor. The folks over at Losi have combined scale looks with a tough 4wd truck on their new Baja Rey Desert Truck. The Baja Rey features loads of scale detailing on the outside, with a brushless power system, AVC stability control, and a solid rear axle on the inside. Is the Baja Rey the ultimate scale desert truck? How much fun it is to drive? Can you crash it hard without breaking a bunch of parts? You know the drill, keep reading to find out what we thought of the Baja Rey…

What’s Needed To Complete: The Baja Rey comes fully pre-built and RTR. While it does comes with four AA cells for the transmitter, you’ll need to pick up a battery pack (with EC3 connector) and a charger to get started bashing.

Build Quality: We found the Baja Rey to be well assembled from the factory. While one of the front shocks was a bit low on oil, the others were properly filled and not leaking. We didn’t find any loose or stripped screws, the gear mesh was spot on, and the tires were well glued (among many things we checked).

Test Drivers: For the Baja Rey review we had our normal test crew of Iron Mikeee, Robby G., T-Money, The RC Kid, and yours truly.

Test Venues: With the Losi being a truck designed for a variety of off-road driving, we ran it at several different venues. We got in lots of time at multiple local parks and used our local Costco parking lot to test it out on pavement. Our test crew even got in a bunch of laps on a legit 8th scale outdoor track, St Louis Dirtburners.

Set-up Notes: The BSRC Bash Crew didn’t change a thing for our review, the truck was left bone stock. For power we used a Dynamite 2S LiPo while a Hitec X1 Pro handled the charging duties.

Turning: The Baja Rey is a tale of two trucks. On Pavement or other high bite surfaces, the rear liked to dig in and cause the truck to traction roll. On loose surfaces, the front is well planted while the rear tended to swing around quickly with very little side-bite. While it turned ok, it certainly doesn’t turn nearly as well as its cousin the Losi SCTE 2.0.

Jumping: The combo of an independent front suspension with a 4 link/solid rear axle typically results in some serious nose diving. Yes, the Baja Rey liked to jump nose down, but not as badly as some of the other vehicles on the market. Also of note, because the Baja Rey has so much rip on tap, when the nose starts to dip a generous stab of the throttle would typically level it out. Still, your best strategy on most jumps is to let off just before the jump, then pound it up the face. And while the suspension worked fine going up most jump faces, it was too soft for big landings.

Bumps/Whoops: The suspension on the Baja Rey is not set-up for maximum performance, it is set-up for ok performance while giving the truck a scale look when being driven. The springs and damping rates are much too soft for optimal handling, but it sure looks cool when pounding a whoop section WFO.

On-Road: The powerful stock brushless system kept the blood pumping when driving on-road, but the Baja Rey is intended for hardcore off-road use. No, the Baja Rey doesn’t drive well on-road, it traction rolls all the time and its torque steer is much more pronounced. Yes, you can have fun on-road with the Baja Rey, but there are other trucks in the Losi line-up (like the SCTE 2.0) that do a much better job.

Grass: Want to talk about a beast? The locked rear diff and aggressive tires did a fine job of shoving the Baja Rey through some serious grass. The Losi can tackle grass several inches tall and generally did a fine job.

Tires: The stock tires have a great scale appearance, as do the wheels they are mounted on. The internal foam is quite soft just like the actual rubber compound. The stock tires find all sorts of grip on hard surfaces, but don’t work quite as well in loamy conditions. Also, there is also a lot of actual rubber on the tires which allowed them to last forever. But Houston, we have a problem. The stock wheels were way, wayyyyy, too soft. They flex like crazy, or at least more than we’ve ever seen a wheel flex before, which causes them to be continually tweaked. Plus, the soft wheels make traction rolling worse while driving on high-bite surfaces. The tires and foams are good, the stock wheels need replaced ASAP.

Power: The Baja Rey certainly does not lack for power, even on 2S. Power from a dead stop is impressive, then it rips through the mid-range, which is followed by a top-end that seems to keep pulling forever. We only tested the Baja Rey is what we would call “hot” temps, meaning we only drove the truck in ambient temps above 80 degrees F. We mention this because the motor in our test unit ran quite warm, above 140 F on a typical run, so you won’t want to gear your Baja Rey any taller, and if you happen to pop in a 3S pack you will seriously want to gear down. However, if you are looking for some serious rip out of the box, the Baja Rey does not disappoint.

Radio: The Baja Rey comes with the Horizon “go to” radio, a Spektrum DX2E. While not some uber high-end unit, the DX2E gets the job done and was generally liked by our test crew. It has decent ergonomics, but we would really like to see it come with a foam covered wheel.

The DX2E also sports Horizon’s electronic stability control called AVC. On many 4WDs we rarely use it, but found it really handy on the Baja Rey. On high-bite surfaces it would help the truck fight against torque steer and on slick surfaces it kept the rear from snapping around in corners.

Broken Parts: The Baja Rey turned out to be a beast when we started driving it aggressively. The stock servo gave up the ghost early in testing and we managed to strip out a rear wheel hex, but otherwise the truck was a tank.

The stock servo is slow and barely has enough power for the job at hand. Yes, you can drive the truck with the stock servo but installing an aftermarket unit will help the truck turn much better.

While on the servo topic, the stock servo saver was wayyyy too weak. This resulted in very sloppy steering.

Hey, how does the body come off? Where are the body clips? Well… the Baja Rey was designed for maximum scale appearance, it doesn’t have body clips because you need to remove 12 screws to get the body/cage off. We didn’t have to do much wrenching on our truck, but when we did, we busted out a cordless drill to speed up the process.

Oh btw, while getting the body off can take some time, the motor is very easy to get to. You simply remove 3 screws on the bottom of the chassis and the motor is right there.

Don’t you just love scale touches? We were huge fans of the brake rotors and calipers. Heck, the rotors even spin with the wheels while the calipers remain stationary! Very, very, cool.

About that battery tray… it works ok. The Baja Rey has a rear battery door and an enclosed battery box which is different than most trucks on the market. We didn’t have any problems fitting a Dynamite 2S 5000 pack, but some packs did not fit well (or at all).

Which brings us to the stock battery connector. The Baja Rey comes with an EC3 that is not easy to switch out. Plan on either buying all EC3 equipped packs or soldering up an adapter.

Thanks to its light damping and springs, the Baja Rey looks really, really scale while being driven. It also sports a healthy amount of torque steer, but stock front & rear sway bars, along with AVC, really help to negate its effect on handling.

Best Mod: While the stock tires are fine, the stock wheels are not. Plan on mounting up some Pro-Line wheels and tires first thing.

Time To Bash: B After charging up a pack it took us very little time to start bashing with the Baja Rey.

Workability: C It takes 12 screws to take the body/cage off the Baja Rey. Once the body is off we found the truck very easy to work on.

Car Show Rating: A We consider the Baja Rey to be the best looking truck in its class. The body, cage, wheels, tires, and cockpit area all look very trick.

Bash-A-Bility: B We rally hammered on the Baja Rey and broke minimal parts.

Fun Factor: A While not a perfect truck, it was amazing how much the guys fought over the controller to drive it. Its big power and scale looks never failed to put a smile on our tester’s faces.

Handling: C Just like other scale trucks with soft suspension and a solid rear axle, the Baja Rey isn’t the best handling truck on the market.

Value: B The Baja Rey looks so good and has so much power on tap that we felt it is a solid buy for the money.

Parts Availability: C The Baja Rey is an all new design so chances are you won’t find many parts in stock at your LHS. However, you will find that parts are readily available on-line.

BigSquid Rating: B The Losi Baja Rey does exactly what it was designed to do- have loads of scale realism while being a blast to drive. If you are in the market for a high speed scale truck, the Baja Rey should be at the top of your list.