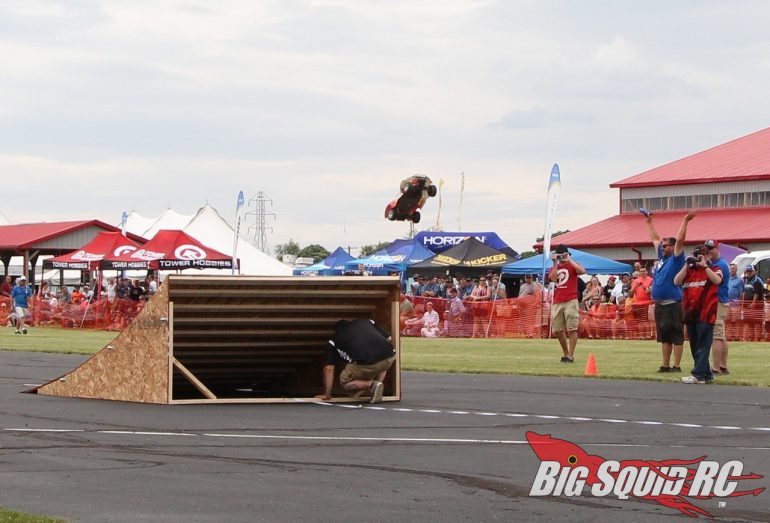 At this year’s Horizon Hobby RC Fest, the BigSquidRC Bash Crew was invited to help put on their Long Jump, RC Sumo, and Top Speed Run events. All three are favorites among the rc bashing community, with each event bringing its own type of excitement.

The Horizon Hobby RC Speed Run event was held on the paved landing strip at Eli Field in Monticello, Illinois. The pavement at the venue was quite smooth and black in color (which helps to hold heat), two facts that gave participants a grippy surface to use during high speed passes. Our Bash Crew used a radar gun to clock the cars. The Saturday winner was Jake Bludgen, a young man from Chicago that was able to hit our radar gun at 99 mph with his Losi 8IGHT-E buggy.

RC Long Jump was held on the same landing strip. The smooth pavement gave drivers tons of space to gain speed before hitting an 8 foot wide ramp and launching into a grassy field. Winning this event was much like the speed run, the higher your top speed, the better. Long time world record holder Paul Bludgen was on-hand to show off his long jumping abilities, as was his son Jake who has also emerged as a threat on the long jump scene. However, at this year’s RC Fest, it was an ARRMA Talion driver from Ohio, Brian Reynolds, who took home the win. Brian was able to send his ARRMA well over 200 feet to take the win on Saturday. This was a major upset over Bludgen, but even with the event being cut short due to injury (our Bash Crew member Jeremy caught a speed run car at 99 mph with his leg!), Paul was glad to get the chance and show off some of his incredible jumping skills.

RC Sumo Wrestling is certainly one of the favorite bashing events held each year at RC Fest. RC Sumo really pulls you into each match, and that happens to not only the drivers, but also the spectators. You see, RC Sumo takes not only a solid car, but also crafty driving by the competitors. It is sometimes a game of brawn, but more so a game of skill where you try to outwit your opponent. The preliminary matches are all “best 2 out of 3”, with the championship matches going to a “best 3 out of 5”. Then, after a winner has been crowned, we always do a “battle royal” where everyone throws their car into the Sumo Ring for one final battle!