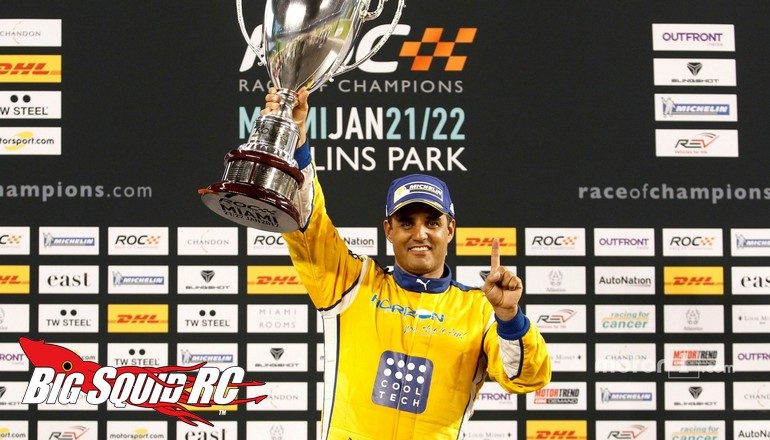 Our friends over at Horizon Hobby have just issued a press release about their driver Juan Pablo Montoya winning the 2017 Race of Champions. Juan Pablo is a brand ambassador for Horizon Hobby and is an avid hobbyist. Oh ya, he is also one of the world’s best race car drivers and his big win last weekend helps to prove it.

You can read the full press release below or you can Hit This Link to get more details over on Horizon Hobby’s official Facebook page.

MIAMI, FL: Horizon Hobby is proud to be the lead sponsor of Colombian motorsport great, Juan Pablo Montoya. This weekend at Marlins Park in Miami, Montoya took on a field of the world’s best drivers in front of 15,000 fans to win the title of Champion of Champions at the 2017 Race of Champions (ROC).

The ROC is an annual event that draws many of the biggest names from across the world of racing. Formula 1, NASCAR, World Rally Cross, MotoGP – they all come to one spot where they go head-to-head on the same track in identical cars. In addition to Montoya, this year’s roster of competitors included other notables such as Tom “Mr. Le Mans” Kristensen, four-time Formula 1 World Champion Sebastian Vettel (and last year’s ROC Champion of Champions), Felipe Massa, David Coulthard, Kyle Busch, Travis Pastrana – and the list goes on.

This year’s event also featured a brand new figure-of-eight track that challenged drivers even more. The best-of-three Grand Final boiled down to a battle between Montoya and Kristensen in which Montoya took two straight heats to become the undisputed Champion of Champions.

We want to give a big congratulations to Juan on such a fantastic win and our best to all the racers who made this ROC another one to remember. For more info and pics from the even, visit the Horizon Hobby Facebook page.”