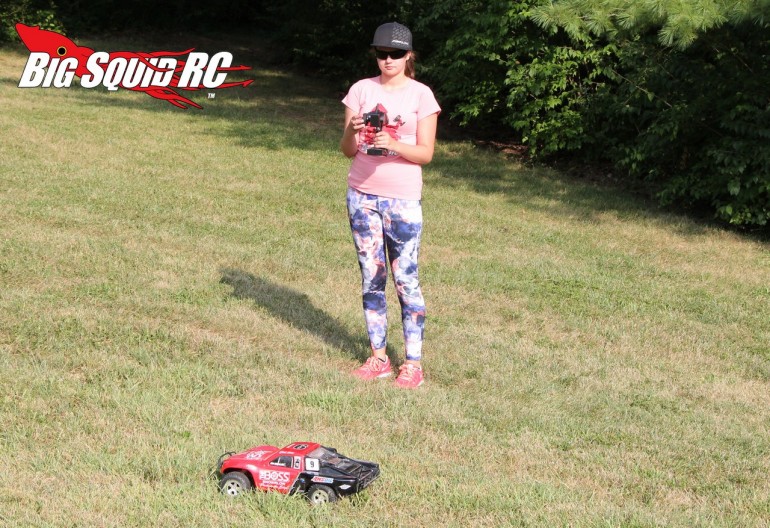 How To – Dialing In Spektrum’s AVC Stability Control

A few months ago we Did An Article on how to put Spektrum’s AVC Electronic Stability Control in a typical bash vehicle like the Traxxas 2wd Slash VXL, but what good is AVC if it isn’t set-up properly? Today we’ll be going over some tips on how to dial in the AVC Stability Control on your car.

* Before you even start, make sure you are using a digital servo, bind your AVC receiver to an AVC capable Spektrum transmitter, and calibrate the AVC receiver to your ESC. The AVC system will not work otherwise. Also note that the faster the servo you use, the better. A slow servo will not allow the AVC system to counter steer as quickly as it can, therefore producing inferior results.

* Once you have everything hooked up and calibrated properly, you can start driving your car and adjusting it. If you are using a lower-end Spektrum transmitter like the DX2E, there is only one adjustment, the steering rate adjustment knob (see the first picture below). To increase the stability control effect you turn the knob clockwise, to reduce its effect you turn the knob counter-clockwise.

* On a higher end AVC capable transmitter like the Spektrum DX4S that we used in our Slash install, there are a bunch of additional adjustments (seen in the third picture below). The “state” setting allows you to turn AVC off and on. The “steering gain” setting adjusts the amount of stability effect on your steering, while the “throttle gain” effects how much of the throttle is managed by the system. The “priority” adjustment can be used to override the stability control when steering near full lock. The final setting is “switch”, this allows you to define a switch on the controller to make AVC adjustments without having to go to the AVC menu screen.

* Stability control only helps your car when it is sliding around, hence the reason you’ll need a slippery surface to dial your car in. If your car is completely planted and doesn’t slide around on pavement, then you do not want to adjust your AVC settings there. Once you’ve found a surface where your car is sliding around, then you can start turning up the AVC settings. On a radio like the DX2E with just one adjustment, you’ll find that as you turn up the effect that it has on your car, the more stable that it will indeed become, but that it will lose the ability to turn a tight radius on sharp corners. You will want to turn up the AVC knob far enough that it helps keep your car from sliding out when pounding the gas out of a corner or when hitting the brake when entering a corner, but not so far that it makes your turning radius too wide. We’ve found over time that we generally leave the AVC knob on the DX2E adjusted about half way, but that varies for different surfaces and for the different driving styles of our Bash Crew members. If you want to go WFO straight up a hill that is littered with big rocks, you can turn AVC all the way up to help your vehicle keep going straight with hardly any wheel input, but once you reach the top the turning radius will be somewhat wider than with it turned off. It literally just takes just a second to change the radio from 100% full AVC effect to 0%, so play around and dial in the exact amount that is right for you and your conditions.

* On a radio like the DX4S the dial in process can take longer. It has several more settings to adjust and you can easily spend an entire weekend trying different things to see how they affect your car. However, once done, the AVC system on the DX4S can give the best of all worlds, it can give a giant amount of both steering and throttle correction, while not affecting steering at full lock. Our Bash Crew typically runs around 20% of steering and throttle gain on high bite surfaces with the priority set at 100%, while on the slickest of surfaces we routinely run 100% on throttle and steering, with a setting of around 80% on the priority. Once again, this varies widely depending on car type, how slick the surface is, and a person’s driving style, so the key is to run a few packs through your car to find what settings work best for you. You will also find that the settings that work best for you on a dusty local track aren’t optimal for your driving style on a parking lot with small gravel. Just remember, the more you turn up the steering gain the more your vehicle will counter steer when it starts to get crooked, while the more you turn up the throttle gain, the more the power will be reduced to your tires when you start getting sideways.

* On a radio like the DX4S you’ll know when you get AVC dialed in perfectly when you can pound the gas out of every corner without spinning out and you can yank the trigger WFO on the straightaway and your vehicle remains nearly perfectly straight without a lot of (or any) steering wheel input. Once completely dialed you’ll find that you can drive your car or truck as hard as you want, without constantly spinning out or having to marshal it.

Thanks for reading and you can Click This Link to learn more about AVC on BigSquidRC.