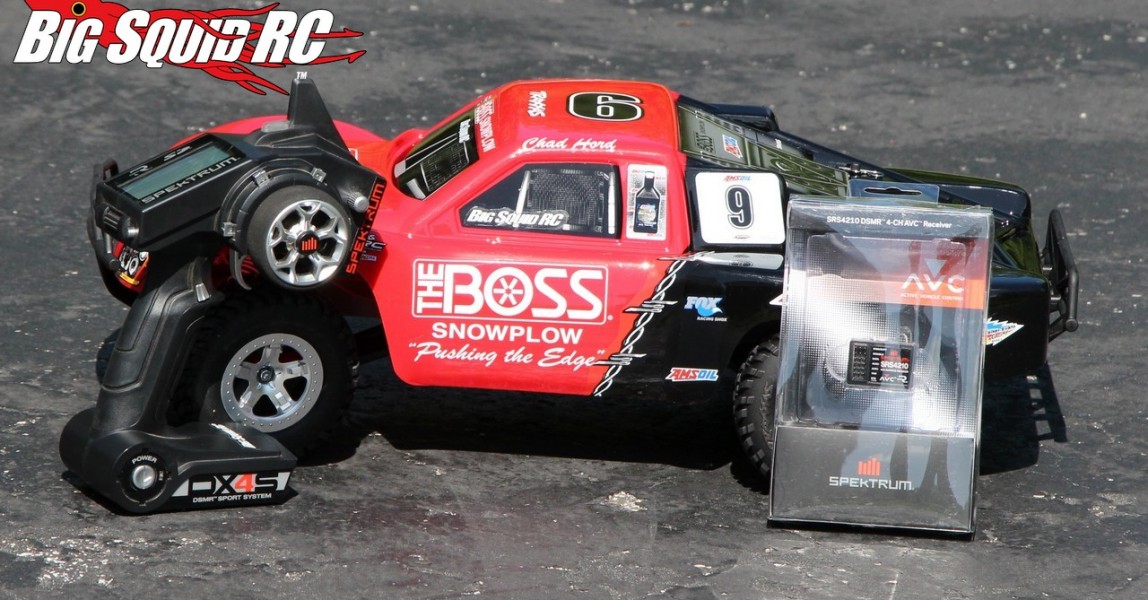 Here at BigSquidRC we get asked lots of questions, but lately we have been hearing the questions, “Does stability control really work?” and “How do you even install it?” all the time. With so much interest being shown, we figured it was time to bust out a post on how to install an electronic stability control system.

While there are now several on the market, we decided to go with Spektrum’s AVC. We went with it for this article not only because we have used it so much in the past, but also because we know how well it works. Stability control really helps 2wd brushless vehicles the most, therefore we grabbed a new Traxxas Slash VXL ($360), which is one of the most common vehicles that we see when bashing.

To add stability control to our Slash, we had to change out the stock transmitter and receiver. We went with a mid-priced Spektrum DX4S ($199) for the transmitter, as it not only works well in the field, but also comes with a separate AVC screen that makes fine tuning the system a snap. For a receiver we used a Spektrum SRS4210 ($89). It is of course AVC compatible and waterproof to boot.

Installing AVC in a Slash

1. The first step is easy and a “no-brainer”, pull out four body clips to remove the body. If you can’t handle this step we suggest you take up underwater basket weaving instead of rc.

3. Remove the servo and ESC wires from the stock receiver.

4. Un-thread the blue aluminum antenna base so that you can can remove the antenna tube.

5. Use a flat head screwdriver to pop up the stock receiver, then remove it.

7. Grab your new AVC receiver, put double sided sticky tape on its back, then install into the same spot that the stock receiver was at.

8. Run the antenna wire out of the receiver box, then through the antenna mount. Re-attach the antenna tube and tighten down the blue aluminum base nut.

10. Plug the servo and ESC wires into the AVC receiver. Our truck came with directional style plugs that required some trimming with a hobby knife to fit into their respective ports. Also of note in this step, make sure the wires are plugged into the proper ports (which are labeled), also make sure that you have the polarity correct (black wires towards the outside of the receiver).

11. At this time you will need to bind and calibrate the new AVC receiver to the AVC transmitter. To do this you will need to insert a bind plug into the receiver then follow the binding and calibrating instructions. For our AVC system we simply had to turn on the car with the bind plug inserted, then turn on the transmitter, scroll to the bind function, then hit bind. It was super simple. Just after we finished binding, we did the calibration process that was equally easy. We had to hit full throttle, then hit brake, then go to neutral, then turn full right, then full left. After you have finished binding and calibration, do not forget to remove the bind plug.

12. You will now want to re-calibrate the ESC on your truck to the new transmitter and receiver. Follow the instructions for your specific ESC, this typically takes less than a minute.

13. Turn your transmitter and truck on, now it’s time to make sure the AVC is turned on and working. On our DX4S we had to scroll to the AVC screen, than click on activate, to actually turn on stability control. We then scrolled down and turned up the percentage of effectiveness. For a good starting point we went with 70% on steering gain, 50% on throttle gain, then 50% on priority. Once you have changed the settings and made sure that AVC is active on the transmitter, you can test it by rotating the truck side-to-side with your hands. If AVC is working, the front wheels will counter-steer by themselves.

14. Grab that 2.0mm hex driver one last time to put the final two screws in the receiver box lid, then put the body back on with 4 clips.

15. Go out and get some wheel time! Play with the steering gain, throttle gain, and priority settings until you have your truck perfectly dialed to your conditions.

So that’s it, AVC goes in amazingly easy. It took us about 30 minutes to do the entire install, and that included time to take pictures and jot down notes.

We will be doing one more post on putting AVC in the Slash. In the next edition we’ll go deeper into the finer adjustments of AVC, along with shooting video to show how much it improved the driving of our truck.

Did you know you can find more “How To” articles At This Link on BigSquidRC?