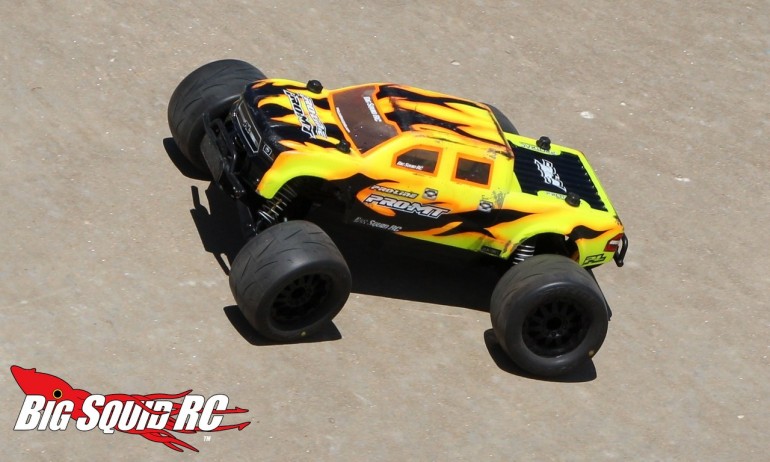 How To – Setting Up Your PRO-MT For Street Driving

There is no doubt that the vast majority of bash vehicles were designed to be used off-road, but end up being pavement burners. We see it every day, trucks (and buggies) of all sorts being driven around the local parking lot, many handling like a hay-wagon because they were not set-up properly.

We decided to do an article on how to set-up an off-road truck for on-road, so we grabbed one of the hottest bash trucks on the market, the Pro-Line PRO-MT, and got to work.

The first thing we did was to contact Pro-Line directly. After all, they know the PRO-MT way better than anyone else does, so we asked for their advice on the optimal PRO-MT on-road set-up. Here is the set-up that we received->

We used Associated Shock Oils both front and rear, mainly because they have been the “standard’ for years and are known to work extremely well. For the internal shocks limiters we simply used some extra washers that we had laying around and placed them under the shock piston inside the shock. The changes in the shocks help to firm things up- keeping the truck flatter on high bite surfaces, making it respond more quickly, and keeping it from traction rolling.

* The second change we performed was to change the rear diff oil. P-L recommends going with 5000 weight, so that’s exactly what we installed. We’ve been using a lot of Team Durango diff oils lately, so THIS is what we installed.

* Next up was a change in camber. The P-L crew recommends to going to negative 2 degrees of camber both front and rear, which we dialed in with a RPM Camber Gauge. Per the norm, we used a motorcycle spoke wrench to adjust the tie-rods. Increasing the negative camber helps increase traction in the corners while preventing the edges of the tires from catching cracks and creating a roll-over.

* Setting the ride height was up next, which was easily performed by turning the pre-load adjustment nuts on the shock bodies. We eyeballed in “arms level” both on the front and rear. This helps keep the center of gravity low for optimal on-road handling.

* Last on the list of changes was bolting on a set of Pro-Line 2.8″ Prime Street Tires. The Primes were designed to give maximum grip on high bite surfaces with extremely low wear- perfect for street bashing. The Primes were dialed on high bite surfaces, but if you drive on dusty concrete or pavement with lots of small gravel or imperfections, you can’t go wrong with the Pro-Line Trenchers.

Wow, with a few changes our PRO-MT was dialed on the street. It was lower and firmer, making it corner with even more speed, while being very resistant to traction rolling. The PRO-MT still soaked up jumps with ease and generally ripped it up at the local skate park and in our cul-de-sac. The Prime tires were also quite impressive, showing loads of grip on freshly laid asphalt.

If you drive your PRO-MT on-road, try a few (or all) of these changes on your truck, you will really like the results. If you drive another brand of truck, many of the changes can be used on your bash-mobile too.