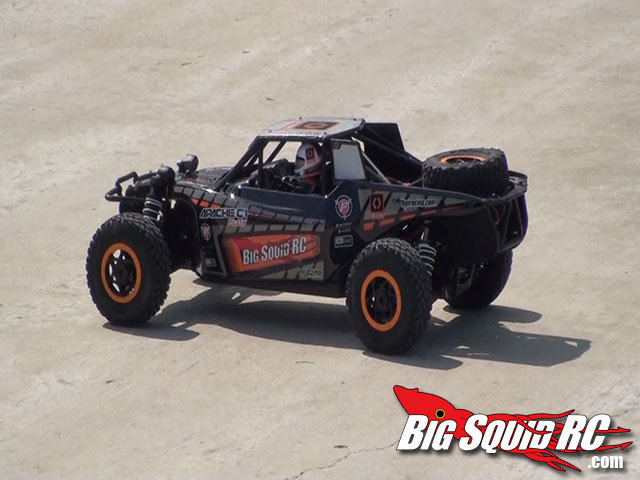 When HPI mad the announcement and initial showed the first pictures of the HPI Apache C1, the world took notice. It was going to be the size people were looking for, the power people wanted, and the scale looks that seem to be the direction RC is going to. People were excited, pre-orders were being made, we got our hands on one (actually two) so lets see how it holds up. Keep on reading..

Primary Competition: The Apache is a 1/8 scale, but the 1/10 Axial EXO would be a direct competitor.

What’s In The Box: The Apache is RTR, you’ll just need to supply a 4S lipo or 2x 2S. It comes wired for 2x 2S, so if you plan on running 4S you’ll need to run a loop/jump connector on the other plug.

Build Quality: The overall quality was good out of the box. Our only glaring issue was that the wheel nuts seemed like they were drilled on tight. This made it a little difficult to remove them because they are slotted as well as the wheel, so loosening these was difficult on a few. Then we had trouble getting one of the wheels off the vehicle because the rim seemed to mold itself to the thread of the wheel hub, probably from being over tightened. We eventually got it off with the help of Mr. Mallet, not a huge deal, but a newbie would of had a serious challenge.

Turning: Steering with the Apache C1 really depended on the surface. Most times there was a bit of understeer as the buggy really wanted to push hard going into the corners. Because the Apache is pretty narrow, I believe anything tighter would create some traction roll issues, but we didn’t really have any unless it was after a poorly placed landing.

Jumping: In the air the Apache feels pretty heavy, and that’s probably because it is. At 10 pounds with the battery, you have a massive vehicle you are trying to launch in the air. This is one of those feelings you can used to, and it makes the vehicle feel really unique to drive. You are much more conscious of how you are taking off and landing, and this is probably for the better. When we first heard it was a 1/8th scale buggy style vehicle, we assumed it would drive like one buggy, but it’s completely different. I think with the scale looks comes more of a scale feel. On larger jumps (were talking huge, touch the sky type jumps) it was difficult to keep the nose up. Even with the ESC under the rear false tire way in the back, the nose wants to aim down. Remember, there is no wing, and a narrow chassis, so there is nothing to catch any air with.

Bumps/Whoops: The Apache C1 handles the bumps and whoops like a champ. The heavy weight plus the suspension would keep you glued to the ground. Even hitting speed bumps in the parking lot at full speed wasn’t a problem.

Tires: The tires gripped well, and have shown little wear after extended periods of cement and asphalt bashing. The are almost all terrain style. You could even get them to screech in the corners on dirt or cement which is fun. The handled the hard clay very well. In the loose dirt you could break them free pretty easily though, so if you are running in the light stuff you may need a change up.

Power: The power plant in this beast is a Castle Creations system under the hood of the HPI Flux/Q-Base names. It’s a good system to have and tweak. Our top speed was easily over 35mph stock, but the heavy buggy means acceleration and stopping is going to put a strain on the system. Breaking the tires loose on the pavement is not easily done.

Broken Parts: After beating on two vehicles for a couple of weeks there wasn’t much damage. We had a broken tie-rod, bent a dog bone, busted some head lights from a head on mid-air collision at the skate park, and busted the posts off the ESC’s. We really beat on these vehicles hard. You can see in the few pictures we were 20+ feet in the air, jumping huge at the skate park, landing hard on pavement, and even had a gut wrenching head on mid air collision that would of destroyed many other vehicles, but we drove away. More about the ESC’s in the misc notes.

Misc Notes:
The scale looks of the vehicle are awesome. Getting under the hood and removing the roll cage only takes 5 body pins, and wasn’t too bad. Once that was done, everything was easily accessible.

The new stock radio from HPI seems to be a love it or hate it thing around the office. Personally I liked the lowered steering wheel, and the feel of it. It gives you a taste of a more high-end feature not normally found in a radio. I give HPI props for changing it up. The more I used it, the more I wanted my other radios to have that same configuration.

As we mentioned earlier, we ended up busting off the power posts on the ESC. This happened on both units after some major bashing and thrashing. Normally on Castle ESC’s the wires are connected directly to the board, but in this version they are connected to these posts first, then to the board. There is a lot of wiggle room around these posts, and we believe the weight from the wires getting whipped around and the g-forces caused them to strain and pull against these connections and eventually breaking off from the esc board. We were able to fix it by removing the posts all together, and soldering directly to the board. Again, not something a newbie wants to be doing. A tip would be to secure the wires so they have no chance of bouncing around or pulling on the ESC.

Best Mod Under $5: If you are brave enough, and skilled with a soldering gun, open up that ESC and wire the power directly to the board. This will save you some down time at the bash spot.

Best Mod Over $5: Stepping up to the Monster Max system from Castle would make a huge difference. This buggy isn’t small or light, more power is always a plus, but were talking WAY over $5 here.

Workability – 8.0/10 – The roll cage is easily removable. Everything under the hood was accessible. Having trouble getting the tires off was a little frustrating.

Car Show Rating – 9.0/10 – The Apache C1 looks good. From the guys inside, to the scale looks outside. It was a head turner at the track as well as the bash spots.

Bash-A-Bility – 8/10 – While parts damage was minimal, the ESC posts were an issue. Keep in mind a fixable issue, once done, you can beat on the Apache pretty good.

Fun Factor – 7.5/10 – The slower acceleration and weight take away a few points. A bigger power system could easily get this score up. We had a blast at the skate park.

Handling – 7.5/10 – The Apache has some understeer, and keeping the nose up on the big air jumps can be challenging.

Value- 7.0/10 – At $600 you are getting a heck of a machine. It’s big, it looks awesome, and it’s plenty durable. Having more power under the hood would of been GREAT at this price.

Big Squid Rating – 7.9/10 – Tentacles.. The HPI Apache is a great looking vehicle. A couple of very fixable issues keep it from scoring much higher. With a little work you could really add a great vehicle to your stable.