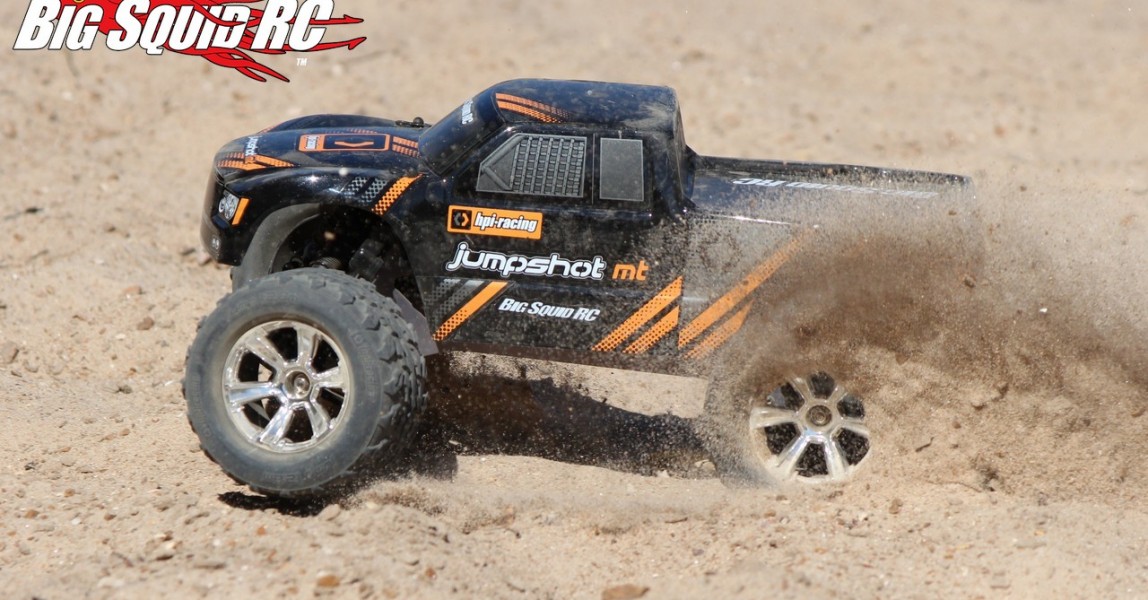 Just like the Staind song “It’s Been A While”, well, it has been a while since HPI Racing introduced an all new off-road platform. Earlier this year HPI debuted their Jumpshot platform to the world at the Nuremburg Toy Fair, since then we’ve been anxiously waiting for one to show up on our doorstep. That day finally came a few weeks ago and we’ve been bashing the living daylights out of the Jumpshot MT ever since. The Jumpshot MT is an affordable 2wd 10th scale monster truck, arguably the most popular and best selling class of vehicle in the basher market. Is the Jumpshot a worthy bash machine? Does it have enough power to keep you interested? How tough is it? Find out all the answers below…

What’s Needed To Complete: Nothing, nada, zero, everything you need comes in the box.

Build Quality: Out of the box we found that the truck had been well assembled at the factory. The shocks were properly filled, the gear mesh was good, and we didn’t find any loose or overly tightened screws.

Set-up Notes: We didn’t change any suspension settings on the Jumpshot, we ran it as it arrived. For power we ran the stock pack for a few minutes, with all the rest of the running on a 2S 6500 MaxAmps LiPo. We skipped the stock wall charger in favor of using a Hitec X1 Pro.

Turning: The Jumpshot steers very well. Its front wheels plant well going into corners and generally stay planted for the rest of the corner. The rear is also well behaved in corners, although the overall corner speed suffers do to the lack of sidebite supplied by the tires.

Jumping: Our bash crew was quite pleased with how the Jumpshot handled in the air. No, it doesn’t have a ton of power to bring up the nose during an endo, but it typically jumps quite flat requiring very little in the way of mid-air corrections. While square edge bumps can get it squirrely on a jump face, the Jumpshot lands quite well thanks to its well damped shocks.

Bumps/Whoops: The Jumpshot pounds through the rough quite well. Its large tires and properly tuned shocks make the truck easy to control in all but the very worst of chop.

On-Road: The Jumpshot gets around real well when driven on-road. Traction rolls are scarce, and it soaks up pot holes like a champ.

Grass: The tall tires and high chassis on the Jumpshot help it get around quite well in shorter grass. It doesn’t tend to traction roll a lot either, it turns well and generally is a blast to drive in grass.

Tires: While the stock tires look good, wear forever, and get the job done, they could use a bit more depth in their tread to get better traction in loam and sand. The tires are at their best in medium packed dirt, where they provide decent traction by rtr standards, but they never really give much sidebite on any surface.

Power: The Jumpshot comes with a pretty standard 540 brushed motor. It is soft off the bottom, has a light mid-range pull, and signs off early up top. Popping in a LiPo gave a big improvement in power across the board, but if you are looking for crazy power you’ll need to install a full on brushless system. The good news is the stock power system (on a LiPo) had enough yank to double into the big triple at our local track and had enough power to be fun with.

Radio: While the included radio isn’t much to look at, it did a fine job of directing the Jumpshot where we wanted it to go. We did not notice any glitching and the range was more than enough for the bashing we were doing.

Broken Parts: While the chassis and running gear proved to be quite tough, we did burn out a spur early during testing after the motor slid when landing rear first on a relatively small jump. After that we did a lot of normal basher testing with no problems. When it came time to get extreme we decided that hucking the Jumpshot off the second story roof of the drivers stand at St Louis Dirtburners would be a great test. So off the roof the Jumpshot went, landing squarely on all four wheels in the middle of the front straight. The landing was a best case scenario but it ended up breaking off the plastic tab that kept the battery door closed.

The stock servo had great power for a RTR unit. It had more than enough power while driving and could easily swing the tires lock-to-lock at a dead stop on dirt. Also, it wasn’t terrible for speed, in fact none of our testers ever complained about the servo.

Speaking of the servo, it’s a good thing it rocks because removing it looked to be quite time consuming. It is buried inside the front of the TVP chassis, not out in the open like most of the other trucks in its class.

On that note, the stock servo saver is also quite good. In an era where too soft servo savers are the norm, the unit on the Jumpshot seemed about perfect.

Throw away the stock body pins, they are small and hard on the fingers.

We had problems with the included NiMH battery. It false peaked like mad, and when we finally did get it fully charged, it died 3 minutes into the first run.

Btw, we clocked our test truck at 25 mph when using a MaxAmps LiPo, a gain of 4 mph over the stock battery.

Tamiya plugs, seriously HPI? In this day and age most every RTR comes with a decent battery connector.

We found that the stock motor ran quite warm on our test unit (in the 140s), even during 70 degree ambient temps.

The stock TVP (twin vertical plate) chassis was really, really, stiff. In fact it doesn’t seem to flex at all in any direction. Sometimes a stiff chassis is a great thing, other times, like for bashing on low traction surfaces, it can be bad. It can also be bad on other running gear when extreme bashing. No, we were not able to tweak or bend the stock chassis, but we would like to have seen it offer a bit of flex.

While the clear spur gear cover makes it easy to visually inspect the spur/pinion mesh, it has some issues. There is no plug in the center (over the end of the top shaft gear) to keep dirt out, meaning dirt can get in, but it can’t get back out. Also, after you remove the two screws holding on the spur gear cover, you then find out you have to remove one of the rear tie-rod screws to actually remove the cover. We ended up just breaking ours to make it more easily removable.

Best Mod: Get rid of the stock NiMH ASAP and pop in a LiPo. You can thank us later as the stock pack was absolutely terrible.

Time To Bash: C The false peak inducing stock NiMH pack took forever to charge. Otherwise, the Jumpshot was ready to bash out of the box.

Workability: C While the TVP chassis is great for strength, it makes parts of the truck much harder to wrench on than a standard layout. Also, the gear cover requires the removal of one of the rear tie-rod bolts to come off, taking more time than other trucks in its class.

Car Show Rating: A The wheels and tires look cool, the body is sharp, and our test crew loved how the Jumpshot MT looked.

Bash-A-Bility: C We burnt out a spur gear early, otherwise our test truck held up quite well.

Fun Factor: B With average power for its class, what makes the Jumpshot fun is its handling, which is better than most of the other trucks in its category.

Handling: B We can’t proclaim it the best handling truck in its class without a full on shootout, but the Jumpshot MT handles really well. In fact, we feel it is just a set of good tires away from being near the very top of the heap.

Value: B With great handling and sharp looks, we think its very reasonable price point make the Jumpshot MT a solid value.

Parts Availability: C Do not expect your LHS to have a bunch of Jumpshot parts on their pegs quite yet, but the two parts we broke, a spur gear and the battery box, are both showing in stock at Tower Hobbies right now.

BigSquid Rating: B- What is the scoop on the HPI Jumpshot? We found it to be a solid bash-mobile. Its stock shock settings are on point and it handles really well on a wide variety of surfaces. Overall it does what every good bash machine needs to do, put a smile on your face.