Things were pretty hectic today at the iHobby 2008 show. This is the first time that Big Squid RC has had a booth, and first time we have had track time to demo our bashing ways. It’s great to see the reactions of people watching us launching vehicles into the air higher than anyone else even things about doing these first few days of the show. People just can’t believe that we are not that concerned with ‘breaking’ something, and are just there to have fun. Fun is what bashing is all about, it’s what we do, and we are glad to bring it to the world!
I didn’t get a lot of time to snap pictures today with running the booth, and the demos, but I wanted to mention some quick highlights of stuff I had the chance to see.
Team Associated had a TON of SC8‘s in their booth. That was pretty much their big show piece this year, and the feeling I get is that a lot of people are pretty excited about this truck. It’s really a good looking truck, it’s got some nice features, and I’m looking forward to seeing them out in the world in action.
DuraTrax has a new vehicle called the Vendetta TC. It’s a 1/18th scale on-road vehicle based on the popular Vendetta series of vehicles. It looks like it can corner on a dime!
O.S. Engines had their new 21 VZ-B V-Spec II ABC – Hara Edition Speed Tuned Racing Engine. Well, at least the name is easy to remember. The engine is the same one that Hara won the worlds with just a few months back. This thing is probably gonna fly off shelves when it hits the streets.
Snapped a quick shot of Adam Drake over in the Losi driving one of their new Mini Rock Crawlers. There is something about watching a guy with that much racing talent drive at 2mph around the rocks. He was barely paying attention to the vehicle and he was navigating the course like it was a flat straight, pretty impressive. Maybe he’s over that whole ‘going fast’ phase.. I doubt it.
The guys from LargeScaleRC had some interesting stuff. First was a large scale electric motorcycle. These things looked pretty cool, and like they were built for off-road. They also had some sweet looking 1/5th scales that should be called the “Big Bling!” I’ll let you figure out what picture that one is.
Lastly, I had to toss in a picture of Adam from Schumacher Racing giving us the big ‘Thumbs Up!’. Nice. 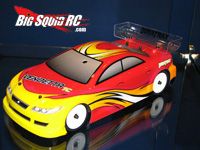 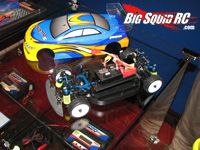 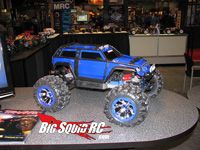 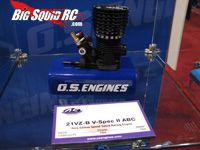 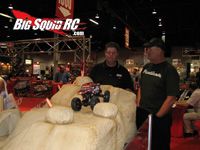 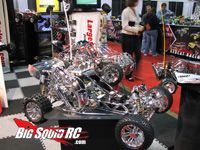 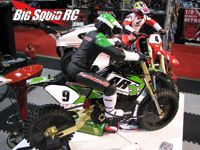 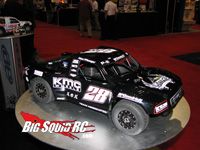 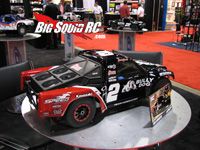 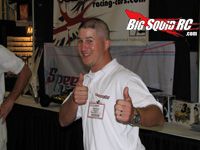