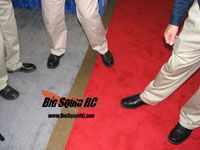 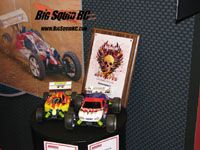 Ok, so what’s with the picture of a bunch of shoes? I honestly don’t know. All I know is that when I showed up to take some pictures, the guys from Global/Hobby Shack all started comparing shoes and pointing out who’s were the best. When I took the picture, they thought I was a goof and would never actually post something like that. Well guys.. I’m a goof, and yea I would post something like that!
The other picture is of the Basher Approved plaque that was awarded to Duratrax for the Vendetta ST. It was very cool of them to display it in their booth. Castle Creations also had theirs up on display as well. Thanks guys! Ok, on with the pics!