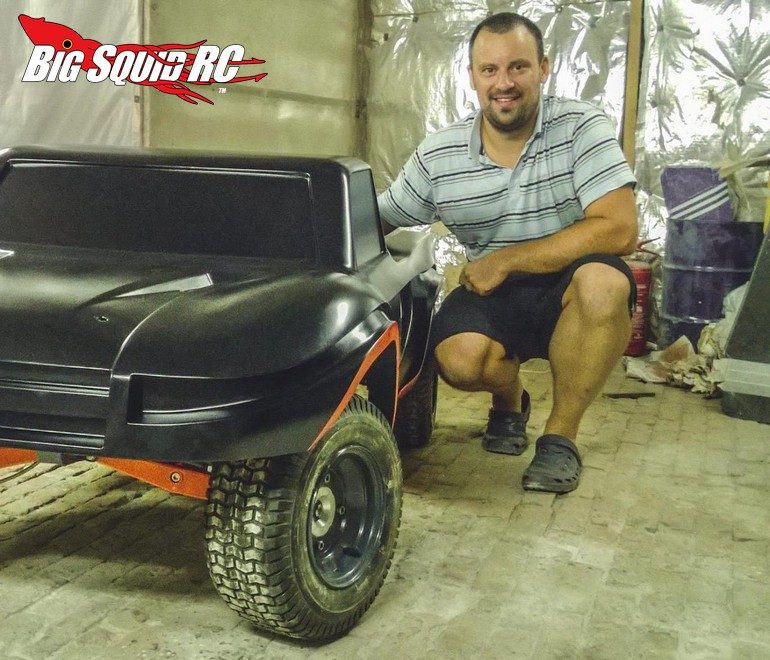 The Mammuth Works Rewarron 1/3 Scale Off-Road Truck has been making some serious waves in the rc industry. It looks to be the biggest, baddest, machine to ever hit the market. No, the Rewarron isn’t shipping quite yet, but for a bunch of eager large scale buyers, that day isn’t far away. We recently had a chance to talk with Attila Kiss, the inventor and main man behind the Rewarron. Below you will find a short interview about why he decided to go 1/3 scale and more of the technical specs found inside his behemoth.

Big Squid – Hey Attila, you are going somewhere nobody else has chosen to go. Why did you decide to put out such a huge 1/3 scaled beast?

Attila – It was a childhood dream to have R/C cars, but only after the birth of my first son could I afford my first car. It was a nitro powered 1:8 buggy. With my brother we drove that thing a lot, but for us it was quite small, because we loved to watch the cars from the outside and see how they behave, how they move. In such a small scale we barely saw anything with the naked eye, not even on video. We also needed superhuman reaction times to control the car on a rough terrain so we were thinking about building a larger and heavier one that looks and moves better. The car was built with the help of one of my mechanical engineer friend in 6 months, this became the Project Mammuth: www.projectmammuth.com.

We received some great feedback during the building and during the testing on different forums (some of our pictures were image of the week on BigSquid :)) we were thinking about continuing this story with a larger 4 stroke engine and with a more complex car. As a software developer I was dreaming about making an on-board telemetry system. We didn’t have the financial background for such a big project so I started to ask in the circle of acquaintances who’d like to join and I found 2 mad man who saw some opportunity in the project. This was the time we decided that we’d like to have a small workshop in the future making large scale R/C cars.

Since everyone had a main job, and the financial possibilities were pretty tight, the first 1:3 prototype (www.projectmammuth.com/second) took a while to make and we had to make lots of compromises. Other than that, the car reached it’s goal: not only did people from the internet turn towards us and started to follow and ask questions but for example the Gadget show from the UK was here to make a short video with the car and we received several invitations to different car and toy shows, not to mention the 2 private investors, who joined us with a more serious financial background. This was 2 years ago and even though everyone still had a full time job, now we had an engineer, we had money for the telemetry system, for the serial production bodywork, and for more precise and better quality components. We had to develop and fine tune several parts of the car until we could finally say: it’s available for pre-order. We are working even harder at the moment to try out as many things as possible, especially in the drive system.

We picked this scale in order to have the best possible behavior while maintaining the R/C feeling. We also choose the 4 stroke engine to have a more serious sound and not a coffee grinder and also, the trophy trucks are the most spectacular off-road vehicles out there in our opinion, and of course we’d like to come out with something different for the beginning.

Big Squid – Do you have any details on the engine? For example, how much horsepower does it have? What size of carb does it sport and what type of air filter does it use?

Attila – We’ll equip the cars with Honda engines that are around 9-10 HP strong, but what’s more important for us is the torque (20-22Nm), what we’ll bring to the rear wheels with a torque converter, to have the best possible acceleration and the highest speed without making an automatic gearbox. Due to the scale of the car we don’t want high-speed (~40-50km/h), we rather want better dynamics.

Big Squid – The shocks on the Rewarron look incredible. What type of shocks are they and how much wheel travel does the Rewarron have?

Attila – For now we are using quad suspensions, which we modify to our needs. They became lighter, we changed the oil inside, made custom springs and we also increased the holes in the inner cylinder in order to got the desired soft suspension. The front travel is 100mm and it has 150mm in the rear.

Big Squid – The Rewarron has been teased for quite some time, what is a best case scenario shipping date on the first units?

Attila – The first pre-order phase will end on the 31st of March. We’ll start those order’s production in June and we’ll ship it in early December. At the beginning, while we don’t have a proper manufacturing schedule, we didn’t want to take a risk. By that time of course the production time will be reduced.

Big Squid – What can you tell us about the body on the Rewarron? Did a particular vehicle inspire its look? What is it made from?

Attila – Let me forward this question to my brother, Csaba, who made the design:

Csaba – The bodywork is completely custom and unique and it doesn’t looks like anything else. The basic dimensions of the frame and the wheels outlined the overall look, so it wasn’t easy to come out with a nice looking, well proportioned body. As you can the see, the naked car looks a lot different, so it was a great challenge to make this! During the first prototype my hands were tied because we had to stay in the budget, but for this one I can almost do whatever I wanted if it looked cool. We didn’t want to copy or alter any already available designs, we wanted to come up with our very own bodywork. Gábor, co-founder of the company who’s team made the bodies did a great job! The car comes with a thick fiber-glass bodywork, but as an addition we can make it out of carbon-fiber as well. Back to Attila 🙂

Big Squid – How about some details on the chassis. What is it made from and what kind of geometry were you shooting for?

Attila – The frame was constructed from steel pipes and we tried to examine as many trophy truck frames as possible and make the necessary changes (we obviously don’t have to be that rigid, because we don’t have drives inside). We come up with a double wishbone suspension at the front and a rigid axle rear suspension, that are also made out of steel for now. Later, we’ll try to make them out of Aluminum to reduce weight.

Big Squid – If our readers are interesting in getting a Rewarron on pre-order, what is the best way to go about it?

Attila – You can find all the information about the car and the pre-order At This Link On Our Website. If you have any questions feel free to get in touch with us: info@mammuthworks.com

So there ya have it folks, some cool inside information on the 1/3 Rewarron. We would like to thank Attila & Csaba for taking to the time to talk to us, our BigSquidRC Bash Crew can’t wait to start seeing these hit the market.