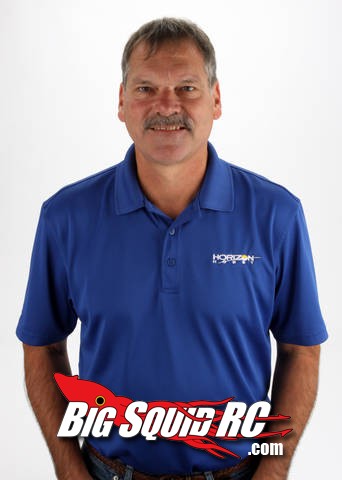 Horizon Hobby has done well with their ECX line-up of affordable and user friendly vehicles. Last week ECX announced two new 8th scale buggies, the electric Revenge Type E and the nitro powered Type N. The two new Horizon ECX buggies are huge news in the bashing world so we got with Lee Morrison, lead developer on the Revenge buggy project, to ask him some questions.

BigSquidRC: Obviously the “Revenge” name wasn’t just pulled randomly out of a hat. The new buggies are ECX’s revenge on who/what?

Lee Morrison: It’s aimed at no one, but is a rough and tumble name that we liked and that the graphic designer for the body took to heart when designing the trim scheme for the body. If you look closely you can make out a Phoenix and Dragon fighting in the art work, his basis being the theme of eternal Yin Yang struggle, whether it is a Phoenix & Dragon, or Electric vs. Nitro. The graphic designer can go on about it more but the product guys just liked the sound of it.

BigSquidRC: You designed the Revenge buggies to take a beating, what do you think are the strongest parts on them, the parts that will never break?

Lee Morrison: Ha, you know that there is always a way to break anything and someone will eventually find out a way to do so. I would say the drive-line parts are the “hardest” to break.

BigSquidRC: Why did you go with 8th scale buggies for your next new products instead of a monster truck or short course truck style?

Lee Morrison: An 1/8th 4WD buggy was a platform that ECX had yet to offer in any scale.

BigSquidRC: Do you have any top speed figures to share with us on the Revenge Type E?

BigSquidRC: I gotta ask, how many trips to Asian for this project?

Lee Morrison: I made 2 trips, Mark Reed (Editors note- Mark is another big name at ECX) made two or three, the quality team spend a lot of time there too. Let’s just say that the team put in a lot of time with the factory to make sure that this product lived up to the Horizon standards. 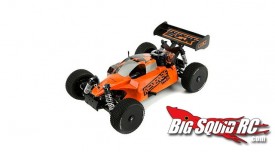 BigSquidRC: The ECX brand is aimed at newbies, is a nitro buggy too big of a first step?

Lee Morrison: We feel that there is more than 1 entry point into the hobby. We talked about this a lot and some feel that the starting point is a slower durable RTR 1/18th or 1/10th scale vehicle. Some feel that a 50mph, 70mph or even 100mph vehicle is.

Truth is, some may wish to enter at another point or they truly want a nitro 1/8th scale 4WD vehicle. Maybe their neighbor already has one or they have seen them run at a track. We wanted to fill that void and offer an entry level nitro 1/8th scale vehicle that is not only durable but is new user friendly and has value pricing point as well.

BigSquidRC: Why did you go with a pull start on the Revenge Type N instead of some sort of roto start?

Lee Morrison: The addition of a roto start AND the starter itself would not have allowed us to hit the price point that we felt would be accepted in the marketplace

The addition of a roto start only (without starter unit) would have added some cost and would still not have been of any benefit to the consumer without an additional purchase.

1. The pull/spin start units from our Dynamite Mach 2 engine are a compatible upgrade (along with the spin starter)
2. The vehicle is starter box friendly without any additional parts required other than the box itself. 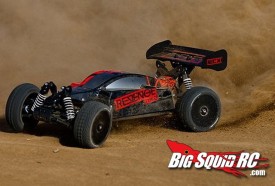 BigSquidRC: What was the most challenging part of designing the new Revenge buggies?

Lee Morrison: Building a user friendly, durable vehicle that has good handling characteristics at a very competitive price point is always a challenge.

Being that the DX2E does not have dual rate on the throttle, the biggest challenge for me was the throttle linkage on the nitro car.

BigSquidRC: If we were going to go bashing right now, and you could only bring one vehicle, which one would you personally grab?

BigSquidRC: Why did you go with a 550 sized brushless motor on the Revenge Type E instead of something larger?

Lee Morrison: Being that are target consumer would be a first time buyer, we wanted to have a vehicle that you could begin to “learn the ropes” on per say with 2S and as you honed your skills move up to 3S and 4S.

Using a 550 (4 pole) allowed us to keep the vehicle’s weight down for good performance when running the lesser cell counts. Do not let 550 size fool you. This 550 4 pole motor gets it on 3S.

Be reminded that a lot of tracks are limiting 1/8th E racers to 2S. This is in no doubt in reaction to overpowered buggies (even in the hands of some not so newb drivers).

BigSquidRC: How much wattage is the Dynamite 550 brushless motor capable of putting out?

BigSquidRC: Is 2S plenty fast for a noobie on the Revenge Type E?

Lee Morrison: I feel that 25mph is a great staring point.

I feel that a lot of recent releases are all marketed towards speed. Beginners/first time buyers and speed don’t mix.

If the vehicle is too fast out of the box to get a “grasp” on – how do you learn?

BigSquidRC: Who would you like to thank for their help on the Revenge buggy project?

Lee Morrison: I have to thank the whole surface team here at Horizon.

To narrow it down to one, two or even a half dozen would not be fair. It was a true team effort.

I will mention that if it were not for my father who passed away just a few short weeks ago, this vehicle or maybe even my current career would not have happened.

My dad had a love for RC hobbies and introduced it to me at a very young age. Been totally hooked ever since.

I dedicate the release of the Revenge to him and hope that this vehicle will allow todays fathers introduce their boys and girls to get bit by this great hobby.

BigSquidRC: Anything else you would like consumers to know about the Revenge buggies?

Lee Morrison: Couple other things that I would like to mention:

It’s easy to convert from one to the other.