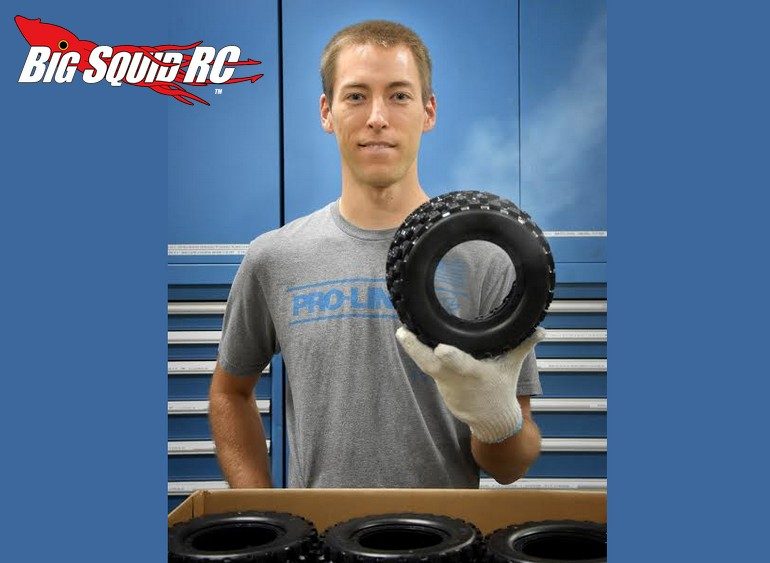 First announced several months ago, we were very intrigued when we saw Pro-Line’s MX43 Tires & Impulse Pro-Loc Wheels for the Traxxas X-Maxx. Not only were they specifically designed to reduce tire ballooning, but they also use a new style of bead to totally eliminate tires coming off the wheel. After giving them a severe workout during our Review Process, Cubby wanted to learn more so he got with Vance Lund of Pro-Line Racing to ask him a few questions. Enjoy the interview below.

BigSquid- Hey Vance, thanks for taking the time out of your busy schedule to answer some questions for our readers. As one of the main people behind Pro-Line’s Badlands MX43 Tires & Impulse Pro-Loc Wheels for the Traxxas X-Maxx, who were some of the other people that aided in the design, and what were your primary goals on the project?

Vance- Hey Cubby! I’m glad to contribute to your awesome site. Let’s begin with the concept. When the X-Maxx started taking off, the limitations of the stock wheel and tire package became clear to us so the whole team here got to work. Tim came up with the through bolted bead concept to ensure no bead failures, Aaron designed a nearly unbreakable wheel, Gerardo laid out a burly and good looking tire, Matt developed the rubber compound, and I just tweaked a few things around to make them compatible and moldable. That’s just the start for us though. With in-house tool making and manufacturing, everyone had a hand in bringing the MX43’s and Pro-Loc wheels to life.

BigSquid- The compound used on the MX43 tires is much harder than a normal tire. Can you talk about why the compound is as hard as it is and does that particular compound have an official name?

Vance- After a couple rounds of testing, we quickly realized that a relatively hard compound was needed to remain stable and resist wear. Also, a high tensile modulus keeps them from ballooning excessively which makes them stable at high speeds and a high tear resistance keeps them from ripping apart. What’s cool about the compound we ended up with is that it’s great on all kinds of dirt and grass yet it holds up to run after run of doing donuts on asphalt.

BigSquid- To help keep the beads of the MX43 tires from coming loose, you used good old fashioned bolts to make sure they stay put via the Pro-Loc wheels. Why did you decide to go with bolts instead of another mounting method?

Vance- The Pro-Loc design makes the beads very secure without using a massive amount of rubber or concentrating stresses in a narrow bead. The geometry of the tire, wheel, and beadlock ring may be a little complicated but the assembly is simple. When you run a 20mm long screw through the bead of the tire, there’s no doubt it’s going to hold. Glue-on tires and other beadlock styles can have a certain vagueness that the Pro-Loc system eliminates.

BigSquid- We’ve been using those tires and wheels on our staff X-Maxx for quite some time now. We have to give you and the Pro-Line crew some big props for creating a set-up that can withstand the daily beatings of a basher, while producing some massive traction on loamy surfaces. Pro-Line is known for always pushing the envelope of technology, do you think there are going to be more Pro-Loc wheels coming in the future for other vehicles?

Vance- Yes. Customers are already asking for Pro-Loc adaptations of other tire sizes and we are developing them!

BigSquid- We are super stoked that you could spend some time with us. To wrap up this interview, is there anyone you would like to thank out there?

Vance- I’ll speak for the whole development team and say thank you to the Pro-Line toolmakers, production team, and packaging team. We are constantly throwing them curve-balls; they adapt and make us world class. Also, thank you to all of our customers for supporting American made products!

Once again we would like to thank Vance for taking the time to talk to us and to give you, our readers, and insiders look at Pro-Line’s X-Maxx wheels and tires. To get more details on them, you can use This Link for the Badlands MX43 Pro-Loc Tires or This Link for the Impulse Pro-Loc wheels.