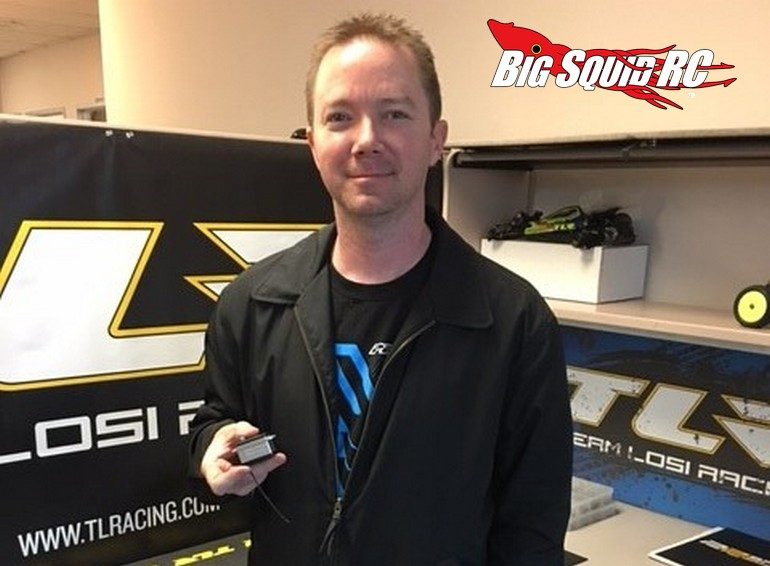 A few weeks ago Spektrum announced their innovative S6240RX Servo. Servos don’t usually get a lot of attention, but the Spektrum unit is quite unique as it features a built in receiver. The BigSquidRC Bash Crew decided to get with Spektrum to learn more about it, and while we had them at our ear, to ask a number of other questions. Enjoy the interview below with Spektrum’s Ryan Dunford. Ryan was nice enough to give us some of his time and to answer various other questions that we’ve had floating around our heads about Spektrum products.

Big Squid –The new S6240RX was a fantastic idea, rarely does a servo make big news in the rc biz. Who came up with the idea originally and who was the lead on the project?

Ryan – The idea for this project came from a group discussion about where some aspects of RC are heading and the need to save space in 2w cars for carpet and astro turf. Eliminating components frees up space and that is where the idea of taking our already shorter S6240 and combining it with are SR2010 race receiver. This makes it so you have more freedom in your electronics and battery layout for moving weight around for carpet and astro turf racing. The servo also works great in many other applications where space and weight are a concern. Combining the servo and receiver also helps minimize chassis clutter.

Big Squid – Do you have any cool “behind the scenes” stories about the making of the S6240RX?

Ryan – This poor servo/receiver has been through many iterations on the drawing board to try to make it applicable to more areas of RC. Originally the servo leads were going to go directly into the bottom but then that didn’t work for many vehicles on the market so we moved them to the side. It is also pretty cool that we added a receiver to a very short servo and still only added about 1mm more to the height which is still much shorter than a typical standard sized servo.

Big Squid – Any chance of AVC being added to your servo/receiver combos in the future?

Ryan – We really want to see how this servo does before we look into other areas to move into at this time.

Big Squid – Over the years Spektrum radios were known for not having the longest range. While we have been working on our review for the DX6R we measured range at a 450 foot radius, but still had full control of our car, we simply ran out of parking lot. What has Spektrum done to increase range and should consumers be seeing increased range on all models of transmitters, or just higher end units?

Ryan – Range is always a huge issue with RC remotes, especially as innovations like FPV come about. Increasing the range simply makes it better for all aspects of RC from the basher to the racer. We typically shoot for at least 800 ft which for a 1/8th vehicle is still very difficult to even see and control but the more range the better. Some racers think range isn’t important though as even the largest tracks are around 200 x 200 feet so why do they want it to go further than that. The reason is the signal quality. Radios send out a bunch of individual packets and the more of those packets that aren’t missed or dropped, the more connected they feel. Packet loss typically comes with long range. So, the better the range, the better the signal quality typically and the more connected everyone feels. Our engineers work very hard to make sure we have the best signal quality at our minimum ranges. The DX6R and DX5R use our latest RF modules and it is easy to tell.

Big Squid – We have been playing with a Spektrum FPV set-up for a couple of months now. We’ve been having a lot of fun with it and will be posting a write-up in a few weeks. Spektrum has jumped on the FPV bandwagon more heavily than a lot of other companies. Where do you do see FPV in the surface world 5 years from now?

Ryan – FPV for surface is a ton of fun actually. We have taken some of the items from planes or quads and strapped them to our cars and played with them. What we have found is that even 10 real MPH feels incredibly fast when you have those goggles strapped on. When you try it in a typical RTR 40-50MPH vehicle…just think warp speed. I think there may be a space for it though. I don’t think it will replace what we are doing today but in certain applications, such as scaling, I think it would be amazing.

Big Squid – You guys over at Spektrum love to lead the pack. For example, you introduced 2.4GHz tech to market way back in 2004 and AVC electronic stability control back in 2013. Do you have any teasers to give our readers on what we might be seeing from Spektrum in the future?

Ryan – Well, we released a full color touchscreen surface radio that uses wifi, Andorid, and bluetooth, the DX6R as you know which is pretty innovative and was a ton of work for the team. We have some great ideas brewing and it should be an interesting and exciting next couple of years for Spektrum.

Big Squid – It has been great getting a chance to talk with you Ryan, do you have anyone out there that you would like to thank?

Ryan – I would like to thank the management staff here at Horizon, Erin Jesswein, Blake Good, Dave McCallister, and John Adams for supporting me and allowing me to make some new and fun products such as the DX6R, DX5R, and S6240Rx. But really, a big thank you goes to the customers out there that really push us to produce these innovative products.