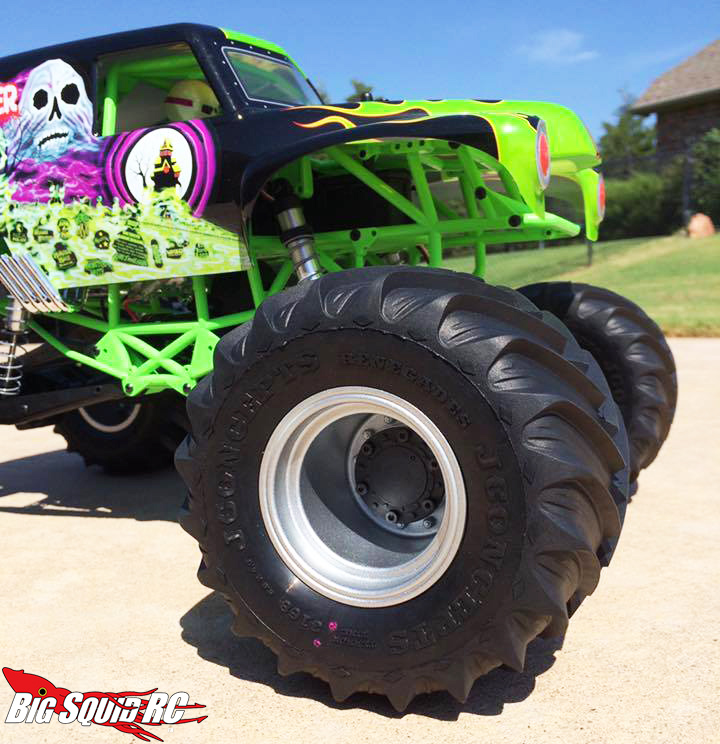 JConcepts has just released a teaser picture of a new monster truck tire & wheel, which is mounted up to an Axial SMT10 Grave Digger.

The 2.6 sized tire (Clod), called the Renegade (as seen on the sidewall), has a very aggressive tread that mimics a hand carved 66″ Goodyear Terra that has long been popular with full size trucks.

Many long time monster truck fans will dig the name, as it hearkens back to the TNT Renegades Monster Truck Challenge that criss crossed the nation (and tv sets) back in the late 1980’s.

Also of note is that you can see the pink dot, which means it’s medium-soft compound. 2.6 tired monster trucks get a lot of grip by way of the massive tires, so this compound will hopefully allow a bit of give when sliding your beast around a corner while still providing forward bite.

The trick looking wheels currently do not have any info released (or a name) but based on the vehicle they are mounted to, one can infer is most likely uses a 12mm hex drive.

No official price or information has been released as of this writing, but JConcepts will be on hand to show them off at this weekend’s Trigger King R/C monster truck race in Missouri and we should have more info shortly after that.

You can hit up the JConcepts Website here, or you can Click Here for other JConcepts news on BigSquidRC.