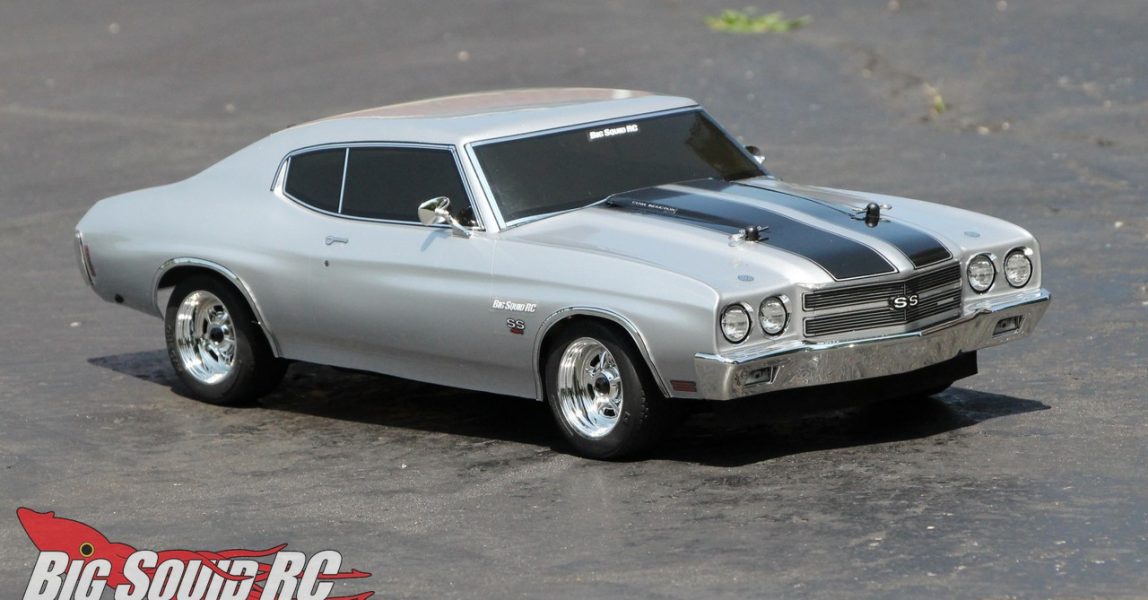 Scale realism has taken over the rc world. Evidence of this can not only be seen in the rock crawling world, but also on-road. A great example of this is the Kyosho 1970 Chevelle SS 454 LS6. The Kyosho Chevelle comes with one of the best looking bodies that we’ve seen from Kyosho, plus it sits on the very basher-friendly Fazer Mk2 chassis. We’ve been bashing and hucking the Chevelle so you don’t have to. It is a beast? Is it fast? Can it take a hit? Read on for the good stuff…

Primary Competition: Ya know, there are some pretty cool cars in the scale 1/10th on-road category. Kyosho has others like the Dodge Challenger SRT Hellcat, plus Vaterra has numerous scale looking 1/10th on-road bashers, etc.

What’s Needed To Complete: To drive the Chevelle you will need to supply a battery to power the car, along with a charger for that battery. You’ll also need four AA cells for the transmitter. A simple set of tools do come with the car.

Build Quality: After letting the car go from hand-to-hand to all our testing goons, they could not find a fault with how the Chevelle was put together. The shocks were well filled and not leaking, all the hardware was tight, and we couldn’t find any unusual binding. The pinion/spur gear mesh was dialed too.

Test Drivers: Ya know, we had a lot of guys volunteer for this one, including various muggles when we were out testing. For our core group, we had Iron Mikeee, THE RC Kid, Sam The Noobie, T-$$$, plus good old me to help thrash the Chevelle to an inch of its life.

Test Venues: As we did very little off-road testing, we mostly drove the car on local streets and empty parking lots.

Set-up Notes: To power the mighty 454 SS, we used a 2S MaxAmps 5250mAh LiPo battery. We also used MaxAmps AA cells in the transmitter. Charging duties were handled with style by a Hitec X1 Pro.

Turning: The car’s turning is set-up for realism. What does that mean? The Chevelle looks scale when being driven, and that translates back to the driver at the transmitter. For example, the car is properly sprung, but has been tuned lightly on the damping. This gives the rc version plenty of chassis roll, and a bit of bounce, just like the full sized original. Yes, it is fun to just sit back and watch the Chevelle curve up corners because it looks so realistic. Furthermore, its tires aren’t ultra-grippy, so it has some slide in corners. So while you won’t win any rc car races with the Chevelle, it will absolutely win your heart over with the scale manner in which it corners.

Jumping: Get some!!! Actually, we kept the airtime to relatively “scale” levels and had a blast with the car. No, on-road cars don’t jump worth a hoot, but at least the Chevelle jumps in a scale manner (ever see a 1:1 Chevelle SS send-it?).

Bumps/Whoops: Why are we even including bumps/whoops in an on-road car review? Well, because there is something to note here. Kyosho tuned the stock suspension to give the car a “scale” look when hitting bumps. Stock, the car is a bit on the bouncy side, with generous amounts of chassis roll, just like the full sized car. So, while you definitely don’t want to point the Chevelle WFO at the gnarliest whoop section at your local track, it should be noted that it looked very scale crossing the typical sized bumps that you find when driving on public roads.

On-Road: So, as an on-road car, how does it do? First off, it looks and drives in perhaps more of a scale manner than we’ve ever seen from an on-road car. And two, it is loads of fun. No, it doesn’t have incredible corner speed, but it is loads of fun to corner with. No, there isn’t a ton of power on tap, but there is more than enough for burnouts and having fun (the top speed suits the suspension well). As you drive, you feel some sway from side to side, just like you would in a 1:1 Chevelle.

Grass: Ya, this would be a hard “NO”. There just isn’t much ground clearance on the Chevelle. Still want to drive in grass? We can highly recommend the Kyosho Rage 2.0.

Tires: The stock tires are molded from a medium compound rubber. Now, softer rubber would give the car much more grip, but that would take away from the scale driving prowess of the Chevelle. As is, the tires slide a bit in corners, just like a 1:1. This not only looks “real”, but also helps to keep the car from traction rolling. Oh ya, the tires look awesome with scale grooving, plus they held up quite well for us.

Power: The power is perfect, albeit a bit fast, for new drivers. First time drivers get a good shot of “Wow, this is fast!”, without the Chevelle being so overpowered that it causes constant mistakes (read- crashes). On 2S LiPo we found the car could easily “burn rubber” from a dead stop, just as it could easily do WFO “donuts”. Top speed isn’t crazy, but it pushes the boundary of the car’s suspension to about its max. Oh and ya, we thought it had enough power to be fun for experienced guys too. Not crazy 6S fun, but because of the tuning of the suspension, even experienced drivers had fun just watching the car as they drove.

Radio: We have no complaints about the included radio. We experienced no glitching and the ergonomics worked well for the majority of our tester drivers.

Broken Parts: With smart engineering, soft plastic, and brushed power, we found the Chevelle to be quite durable. Yes, you can tap curbs, catch a bit of air, and generally drive it like Bo Duke on crack, without having to worry much about breaking a part. In the end, we broke a steering block after a particularly nasty hit to a concrete step.

The stock servo is a bit slow, but has more than enough torque for the job.

A “t-style/Deans” connector? Thank you Kyosho! Deans connectors are super common and work perfectly in this application.

What about the stock gearing? We shot the motor at 170 F after a 5 minute run at 85 F ambient temps. To us, the gearing is in the ballpark, but you should monitor temps on hot days and on longer runs.

The Kyosho uses bolts to hold the wheels on instead of nuts. This is common in the racing world, and is arguably good to see on the Chevelle.

With such an incredibly scale body, we would liked to have seen the Chevelle come with hidden body mounts. The first thing that grabs your attention that the Chevelle is an rc car is its body clips. We would love to see it with hidden mounts to make it even more scale looking.

While not something that lead to the end of a driving session, one of the front driveshafts would occasionally pop out of place when hitting hard objects.

Time To Bash: B The Kyosho comes completely pre-assembled and painted. All you need to do in pop in some batteries before you can start tearing up your cul-de-sac.

Workability: B A nice open layout, one that is held together with decent quality hex hardware, makes the car very easy to wrench on.

Car Show Rating: A The pictures just don’t do this car justice. It looked so gorgeous in-hand that we almost felt bad sending-it (Almost!).

Bash-A-Bility: B The Fazer Mk2 chassis was very durable. With softer plastic and a keen design, we didn’t have any issues tapping a curb now and then.

Fun Factor: A With killer looks, scale handling, and enough power to keep things interesting, we had a really hard time prying the controller away from test drivers.

Handling: B No, the Kyosho isn’t going to win the IFMAR worlds, but it drives in a scale manner that is easy for first timers to get used to.

Value: B A $299 price point makes it easy for nearly anyone to put the Kyosho in their garage.

Parts Availability: C After doing some searching at our local hobby shops and on-line, we gave the Kyosho a “C” score. While we were not able to find parts locally, they were easily found on-line.

BigSquid Rating: B+ The Kyosho 1970 Chevelle SS 454 LS6 looks sweet and is loads of fun to drive. The Chevelle not only looks scale, but also drives in a scale manner. We are big fans, cut the check already!