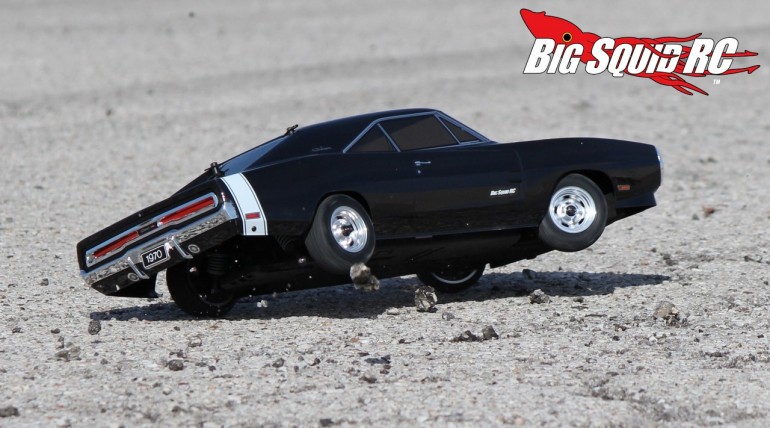 Everything we have posted about the Kyosho 1970 Dodge Charger has gotten a lot of hits. In fact, more hits than any on-road car in recent memory. Is that due to its tough muscle car look? Maybe it’s due to the Orion dDrive system that sits under the hood?

We have been bashing the daylights out of our Kyosho test unit for weeks now, keep on reading to find out the highs and lows of the old school Charger…

What’s Needed To Complete: Not much, just four AA batteries for the transmitter.

Build Quality: Overall very good, but we did find that one of the front shocks was a bit low on oil.

Test Venues: A park in Arnold Missouri and the parking lot of our local CostCo.

Set-up Notes: We didn’t change any chassis settings, or really anything else during our review of the Charger. We ran the stock NiMH about half the time, but also used a MaxAmps 2S 6500 LiPo. We did skip the included wall charger in favor of a Hitec X2 AC Pro.

Turning: The Kyosho had a bit of push going into corners, but generally cornered quite well. During and after apex, the front wheels tended to stick, with the rear keeping right in line unless you were really pounding on the throttle. When hitting the gas hard after the apex the rear did have a tendency to swing out. Cornering the Charger fast did take a few minutes of practice, but nothing insane. Also of note, we did find it easy to drift with the rubber tires when driven on slicker surfaces. No, you don’t see a lot of muscle cars drifting, but we had a ball doing so.

Jumping: Did we catch a lot of air with the Charger? Is Donald Trump full of crap? Of course we did. And no, it wasn’t designed to huck triples, just like every other touring car based chassis on the planet. Jumping the Charger was a lot of fun, but it landed like a ton of bricks and wind liked to push it around while airborne. On a high note, we had a blast pretending we were driving the Charger in some crazy action flick from the 1970s, jumping pretty much everything in sight.

Bumps/Whoops: No, the touring car based Charger can not pound through the whoops, nor can it soak up pot holes on pavement like an off-roader can. However, it looked very realistic when hitting bumps. It had some bounce to it, just like a full sized Charger would have. It did easily soak up small bumps and rock pebbles on smoother surfaces, but big pot holes or legit jumps had it bouncing all around.

On-Road: With the Charger being based on a touring car platform, this is where it was at its best. The big news here is that with its stock suspension settings, it looked like a full scaler when being driven. Not just from its body, but the way it rolled and hit bumps. The Charger was set-up out of the box to be slightly bouncy, which wasn’t the best for control, but sure made it fun to drive, while giving it more of a scale look.

Grass: Yes we drove it in grass (or attempted to) and no you don’t want to. The Charger simply wasn’t designed for grass, if that is the only place you drive, you’ll want to look elsewhere in the Kyosho line.

Tires: We really liked the stock tires. They had a great scale look to them and they were molded from a soft compound for plenty of grip when driven on pavement. Their tall sidewall and old school style tread made them very scale appropriate, but they did have one downside, they wore out quickly. Most of the tread on the tires was gone within the first three packs. The Charger also comes with a complete set of drift tires, which we did not test. The drift tires are a modern style and hard as a rock, which should work well if you want to be the only guy at your local drift club slinging around a muscle car.

Power: A whole lot of people are curious about the Orion dDrive system that comes stock in the Charger. So here is the scoop- it didn’t run hot and had decent power. It didn’t have outrageous power, especially on the stock NiMH, but when run on LiPo (where we measured it instantly gained 4 mph) it had more than enough yank to keep even seasoned drivers smiling. The dDrive was really smooth through its entire powerband. It didn’t have an rpm point where the power massively kicked in, making it really easy to drive. Btw, motor temps were quite low for us. In fact, we found that the NiMH battery was running much warmer than the brushless motor did. All of our testing was in cooler temps (sub 40 F), but the conservatively geared (and low kV) dDrive was one of the coolest running RTR brushless motors that we’ve been around.

Radio: All of our testers really liked the Syncro KT-231P that came with the Charger. Why? Because it felt exceptionally nice in the hand for an RTR radio. Its wheel was foam covered and was set off at an angle for driver comfort, which was nice. However, the best point on the KT-231P was its rubber covered hand grip. For performance we never had an issue with range or glitching.

Broken Parts: We found the Charger to be a tank. Its relatively slow top speed certainly helped, but so did its huge body and large touring car foam bumper. From day one of testing we drove it like we were in an old Hollywood movie and just couldn’t get it to break.

Oh yes, we have to talk about that gorgeous body that comes on the Kyosho. Not only does it look awesome, it can also take a beating. We cartwheeled the Kyosho dozens of times and the stock body is still in decent shape. And because of its size, the body also takes the majority of abuse when hitting curbs. To boil it down, we were amazed with how well the body held up.

One thing that did not hold up was the rear-view mirror. The mirror broke early in testing, but then it was quite small and we didn’t miss it after it was lost to the great rc parts Gods.

There are a bunch of vent holes in the Orion dDrive brushless motor. That is great news for cooling. That is terrible news when driving on gravel or around sand.

On the stock NiMH pack our car acted like it was hitting LVC at various times when being driven. We didn’t check it, but a NiMH car shouldn’t ship with its LVC enabled. When driven on LiPo we did not experience that issue.

Boy it was nice to see the Kyosho came with a nice, thick, old school paper manual. It explains everything you would ever want to know about the car and then some.

The stock servo is nothing fancy but gets the job done. A couple of review staff thought it was a bit on the slow side, but others never noticed it. What all our testers did notice was the extremely soft servo saver. A soft servo saver is a great idea for protecting the servo, but when too soft like in the Kyosho, it can make the steering feel mushy and imprecise.

Best Mod: LiPo!!! While the stock pack is fine for playing around, a decent LiPo instantly gives the Charger significantly more yank from a dead stop and 4 mph more top speed.

Time To Bash: B We found the Dodge Charger to be quick and easy to get running. Simply charge up the included stick pack, pop four AAs in the transmitter, and get ready for serious bashing action.

Workability: B While we were not fans of the included Phillips head screws, the Charger uses a standard TC layout and was easy to wrench on.

Car Show Rating: A The Charger simply looks bad ass. All of our testers loved how it looked. The body is ultra-sharp and its wheels/tires were spot on. Great job Kyosho!

Bash-A-Bility: A The Kyosho is also a tank. We really hate giving out an “A” in any category, but the Kyosho earned this one the hard way.

Fun Factor: A No, it isn’t crazy fast, but it has enough power to be fun, all the while looking scale when being driven. It had the bounce & roll that a 70s muscle car would have, so it actually looked scale when flying around a parking lot.

Value: B Ok, so lets look at the Kyosho’s competition. Vaterra has a bunch of scale looking cars to compared to the Charger. The Vaterra’s are priced at $249 with brushed systems and when they come with brushless they are priced at $349, the same price as the Kyosho. After looking at the competitors we felt the Kyosho was a very good value.

Parts Availability: C Lets face it, Traxxas is the king of parts availability. No, you won’t find parts for the Kyosho on the pegs at most local hobby shops, but after a quick on-line search they are readily available. The Kyosho Fazer line (which the Charger is part of) has been out for quite some time, thus the reason many of the parts are easily found.

BigSquid Rating: B Have have to thank Kyosho, they have got us interested in on-road driving again thanks to their 1970 Dodge Charger. No, it doesn’t drive like a super planted high-end touring car, it drives like the real deal, which added a lot of charm for us. It has a fantastic looking body and its dDrive Orion powerplant does a solid job of giving it muscle car type performance. Buy one, you’ll have a blast with it.