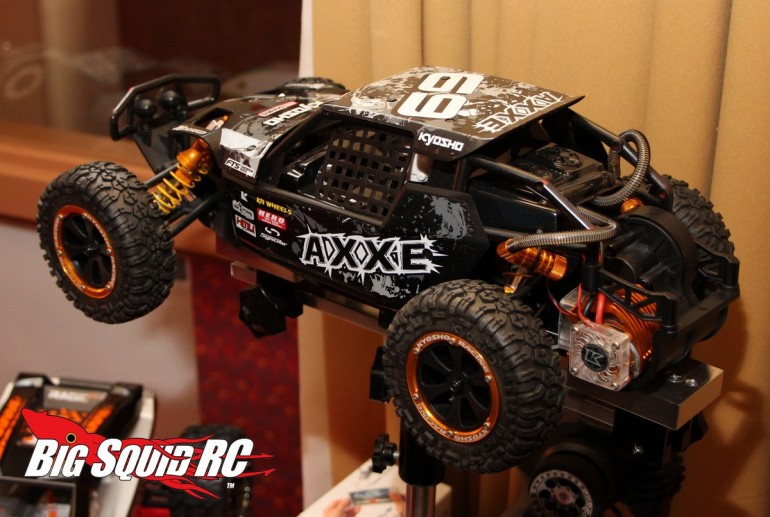 Another big supporter of the 2015 HobbyTown USA Convention was the friendly folks from Kyosho America. If you’ve been reading our front page lately, then you’ll already know that Kyosho has announced a bunch of new products this year and many of them were on display in their room/booth at the show. Some of the highlights were-

* Our Bash Crew was immediately attracted to the new Syncro Touch Transmitter. The Syncro Touch has a big bright LED touch screen that makes changing settings a snap and it works with a bunch of different Kyosho products. After passing it around the crew, we really liked its ergonomics, especially its drop down wheel and light weight.

* The Kyosho Jet Stream 600 boat was recently announced and it was on display at the show. It promises affordable ($159!) performance and comes with our favorite feature on any boat- self righting.

* Kyosho’s tiny i-Driver Pocket Armour Tanks ($49) were on display and we were blown away with their scale detailing. These are controlled by a smart device and have all sorts of cool sound effects.

* A fully loaded version of one of Kyosho’s Axxe buggies was on display and looked really trick. It was also equipped with Kyosho’s on-board surface iReceiver FPV systems.

If you would like to learn more about all the cool products from Kyosho America, check out This Link or you can read more of our 2015 HobbyTown USA show coverage by Clicking Right Here.