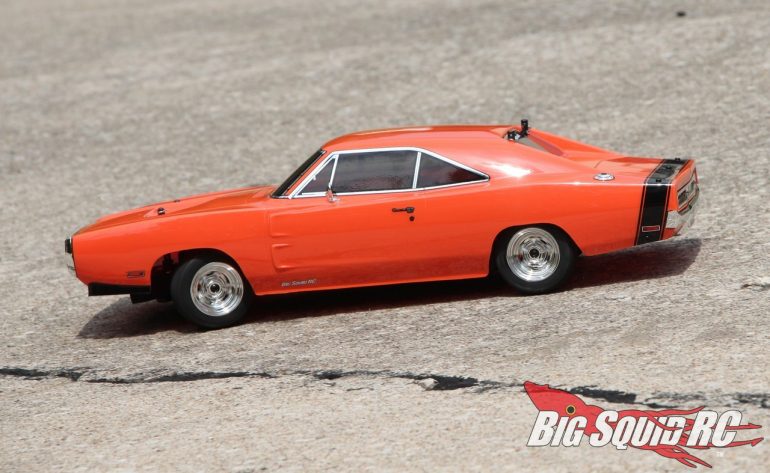 Primary Competition: Ya know, we are starting to see more scale looking 1/10th on-road cars. Kyosho has several offerings, as does Vaterra, to go along with various other brands.

What’s Needed To Complete: You won’t need a whole lot to get the Kyosho up and running, just a battery pack for the car, some AAs for the transmitter, and a battery charger. Otherwise, the car comes completely assembled and ready to jam.

Build Quality: After a half dozen members of our test crew got a chance to look over/take apart the Kyosho, we could find no fault with its build quality. There wasn’t any binding, the shocks were full and not leaking, the pinion/spur mesh was spot-on, etc.

Test Drivers: For the old school K-car we had numerous testers behind the wheel. Iron Mikeee, Robbie G., Hawaiian Chris, T-$$$, along with yours truly, did the majority of the wheel time.

Test Venues: With the St. Louis metro area still covered in flood waters, most of our favorite parks/bash-spots were no bueno. Therefore, most of our testing took place at our local Costco parking lot.

Set-up Notes: Like we normally do, we didn’t change a thing on the Kyosho for the review. Gearing was stock, tires were stock, etc. However, in the transmitter we used four AA cells from MaxAmps, and to power the car we popped in a MaxAmps 2S 5250mAh LiPo. Charging duties were easily handled by a Hitec X1 Pro.

On-Road: On-road is exactly where the classic Charger was designed to rip, how did it do? We found that the Kyosho was set-up for a scale look when being driving. The suspension was set from the factory to help the car appear “scale” while flying around your cul-de-sac, so it won’t be breaking any lap records down at your local track. The Charger really did look scale when driven, meaning it had lots of sway in the corners and some bounce over bumps. The extra bounce in the suspension gives it a scale appearance, but does make it a bit harder to control.

Steering on the Charger works a bit better to the left than the right, especially in tight corners, but overall it is easy to get around a corner. BTW, we were not able to get it to traction roll, regardless of speed or grip levels, unless we caught a bump or groove in the pavement. Overall- we found the Kyosho easy to drive, perfect for new drivers (and was still fun for experienced guys).

Jumping: No, the Kyosho was never designed to huck the triples down at your local track. Small, scale sized jumps are easily handled in stride, but truly sending-it is much better suited to the off-road offerings from Kyosho.

Bumps/Whoops: With the Kyosho being an on-road car (light damping/very little travel), Supercross style whoops just aren’t in the cards for this muscle car.

Grass: While the Kyosho can handle the shortest of grass, “normal” height grass (think 2″ or taller) will stop it dead in its tracks. Like the jumping section listed above, if grass is your preferred venue, we would recommend that you look at a dedicated off-road machine.

Tires: We were big fans of the stock kicks. They have a great scale appearance, but more importantly, they yield decent grip, while not giving so much as to cause traction rolling. The wheels are also very nicely done.

Power: A brushed motor is used to power the classic Charger and it puts out what we consider to be the perfect amount of power for new drivers. It has enough low end grunt to slightly spin the tires at launch and while doing donuts, the mid-range is easy to drive, and it tops out at 26 mph.

Radio: The included 2.4GHz radio system worked fine for us. While not a high-end race unit, it gets the job done. Ergonomics are decent for a variety of hands, but what we liked most was its easy to adjust throttle EPA. The EPA is a small dial on top of the radio which takes only a couple of seconds to reduce power with before handing over to a less experienced driver.

Broken Parts: With a lot of body up front and a large foam bumper right behind that, the Charger was able to take a hit in stride without breakage. We just kept on driving the wheels off the thing until one of our test drivers thought trying to jump a full sized car was a good idea (it was not, LOL). After a very poorly executed full sized car jump, we ended up breaking a rear arm.

Yes, yes, and more YES! Thanks for the Deans/t-style connector on the speedo Kyosho! So very nice to see a common connector on a car for a change!

While the car looks absolutely incredible, we couldn’t help but wish for some hidden body mounts…

Some basic tools come with the car, a nice touch for new hobbyists.

We had no issues with the stock servo. Torque is plentiful enough to easy sling the front tires around, but it is a bit on the slow side for experienced drivers.

Motor temps on the Kyosho were right in the ballpark. On a 90 degree F day, we saw motor temps around 170.

Best Mod: Hey, just like in our review of the Kyosho Chevelle, we are going to recommend some type of electronic stability system for the Kyosho. Whether you pop a stand alone gyro into the car as it is, or if you drop in a DX5 Rugged with an AVC receiver, some form of stability control instantly makes the Charger easier to drive.

Time To Bash: B It took us about 10 minutes to take the car from the box to pavement (we were using a pre-charged MaxAmps 2S LiPo). All you need to do is pop in some batteries and the fully pre-assembled Kyosho is ready to burn tires.

Workability: B We loved the nice open layout of the Fazer Mk2 chassis. Also, decent quality metric/hex hardware is the norm for Kyosho, very nice.

Car Show Rating: A And it looks EVEN BETTER in person! Some of you older readers simply will not be able to resist the beautiful scale looks of the Kyosho Dodge Charger. Kyosho did a fine job on the body and wheel/tire combo, we (almost!!!) hated to take it out and bash it!

Bash-A-Bility: B Our test unit was solid. Yes, we did break it, but then that’s just what we do. 🙂

Fun Factor: A When we reviewed the Kyosho Chevelle a while back, we had way too much fun for a “simple RTR”. The same held true for the Kyosho Charger. That combo of scale looks, scale driving, along “realistic” speed (it is not crazy 6S powered), always kept our Bash Crew members asking who got to drive next.

Handling: B Scale realism anyone? The Charger drives in a scale manner with plenty of chassis sway.

Value: B At just over the $200 price point you are getting a fantastic looking car, that is also a blast to drive.

Parts Availability: C We did not find parts locally, but were easily able to find spares (and hop-ups) on-line.

BigSquid Rating: B+ Kyosho is known for winning world championships, but they also build some stellar bash-mobiles. Their 1970 Dodge Charger looks fantastic and even drives in a scale manner. We are big fans and can highly recommend the Kyosho Dodge Charger to you.