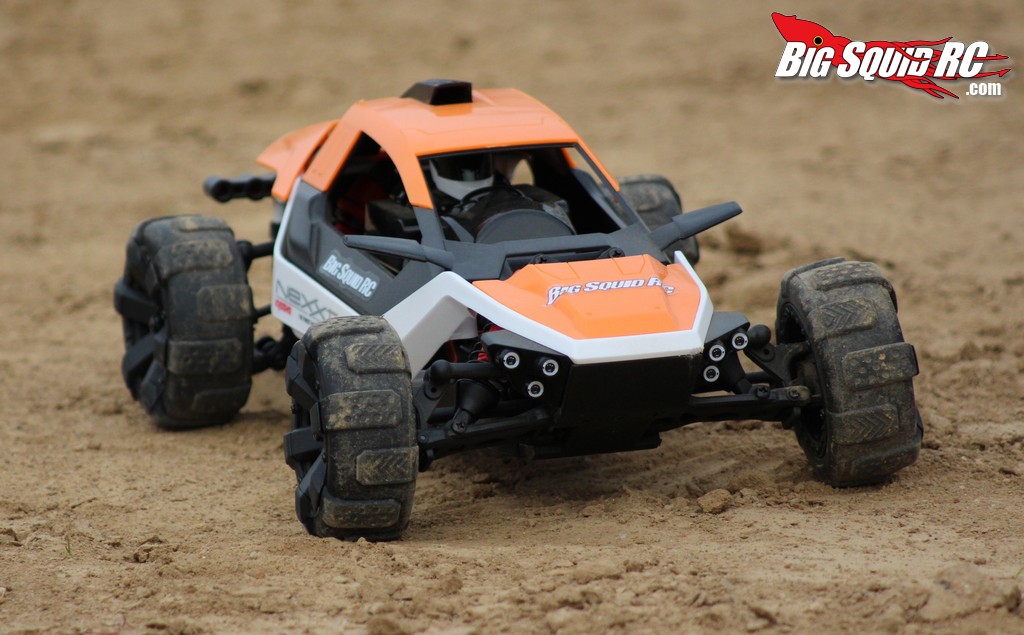 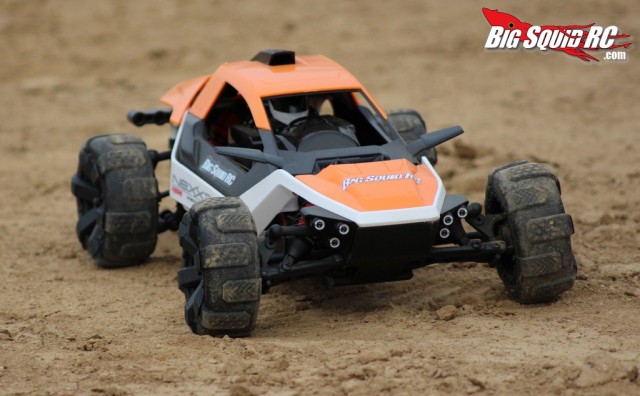 When the Kyosho NeXXt buggy was first announced certain staffers of ours couldn’t wait to get their hands on the unique “moon buggy” looking vehicle, even though it was aimed directly at entry level enthusiasts. How does the NeXXt drive? How does it hold up to abuse? Does it turn heads at the track, and most importantly, is it worth buying? Read on my friends and let’s find out…

What’s Needed To Complete: You’ll need 4 AA batteries for the transmitter, a 6 cell Ni-Mh battery for the buggy, and a battery charger.

Build Quality: We found strange noises while rolling the buggy, lots of slop here and there, and one of the rear wheels has been reluctant to come off.

Set-up Notes: We used Venom AA batteries in the transmitter, we used a MaxAmps 2S 4200 mah Lipo to power the truck, and a Dynamite PassPort Ultralite charger was used to power up the battery.

Turning: The NeXXt exhibits some under-steer on most surfaces, thus making it easy to drive for noobs (that have a tendency to over correct). However, it has virtually no side-bite, meaning it can not carry much corner speed and literally drifts through most corners (on dirt and on pavement). The NeXXt is easy to drive in the corners, just don’t expect it to get turned in a hurry.

Jumping: Taking off from a jump face is quite interesting with the NeXXt, but not nearly as interesting as its landings. Those friction shocks combined with massive bump steer and radical camber change during the suspension stroke results in some mighty strange jump launches. When landing, once the NeXXt hits the ground (and blasts through its suspension travel) get ready for a crazy ride while it bounces around trying to regain its composure.

Bumps/Whoops: Low ground clearance combined with small diameter (and no traction) tires plus friction shocks equals an old school wild ride through the rough stuff. When you point the NeXXt into a rough area and pin the gas you really have no idea which direction it’s going to come out. This is the worst vehicle I’ve driven in the rough since sometime in the 80’s. If you like crashing or getting high centered in the rough, the NeXXt is totally dialed.

On-Road: The lack of any front or rear side-bite on the NeXXt results in no traction rolls, and I mean ever. On-road the NeXXt has a bit of under-steer making it fairly easy to drive, well, except for when you want to drive it in a straight line when the NeXXt refuses to center properly resulting in constant course corrections.

Grass: You do not want to drive the NeXXt in grass. The combination of the small diameter tires (that have about as much traction as slicks) and low ride height result in a buggy that gets high centered even in very short grass.

Tires: Wow, there is a lot than can be said about the stock moon buggy tires. On pavement they drive a bit like paddle tires do, meaning they are very bumpy and jostle the buggy around unnecessarily. On dirt they offer little to no traction, about like slicks. On every surface they offer virtually no side-bite. The only redeeming value of the stock tires is their unique look.

Power: We measured top speed at 20 mph (on a 2S Lipo) which is right in the ballpark for what newer drivers can control. The power was typical sealed brushed motor- soft on the bottom with a gradual ramp up in power through the mid-range then ended with a short winded top end. Overall- an easy to drive power-plant with enough grunt to have fun.

Radio: The included 2.4 GHz Kyosho radio system worked fine for us. Adjustments were simple to make, the stock foam/trigger/grip felt fine, and it never lacked range for us. Balance was good, and the radio was exceptionally light in hand.

Broken Parts: Our tranny gave way before we got to any serious destructive testing. So… at the end of our testing nothing is broken other than a tranny where power goes in but doesn’t come back out.

The stock speedo was quite notchy and loved to go into nuclear reverse instead of brake (typically at the worst possible time).

I’ve driven some vehicles that didn’t like to center very well when trying to drive straight, but the NeXXt was the worst of all time. You didn’t have to hit anything to knock its center off, it simply would change on every pass while blasting up and down the street. Poor centering is a PITA to experienced users, and makes the buggy much harder to drive than it needs to be for noobs.

The NeXXt comes with some cool looking bead lock wheels.

The NeXXt uses a plastic “push on” pinion gear. In this day and age? Yes, seriously.

You can remove one of the front shocks on the NeXXt and its ride height does not change. Yes, the NeXXt is very over-sprung, which is quite the combo with the friction shocks.

We did manage to find one place where the stock tires and friction shocks were a blast to drive- on a prepped baseball diamond. The lack of overall side bite combined with zero rebound or compression damping was actually quite fun on that surface.

The body is made out of hard plastic, not polycarbonate. Our body did not break and held up ok, although the NeXXt never made it to the true torture portion of our testing.

There is more slop in the rear end of the NeXXt than I’ve ever seen on a hobby grade vehicle. Combine all that slop with the paddle type tires and friction shocks and the rear ends skips around like mad, even on glass smooth surfaces.

The NeXXt turned more heads at the track than anything else we’ve ever driven (for better or for the worse).

We liked the quick access battery door on the bottom of the NeXXt. It worked fine for us and allowed fast battery changes. However, it does limit the size of packs you can use in the buggy.

The Kyosho is a PITA while wrenching, and it doesn’t really matter what you are attempting to work on. It takes 6 screws to remove the body, two of which are hidden under one of the top body panels. Then, once you get the body off the driver figure has to be removed requiring two more screws. Also, we nearly had to break the gear cover to remove it.

The NeXXt doesn’t come with a slipper clutch, this is bad news for the lifespan of the drive-train.

Our ambient temps were not very hot (usually around 50-70 F) and our motor temps were always quite low. The hottest motor temp we encountered was just under 100 F.

Best Mod Under $5: For less than $5 I would work on shimming all the play out of the rear end and ditch the stock battery connector.

Best Mod Over $5: There are lots of mods I would recommend over $5. Replacement of the stock speedo, stock servo, stock servo saver, and adding oil shocks are just a few of them.

Workability – 5/10 – It takes 6 screws to remove the body, plus 2 more to remove the driver. The gear cover is very hard to remove and we still haven’t been able to remove one of the rear wheels.

Bash-A-Bility – 6/10 – Our tranny went out fairly early in testing, in fact it went out well before our true torture testing even began.

Fun Factor – 6/10 – There were a few of our testers that had a great fun with the bouncy old school feel of the NeXXt, but most were not happy when having to drive it.

Handling – 7/10 – The NeXXt is not the worst driving vehicle we’ve ever tested, but it was pretty darn close.

Value – 6/10 – The NeXXt sells for $140. An ECX Boost sells for $100 and not only boasts more modern technology, but also vastly outperforms the NeXXt in every way.

Parts Availability – 6/10 – Out of the 4 local hobby shops near us that I checked, none stocked parts for the EZ series Kyosho, and only 1 of them was even willing to try and order them for me.