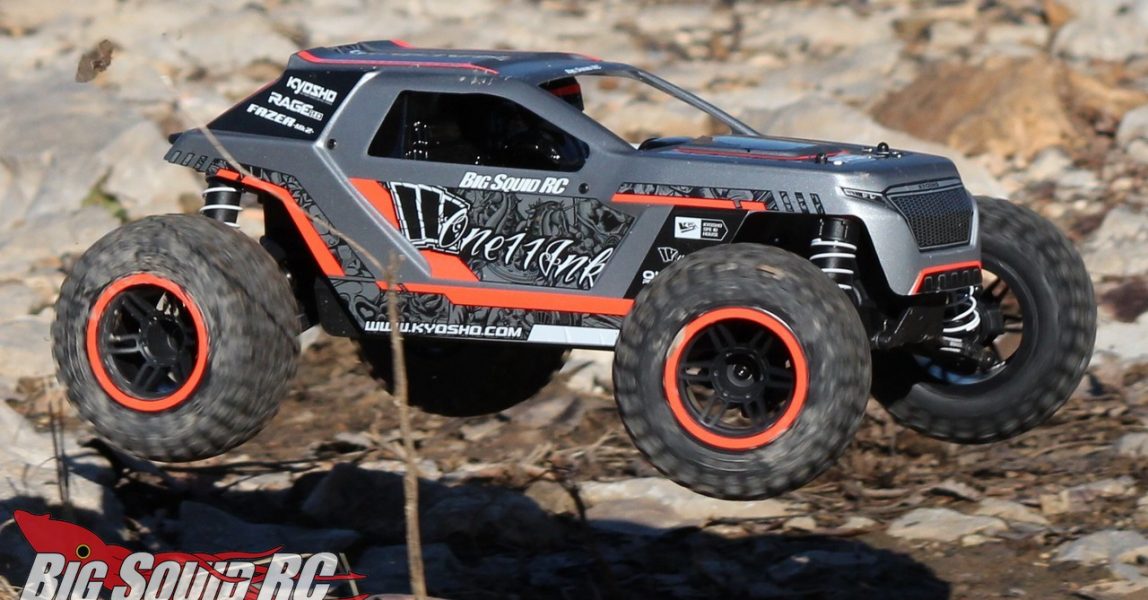 Some rc cars are made to win world championships, others strictly for backyard fun. Kyosho has long been known for building rc vehicles for both the track and cul-de-sac, with their latest bash machine being the Rage 2.0. The original Rage was very well received by us, as well as many others, so for 2019 the Kyosho crew bolted up a number of upgrades. Building upon their previous platform, the 2.0 gets more of a scale look, plus a simplified chassis design. We have been thrashing a Rage 2.0 for several weeks, here is what we found out…

Primary Competition: Ummmmmmm, imagine me scratching my head right now. OK, so it doesn’t look like a moon buggy anymore, it has some scale appearance to it, so maybe a rock racer’ish look? Hey, we dig its original look, it’s just hard to put it into a “category”. However, there are a good number of other 1/10th brushed/RTR/bash-vehicles on the market like the brushed Traxxas Rustler 4×4, ECX makes several, dittos for ARRMA, etc.

What’s Needed To Complete: The Rage 2.0 comes completely pre-built, but you’ll need to supply four AA batteries for the radio, plus a battery and charger for the truck.

Build Quality: After closely checking the gear mesh, various bolts, the wheel nuts, and the shocks, we didn’t find a single fault with the assembly quality on the Kyosho.

Test Drivers: We had our fairly usual crew of Iron “The Pirate” Mikeee, THE RC Kid, Robbie G., Jamie The Rookie, Hawaiian Chris, T-$$$, and yours truly.

Test Venues: Testing with the Rage took place at three of our local parks, plus our local (and extremely muddy) 1/8th scale off-road track.

Set-up Notes: For juice we used four AA MaxAmps cells in the transmitter, as well as one of their 2S 5250mAh LiPo packs to power the truck. Battery charging was impeccably handled by a Hitec RDX1.

Turning: Right up front we have to say that the Rage 2.0 is aimed at the “fun” side of our hobby. As such, it does not come with foam inserts inside its tires. The lack of foams makes the Rage bounce around a bit more than a “race” style buggy, but more so it limits traction in corners. This limiting of corner speed helps make the Rage 2.0 easy to control for first time drivers. No, the Rage 2.0 won’t have the raw corner speed of something like one of their Ultima RB race buggies, but it does make it super easy for nearly anyone to make a nice arc around a corner. At high speed the Rage is another 4wd that is a bit sensitive just off neutral, but otherwise it steered well. In both sweepers and tight corners, we felt that the Rage 2.0 had quite neutral steering, with more than sufficient turn-in at corner entry.

Jumping: We felt that the Rage 2.0 we well mannered over jumps, leaving us very little to complain about. For a brushed RTR, the Rage 2.0 tended to jump fairly level. Trigger inputs were not nearly as gnarly as a brushless truck, thus making it simpler to make mid-air corrections for newer drivers. Landings were generally pleasant at lower heights (think below a foot off the ground), but when landing from larger jumps the suspension would bottom easily. Btw, the Rage 2.0 has tons of clearance, both front and rear, for those steeper take-offs and landings.

Bumps/Whoops: To get the style of steering that they were looking for, Kyosho had to go light on the damping up front. Combine light front damping with no foam in the tires, and well, the Rage 2.0 can get crazy in the whoops. We know the Rage 2.0 was designed for fun, and the light oil/lack-of-foam combo does keep you on your toes in the rough. If you want to pound gnarly whoops WFO all day long, think Kyosho MP10, if you want to hit some big bumps and have the time of your life, think Rage 2.0.

On-Road: We usually only put in a couple of packs “on-road” when testing off-road vehicles, but we put in 4 with the Rage 2.0. While not crazy “brushless” fast, it is certainly capable enough for serious on-road fun. We had a blast exploring (reading jumping the pot holes) in an old beat-up parking lot that we found. It rarely traction rolled at speed while cornering and did a great job of blasting over small piles of broken-up asphalt.

Grass: The Rage 2.0 did a great job of getting around in grass for being powered by a brushed motor. The stock tires worked exceptionally well in grass, as did the truck’s 4wd system. Taller grass did present a challenge, but if you drive in “normal height for a mowed lawn” grass, the Kyosho gets around well enough.

Tires: Yes, about those new tires. We didn’t have a problem with the old tires on the Rage, but the new units look great and are beasts in grass. Yes, we would have loved to have seen them come stock with foam inserts, but they do a decent job of providing traction as they are.

Power: No, the Rage 2.0 doesn’t have the raw power to throw all four tires off the wheels with one flick of the throttle. What it does have is nice controllable RTR type power. Power right off the bottom is smooth and predictable, the mid-range is brief and smooth, and the Rage 2.0 tops out at 25 mph on 2S LiPo. The speedo pumped out plenty of buttery smooth power, perfect for learners, or for those that like precise throttle control. If you are a “first time” driver, the Rage 2.0 has enough power to make you go “Wow!”, but not so much that you end up accidentally tagging a curb at 50 mph on the first squirt.

Radio: OK, so the radio on the Kyosho was loved by one, hated by one, but mostly not noticed by the rest of our test crew. Our test unit worked without issue and had good range.

Broken Parts: We found that the folks over at Kyosho got the plastic mix just about right. It is soft enough to brush off the vast majority of hits, while also being hard enough not to sag/warp or flex too much. You should keep in mind that it doesn’t have crazy brushless speed, so that helps in the durability department as well. In the end, we ended up breaking a shock after a really bad landing from a roof jump.

Ambient temps during most of our testing hovered right around the freezing mark. With that said, we saw very cool motor temps on the Rage 2.0. Of course those will be much higher in hotter summer temps, but during our cold weather testing we could have added a couple more teeth to the pinion for even more speed.

The stock servo gets the job done. While it is not a high-end unit, none of our test drivers complained about it.

There is a small handle on the back of the Rage 2.0 that makes for a great way of packing the truck around. It never got in the way while driving, so we can see new Rage 2.0 owners using the handle to mount other things like a wing, scale accessories, etc.

Best Mod: Ya, Pro-Line is getting a call ASAP for some new shoes to quickly/easily boost corner speed and overall handling.

Time To Bash: B The Rage 2.0 was easy to get up and running. The truck arrives completely pre-built, just charge up a pack, pop in some AA transmitter batteries, and you are ready to get in some backyard bashing.

Workability: C While not difficult to work on, the Rage 2.0 isn’t as open of a layout as we would have liked to have seen when it comes to spinning wrenches.

Car Show Rating: B There is a reason we use a Bunch of different test drivers, but sometimes that can make things harder. For example, the Rage 2.0 was very much a love-it or not-my-cup-of-tea type of truck. We had two test guys (myself included) that loved the trendy new scale-basher style look. Then we had others that wanted to see it more scale than “basher”. At the end of the day when all the votes were counted, the Kyosho was awarded a solid “B”.

Bash-A-Bility: B Very nice! Under normal driving the Rage 2.0 held up like a champ. We liked the plastic blend on the Kyosho, stiff enough to drive nicely, yet soft enough not to break when tapping a curb (even in colder weather).

Fun Factor: B While newer drivers loved the Rage 2.0, our hardened veterans wanted to see the Rage 2.0 in brushless form.

Handling: C The Rage 2.0 was set-up to be easy to drive, not to break your local track’s lap record.

Value: A Our Bash Crew thought the Rage 2.0 was an awesome bang-for-the-buck.

Parts Availability: N/A The Rage 2.0 (and its parts) will be shipping soon, until then we can’t get a good feel for parts support.

BigSquid Rating: B We found the Kyosho Rage 2.0 to be a fantastic backyard bash truck. The 2.0 is durable, as well as easy to drive, yet another high quality release from Kyosho.