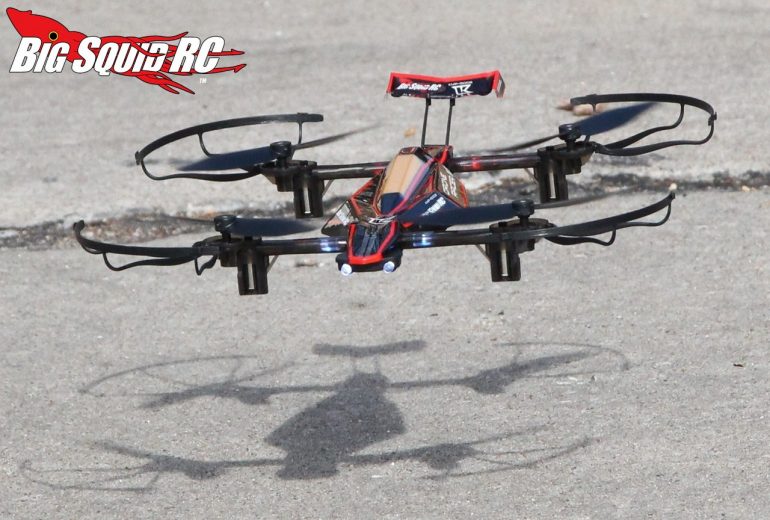 A few months ago Kyosho announced their revolutionary Drone Racer quadcopters. The Drone Racers are not like a “normal” drone, they are controlled by a pistol type radio and only fly a few feet off the ground. We have been testing the Kyosho Zephyr, one of the two Drone Racers released by Kyosho. How easy is it to fly? Is it fun? It is truly revolutionary? Read on to find out…

Primary Competition: Ummmmm…. the drone racer is pretty much in a category all by itself. While the Zephyr certainly is a drone/quadcopter, it isn’t like any other drone on the market thanks to its pistol radio and the way it flies.

What’s Needed To Complete: Almost nothing, the only thing you’ll need to supply is a USB output for the charger and four AA cells for the transmitter.

Set-up Notes: We pretty much ran the Zephyr bone stock while testing it. We used the stock battery and charger, but did grab some Duratrax AA batteries to put in the transmitter. Once you get the Kyosho up and flying, you’ll need to adjust the trims, otherwise it is ready to rock right out of the box. We did do a bit of tuning during our testing which included switching the drone over to the Active setting and playing with different angles on the rotors.

Flying: Straight out of the box with stock settings, the Zephyr had very lackadaisical handling. It didn’t do anything too quickly, nor did it seem to have the ability to make corrections in a rapid manner. Switching the Kyosho to the more advanced flying mode called “Active” made it more responsive, but it still seemed a bit on the slow side. We eventually tried changing the rotor angles (with the supplied parts in the box) and got more performance out of it, but even then it was still a bit on the slow side of things. Just like an rc car, we feel that the Zephyr is well suited to tinkering, making various changes to get it handling the way you want it to. From what we saw, you’ll definitely want to fly the Zephyr indoors, not out.

Power: For a “race” type quad, the Zephyr did not have crazy power. When making speed passes it showed it did have some speed, but not intense power like most FPV race drones. Outside where there was some wind, the Zephyr had a hard time not getting blown backwards. That wasn’t as much as a problem after we angled the rotors more forwards, but it still had a hard time fighting against the wind.

Broken Parts: Needless to say, our bash crew crashed the Kyosho a whole bunch of times. Our test unit proved to be extremely durable and we never did manage to break a part, not even a prop.

In case you are wondering, this is how the Zephyr works with a pistol radio. You turn on the transmitter, then plug in the battery on the drone. Next you unlock the safety feature of the drone by steering full left (and holding) while you then hit the trigger to the go forward position. Lights on the back of the quad will then tell you that the machine is armed and ready to fly. At this point the rotors are not turning. To get them turning and get the drone off the ground you slide the thumb switch upwards. The thumb switch has three positions, off/land, low height (to fly about a foot off the ground), and high height (which is about 3 feet). Once you slide the thumb switch upwards to low or high, the rotors start spinning and the drone starts to hover. At this point you have not yet touched the trigger. When you do hit the trigger, to let’s say full throttle forward, the rotors don’t really spin any faster, but it does cause the front of the drone to dip lower, thus allowing the machine to travel forward. When you move the trigger to the full brake/reverse position, once again, the speed of the rotors doesn’t really change, but the rear of the drone dips lower allowing it to go backwards. When you turn the steering wheel the rotors don’t really change speed either, it simply dips one side of the quad or the other allowing it to turn.

On a “normal” quad, when you start to get in trouble, you simply kill the throttle and it falls immediately out of the sky. On the Kyosho you slide the thumb switch to the bottom “land” position. Landing often times took a couple seconds, which took some getting used to and made for a couple of close calls.

Is the Zephyr the easiest drone to learn to fly with if you are a long time “surface” person? If you’ve never flown any sort of drone before, perhaps. All our of test pilots are seasoned surface hobbyists so they had no problem getting used to the pistol style radio. If you’ve done some flying before, getting used to the pistol will take some time.

The Kyosho uses sensors under the drone to keep it at the predetermined height off the ground. While it generally did a good job of keeping the proper height, it didn’t react quickly to changes in the surface below. For example, when flying over one of the big jumps at the St Louis Dirtburners 8th scale buggy track, the Kyosho would often go a couple feet up the face of the jump before it started to increase its height to match that of the ground. Oh, and no, it will not double jump, it drops right back down after the peak of a jump.

Summary: The Kyosho Zephyr Drone Racer is a very unique take on a racing quad. Its piston style radio makes it easy for surface guys to make the transition and its body has a great look to it. If you are a hardcore surface driver who has never flown a drone before, be sure and give the Drone Racer a look.