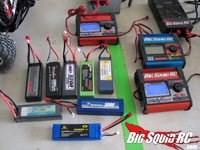 Yes, once again BigSquidRC is host to a Li-po battery comparison. I have not counted them all, but there are probably more than a hundred different companies out there selling Li-po batteries, enough companies that I’m certain we won’t run out of packs to test any time soon. 🙂

After our last shootout, some of our readers had gripes about how we did things. Most of the complaints we received centered on why we didn’t just test one particular capacity of batteries. In our Li-po Shootout 2, every pack is close to being a 5000 mah, which is perhaps the most popular size right now. The second biggest gripe was why we didn’t test all the packs at a higher discharge load, most wanting to see true 30C discharges (150 amps on a 5000 mah pack). Well, we stuck with our 30 amp load for the discharge test this time around, as quite honestly we don’t have the test equipment to do 150 amp load, nor do we think that any useful data would be obtained at such a load other than whether or not the pack caught fire. This is BigSquidRC, for bashers, by bashers (well, with a couple racers thrown in, LOL), and a 30 amp continuous load is much more real world to a basher than 150 amps continuous. The last big gripe we got from the first shootout was why we didn’t test 4S packs intended for 8th scales. We remained with 2S packs for this test because there are a whole lot more 2S packs sold than 4S, and we are trying to test what the majority of consumers will be buying.

Most of the test equipment was the same this time as it was for the first shootout, but there were some small changes here and there. There were enough small changes that you should not directly compare results of this test to the previous shootout. Ambient temps were much different, as were some connectors. We also used a completely different type of truck for the high speed test. So while it would be handy to lop all the packs from the two shootouts together, it should not be done.

With that said, sit back, enjoy, and may the best pack win.

Thank you all very much for supporting our tests! You guys rock! When you go out to order these packs, make sure to tell them you saw it in the Lipo shoot out on Big Squid RC. This way you can make sure you are getting the same pack we tested with.

Here are the 7 different criteria we used to rate each battery pack.

Final Results! Hey, don’t just skip to here! Start at the beginning below!