Top Speed Test
Each pack was “blind tested”, meaning the lone test driver did not know what brand of battery he was driving during each run. We enlisted the help of pro driver Tim Mohr to do the driving for this test. Mohr drives for a company not involved in the test, and has extensive experience doing high speed runs. He kept making passes until he was satisfied he had made the best pass possible on each pack. Between packs, he parked his Slash and allowed the motor cool. His Slash was equipped with stock tires, a Mamba Max speed controller, Castle 36mm 9000 kv motor, and 20/90 gearing. The more powerful packs actually presented a problem in this test, as they were more likely to wheelie the truck over at close to 50 mph, while some of the softer packs were easier to get over 50. 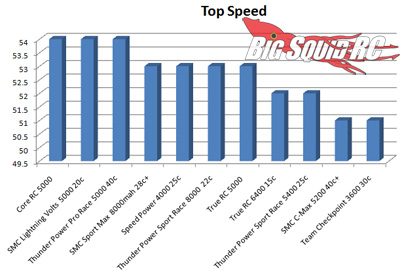 Remember: The tests are all scored by points, lowest to highest. The lower the score the better, like a game of golf.
On to the Voltage Under Load Test! Click HERE.