BigSquidRC 4S Lipo Battery Shootout- Capacity
The more capacity a battery pack has, the longer the run time you will get on the track, that’s why capacity is one of the most important specs of every battery.

Within the industry, official capacity is determined via a 1C discharge. That’s exactly what we did- so on the 4500 mah Turnigy, we used a 4.5 discharge, on the Venom 5000 mah, a 5 amp discharge, etc. It must also be noted that we did not request a certain capacity from the manufactures, we only asked them to send us what they thought would work best overall in the shootout.

Hyperion 720iNet3 chargers were used to charge all packs. All packs were charged at 1C. As soon as a battery was fully charged, it was placed immediately on the West Mountain CBA discharger. Ambient temperature was 73 degrees Fahrenheit. Traxxas connectors were used on all packs.

Capacity is normally the first thing measured during our shootouts, but this time it was one of the last. Our West Mountain CBA discharger arrived late in the testing process, so capacity was checked after all packs had roughly 15 cycles on them. 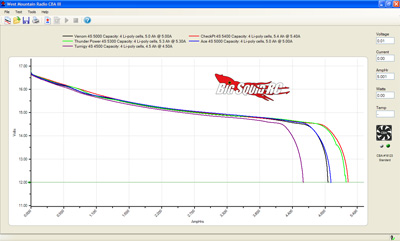