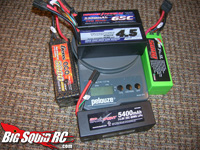 While some may argue that a heavier weight battery is a positive on track (for greater mechanical grip), and that a heavier battery pack eludes to better quality, I’d argue that a lighter pack at the same power output is always better. Lighter packs with the same output give you a better power to weight ratio, resulting in quicker acceleration and shorter stopping distances. I’d also argue that a lighter weight pack gives you the freedom to put additional weight in the spots that would be most beneficial for your handling. While power output is measured in other test categories, we feel that weight is important enough to have it’s own.

As you can see, the Turnigy took the win with the lowest weight, but you can also see that the packs fell right into order, the higher the capacity, the more they weighed. Just 87 grams (3.06 oz) separated the heaviest pack from the lightest, much less than a 20% difference.