The more capacity a battery pack has, the longer the run time you will get on the track, that’s why capacity is one of the most important specs of any battery.

Within the industry official capacity is determined via a 1C discharge. So that’s exactly what we did- on the 5800 mah Turnigy we used a 5.8 amp discharge, on the Speedpack 5200 mah a 5.2 amp discharge, etc. It must also be noted that we specifically asked each manufacture for a 5800 mah battery.

During all of our testing we only used Hyperion 720iNet3 chargers using only 1C charge rates. No more than 10 minutes after a pack was charged it was placed on our a href=”http://www.westmountainradio.com/content.php?page=cba” target=”west mountain”>West Mountain CBA for testing. Only brand new (at the beginning of testing) Traxxas connectors were used (for everything- batteries, chargers, and the CBA). Dr Martys conductive grease was used on all connections. Ambient temp for all bench tests was 68 degrees Fahrenheit. 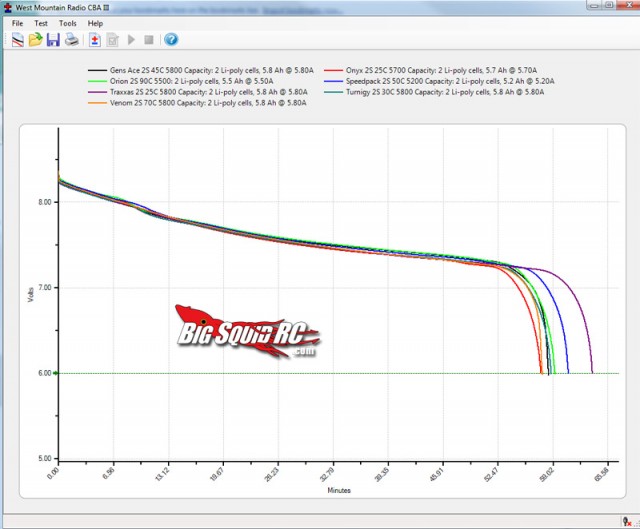 With all that said, here’s how the packs stacked up capacity wise.

So… the winner of our capacity test was the Traxxas 5800 putting out a healthy 6177 mah, well over 400 mah more than any other pack in the shootout. However, the Traxxas put out 377 mah more than stated on its label. Did Traxxas purposely understate the capacity of its battery, or was it quality control issue? Either way, testing nearly 400 mah “off” could be the indication of an issue.

In second place was the Turnigy, coming in 101 mah under its stated capacity, and the Gens Ace rounded out the podium, 145 mah shy of its stated 5800 mah.

Of note, the Orion may have come in 6th based on total capacity, but it came closest to its label, testing a scat 54 mah under its stated 5500 mah capacity.