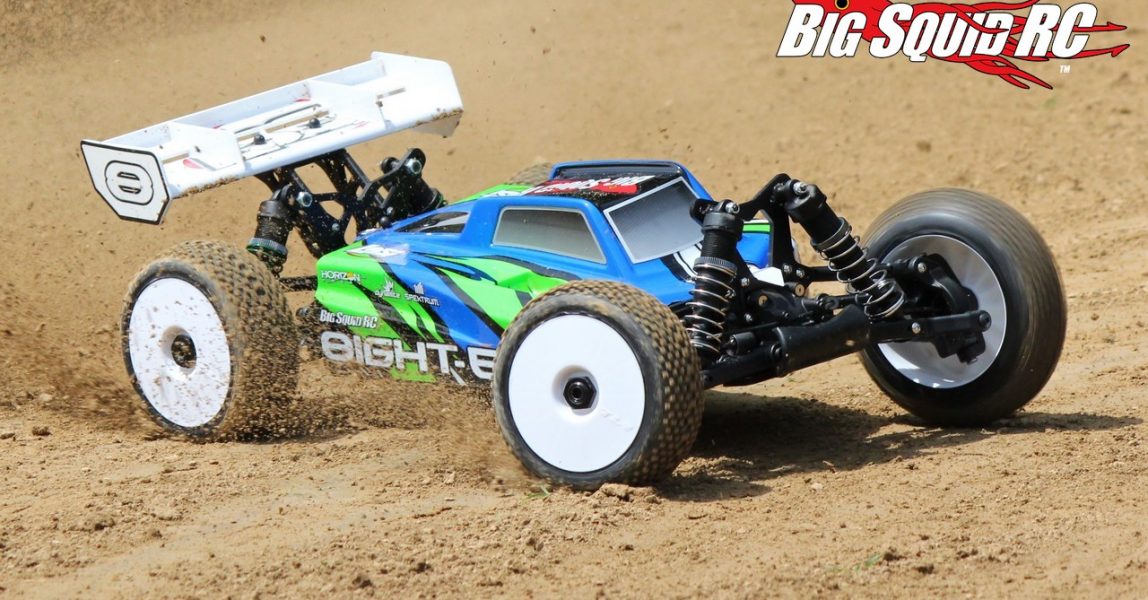 Oh yes, 1/8th scale brushless buggies are gnarly beasts. No matter where we go to bash, there are always nuclear fast 8th scalers running around. One of the leaders in 8th scale is Losi. Their full scoot race rigs are well known for winning national titles and for being some of the best handling machines that money can buy. Over the last few months we’ve been driving the Losi EIGHT-E RTR. As a RTR, it is easy for even new drivers to experience the awe inspiring performance of 1/8th scale, while not costing an arm and a leg. So, how is the Losi? Does it handle good enough to race? Can it leap over tall buildings in a single bound? You know the drill here folks, keep on scrolling down for the entire scoop…

Primary Competition: There is no shortage of competition in the 1/8th scale buggy market. Some prime competitors are the ARRMA Typhon and the Associated RC8.2e RTR.

What’s Needed To Complete: It doesn’t take much to get the Losi up and running. You will need 4S worth of Lithium power for the car, along with a charger for said battery. Oh ya, you’ll also need four AA cells for the DX2E, but other than that, it is ready to rip.

Build Quality: We did find one thing that was out of sorts with our test unit, the front droop. Stock, the arms on the front of the buggy were above bones level. We dropped the arms a bit to increase suspension travel and handling.

Set-up Notes: Other than changing the front droop, we ran our test buggy bone stock. A big Dynamite 4S LiPo pack was used for power, while MaxAmps AA cells took care of the transmitter. For charging, we used a Dynamite Passport Ultra Force Duo.

Turning: The Losi EIGHT buggy platform has a great reputation for steering. It has won hundreds upon hundreds of races, mostly because of how well it turns and how easy it is to drive fast. Our RTR test unit was not up to that level, and for one reason, its front springs. The front springs on our buggy were simply too soft. It was hard to make a proper ride height, but worse still, upon entering a corner, the front end dove too much. This gave the RTR copious amounts of over-steer. Turning at mid corner and exit was excellent, but its soft springs caused the buggy to bite too hard at entry. This made it hard to drive fast in the corners, plus it created traction rolling on high bite surfaces.

Jumping: Another trait the EIGHT is known for is jumping. The Losi did a good job of jumping for us, but it could have been so much better with stiffer shock springs. The soft springs really caused the nose to dig into jump faces, then created heavy bottoming upon landing. On the up side, we will say that the buggy responded incredibly well to mid-air radio corrections.

Bumps/Whoops: The suspension on our buggy was phenomenal at soaking up small bumps going into and exiting a corner. However, with it being on the soft side, that created a lot of bottoming at high speeds or over super rough terrain.

On-Road: With a few adjustments the EIGHT-E RTR could be a stellar performer on-road. Out of the box it tended to traction roll in corners. It did have one big upside, its power system, which was absolutely no joke for going fast on pavement.

Grass: We found grass performance solid on the Losi buggy. The stock tires use fairly small knobbies, but they still did an admirable job in grass. We were able to mow through grass several inches tall with the EIGHT-E RTR, so if your only option for a place to drive is all grass, it can definitely work for you.

Tires: The tires were a solid choice when used on a hard packed off-road track. Their soft compound and small knobbies gave the buggy good traction around a dedicated rc track. On the downside, they wore quickly when driven on-road and didn’t work nearly as well in rock or in large dirt clods.

Power: Do you wanna know the highlight of the buggy? Yup, here it is, power. Out of the box the Losi is an animal, even more so than other brushless RTR rigs. It yanks out of the hole with ferocity, blasts through the mid-range, and is seemingly able to keep revving to the moon. Stock gearing was on the high side with our test unit topped out at 47 mph on just 4S. It certainly packs that brushless “Wow!” factor, and then some.

Radio: A standard issue Spektrum DX2E is provided, which is a solid unit for a RTR. Ergonomics are decent, with it fitting a large variety of hand sizes. We wished it had a foam covered wheel, but liked how we didn’t have any range or glitching issues with it.

Broken Parts: Like most 1/8th scale buggies, the Losi is quite tough. It can take some decent hits, huge jumps, and tagging of numerous pipes without breaking. In the end, we ended up breaking a plastic shock cap and massively taco’ing a shock shaft. Higher-end EIGHT models come with full metal shocks, but that is hard to do at the RTR’s price point.

No, we can’t talk enough about the Losi’s power system. We found it quite waterproof and everyone that pulled trigger on it was seriously impressed for a RTR.

What about that stock servo? It gets the job done, especially on the torque side, but is quite slow. Experienced drivers get used to it quickly and we think it actually helped first time drivers from over-correcting as much as usual.

If you like the looks of a “race” style machine, you’ll really like the Losi. It has an uber cab-forward body, a full-on race style wing, and the exact same style of wheels that are used to win world championships.

Where is the AVC electronic stability control? While most great handling 1/8th buggies don’t benefit as much as smaller 2wd vehicles, we still would have liked to have seen AVC on the EIGHT-E RTR. AVC is great for slippery conditions, which was where we drove the Losi the most.

Best Mod: Yes, you already know what we are going to say here, shock springs! Going to heavier springs is cheap and will make a world of difference in the way the buggy handles.

Time To Bash: B Getting the Losi up and bashing takes very little work. You’ll need to charge up a pack for the buggy, install four AA cells into the transmitter, then it is ready to go big.

Workability: B We found the hardware to be of decent quality on the Losi and it uses an open layout. These two factors make the EIGHT-E RTR very easy to spin wrenches on.

Car Show Rating: B Nope, you aren’t going to find any scale realism on the Losi, it is dedicated to a full-on racer style of look.

Bash-A-Bility: B Our test buggy was really tough. We drove it like patients freshly escaped from the mental hospital and broke very few parts.

Fun Factor: A If you like power, like lots and lots of power, you are going to love the EIGHT-E RTR.

Handling: C Listen, we know the EIGHT-E platform is arguably one of the best handling on the planet. However, the RTR unit came with front springs that were far too soft, thus hurting its handling during our test period.

Value: A For under $500 the Losi is a heck of a buy. You get a premium handling chassis and a gnarly power system, all for an amount that doesn’t completely empty your bank account.

Parts Availability: C We found that spare parts were abundant and easy to find on-line. What holds the buggy back in this category is local hobby shop support. After hitting two local hobby shops we were only able to find a handful of spare parts for it.

BigSquid Rating: B Our bash crew had an absolute blast with the Losi EIGHT-E RTR 1/8th scale buggy. It had amazing power that allowed us to have fun on the track, at the park, or even just doing speed runs.