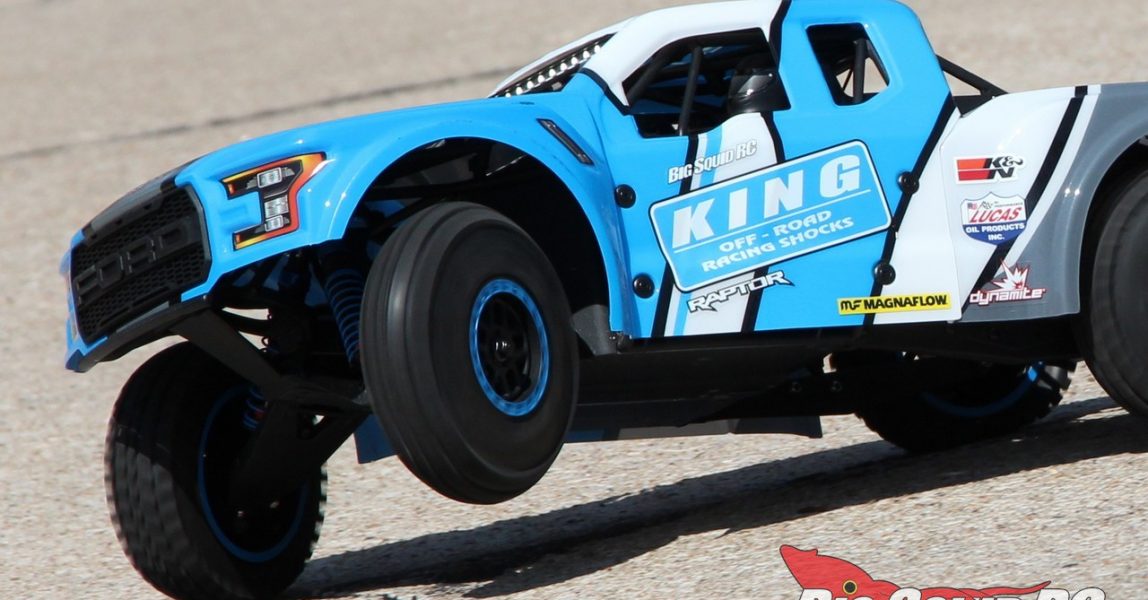 Released just a few weeks ago, the Losi Ford Raptor Baja Rey King Shocks Edition RTR from Horizon Hobby has created quite a stir in the bashing community. The Ford Raptor has one of the most detailed bodies that we’ve seen from Losi, plus it comes on the highly capable Baja Rey platform. We’ve been pushing our test truck to the limit to see exactly how it handles, and to see how much punishment it could take. What are you waiting for? Scroll down for the good stuff!

Review and Pictures By: Iron Mikeee

What’s Needed To Complete: The Losi comes completely pre-assembled so you will only need to supply a battery for the truck, and a battery charger.

Build Quality: The BSRC Bash Crew could find no fault with the build quality of the Losi. All the bolts were tight and not stripped, the gear mesh was good, the shocks were properly filled and not leaking, etc.

Driving: At lower speeds the Ford Raptor drives in a scale manner. The truck is softly sprung and damped, this gives the truck a lot of roll, just like the full sized version. It also has a lot of steering. Modern Losi vehicles are known for loads of steering and the Ford Raptor is no exception. In corners, the front tires nearly always stay glued to the ground. This leaves the rear a bit loose, or when driving on higher bite surfaces, this can lead to traction rolling. BTW, the tires are super soft, feeling closer to a rock crawling tire than a basher compound. These super soft tires help in rock sections, but make the truck drive super “tight” on anything but loose driving conditions. To produce a realistic look when driving, the truck’s suspension is very soft, so it bottoms easily when landing from jumps or when hitting rough sections at speed. Also, when jumping, the Ford Raptor tended to jump “nose down” just like nearly every IFS/solid rear axle vehicle on the market. However, overall- the Ford Raptor gives the driver a great taste of what driving a modern over-powered, over-suspended 1:1 race truck, would actually feel like.

Tires: While the stock tires look awesome and have amazing grip, they are extremely soft for the application. The rubber feels closer to that typically found on a rock crawling tire than a basher truck, and while this yields tons of raw mechanical grip, it also leads to traction rolling and severe tire ballooning.

Power: Out of the box the Losi has loads of brushless power. The truck had a bit of cogging from a dead stop, but once moving it rocketed out of the hole with authority (on just 2S!). Once in the mid-range, it kept on ravaging its tires. Up top, the Ford Raptor seemed to keep on pulling forever, with plenty of over-rev when nose diving over jumps. Needless to say, stock gearing is a bit tall (even on 2S), and while that does have downsides (warmer temps, shorter run-times, etc), it does give the truck some serious yank when you pound the throttle. Yes, the Losi had more than enough power for throwing massive roost, making big jumps, climbing insane hills, etc, and we never drove it on 3S!

Radio: The Spektrum DX2E has long been a solid RTR radio and that remains the case on the Ford Raptor. We had no range or glitching issues, the radio performed without issue.

Broken Parts: Late in testing, while doing a bit of rock racing, we managed to break the center rear driveshaft. Otherwise, during normal bashing, the truck held up fine.

The body on the Baja Rey looks amazing. Scale detailing on the body is well done with plastic accent pieces, and we were big fans of the realistic roll cage and wheel/tire package. The front grill is amazing, as was the King Shocks livery selected for the body.

The stock servo is slow, but has more than enough power to go lock-to-lock with the front tires on carpet. The speed of the servo helps first time drivers, but leaves skilled drivers (and the AVC system) wanting something faster.

Speaking of AVC, the Ford Raptor is “one of those vehicles” that reaps great benefits from cranking up the AVC. On super-slick surfaces we ran the AVC at 100% and it made us look like we were pro drivers! On high-bite surfaces we turned AVC all the way off as the truck’s super soft tires did a great job of keeping it glued to the ground.

Best Mod: The first mod that we would do with the Losi would be to change to harder tires. Some medium compound licensed off-road tires will add to the looks of the truck, while also making the Raptor much easier to drive in corners. Oh and, we take that back. Our first “mod” would be to drop 2 teeth off the pinion to improve run-times and to reduce cogging from a dead stop.

Time To Bash: B To get the Losi up and running you won’t need much, just a battery for the truck and transmitter, plus a battery charger.

Workability: C All the newer “super scale” type trucks tend to be harder to work on (not just Losi, but every brand). It is simply one of the downsides of having such an amazing scale look. While not hard to wrench on, the Losi will take a few extra minutes compared to an old school SCT chassis layout.

Car Show Rating: A We’ve already mentioned how big of fans we are of the Losi Ford Raptor body. The body is one of the best that we’ve ever seen from Losi, and we also really liked the appearance of the wheel/tire package.

Bash-A-Bility: B The Baja Rey platform can take a hit and keep on trucking.

Fun Factor: B With big brushless power and an incredibly sharp look, our Bash Crew had a fantastic time driving it at various parks.

Handling: B The Losi has a lot of steering, as well as a ton of suspension travel to soak up gnarly bumps.

Value: B At just over $400, our Bash Crew felt the Losi was an above average value.

Parts Availability: C We were not able to find any parts at our local hobby shops, but did find them easily on-line.

BigSquid Rating: B The Losi Ford Raptor looks awesome and drives in a realistic manner. It also has big power under the hood and scale detailing galore. We are big fans of the Losi Ford Raptor, our test unit was a blast!