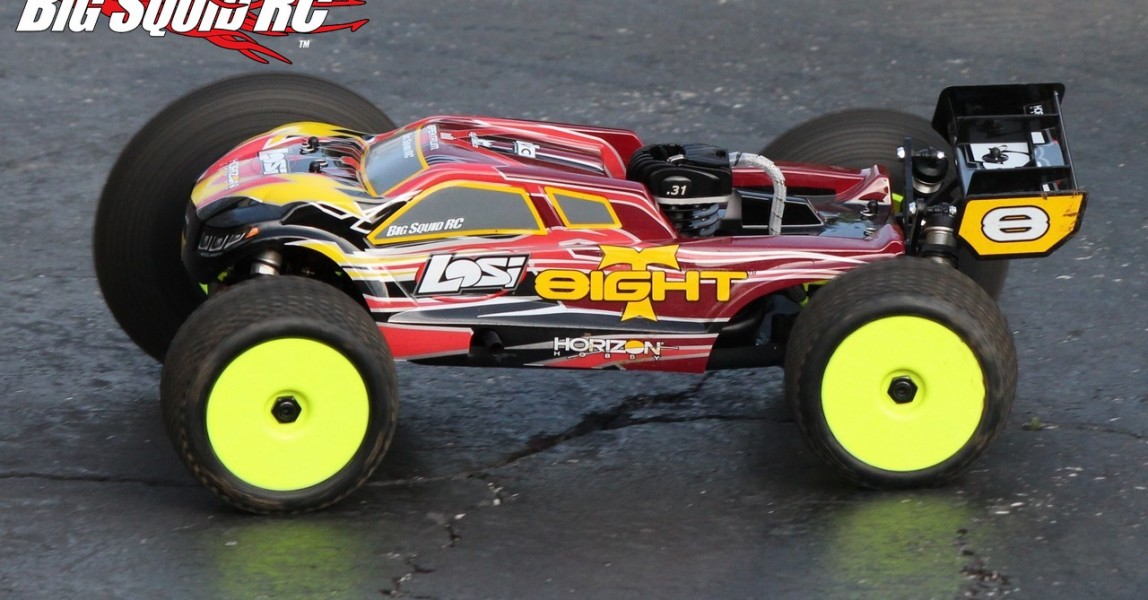 Gasoline powered rc vehicles were supposed to be the next big thing. The HPI Octane seemingly came and went, just as the Losi Monster XXL did. Losi recently released both a buggy and truggy with their Dynamite Gasoline Powered Engine, we’ve been putting the 8IGHT-T truggy through its paces to see how it stacks up. Have they fixed the engine issues? Can you keep the engine running? Does it have a lot of power? Is gas still the future? Read on to find out…

Primary Competition: Ummmmmm…. there are no other gas powered truggies on the market, so there is no “direct competition”.

What’s Needed To Complete: Not a whole lot. You’ll need a battery charger for the LiPo receiver pack, you’ll need a pair of 6 cell Ni-MH packs for the starter box (with Tamiya connectors), and you’ll need some good ole’ gasoline in an approved container.

Build Quality: There is a lot going on under the hood of the Gas 8IGHT-T but we found everything well assembled. The wheel nuts were tight, the shocks felt good, and we didn’t find anything binding out of the box.

Set-up Notes: Bone stock was the order of the day. We popped in a couple of Dynamite stick packs to power the starter box and used a Dynamite Passport Ultra Duo to handle the charging duties. We mixed up a half gallon of 91 octane pump gas with the supplied oil at a 14:1 ratio and were good to go.

Turning: The 8IGHT-T platform is known for its exceptional turning and the gas version is no different. It has plenty of steering all the way through a corner while the rear stays well planted. Overall it steers fairly neutral, however our test unit did steer slightly better to the left than to the right.

Jumping: Oh ya, the Gas 8IGHT-T is one of the best jumpers that money can buy. It launches wonderfully straight off of most every lip, while mid-air corrections are easily made with a tap of the trigger. It does a great job of ignore ruts on jumps faces, while its suspension easily soaks up HUGE landings. Big props to Losi on this one, it is one of the best jumpers we’ve ever tested.

Bumps/Whoops: The fine handling that it exhibits in the air also extends to rough sections. The big truggy tires help it get over large clumps of dirt and its outstanding suspension geometry and stock shock set-up soaks up all sorts of gnarly.

On-Road: Ok, the Gas 8IGHT-T is a beast off-road, but how does it do on pavement? It does very well. Yes, you can traction roll it when turning too quickly at speed, but generally it turned well and just blew through road-joints like they didn’t exist. The tires wear quickly when driven on-road, but it has a lot of corner speed with the stock shoes.

Grass: Yup, you guessed it, the 8IGHT-T is a beast in the grass as well. Once again those big tires and serious torque of the engine made it a blast to drive in grass. The 8IGHT-T even blasted through moderately tall grass like it wasn’t even there. Very impressive.

Tires: The stock Losi tires are at their best on-road or when used on high bite dirt surfaces. However, they weren’t bad in grass or in loam. There are better basher tires out there, but the stockers work quite well on a variety of surfaces.

Power: To find out how the engine functioned, head down below to the “Misc Notes” section, here we will just discuss power output. Once we got the engine dialed in, we found the Gas 8IGHT-T had a LOT of low end power. It absolutely blasted out of the hole with authority. The mid-range seemed powerful and crisp, while the top end was also quite powerful but perhaps a bit short on breathe compared to a high-zoot (read- race type) nitro truggy engine. For pure power, our testers thought it was right on par with a good nitro engine, with the exception that the Losi gas engine had significantly more bottom end. Overall, yes, the Gas 8IGHT-T is fast. That big engine is fast from a dead stop and produces decent top end as well.

Radio: A standard issue Spektrum DX2E gets the job done on the truggy. No, it’s not fancy, but worked well for us.

Broken Parts: We found the Gas 8IGHT-T to be extremely durable. Someone (I won’t name names) “accidentally” ran WFO into one of our wood ramps from the wrong direction. That wreaked all sorts of havoc on the ramp, but the truggy drove away unharmed. We ended up doing four roof jumps with it (from one story high), all four times landing on its wheels, and all four times it drove away unscathed. Later in testing we did manage to blow out a front hub, but it took one of our test drivers (who I will once again not name, but was the same guy as the first time around and his first name rhymes with “him”) tagging a concrete curb WFO in a parking lot to bust it.

The truggy comes with AVC (aka- active vehicle control) but we left it turned down for most of our driving. The big Losi rarely spun out, hence the reason we didn’t really need it. However, it will certainly come in handy later this summer when the local track gets dry and dusty.

So how about that engine? We had problems with our original gas powered Losi, the XXL monster truck, but the truggy was somewhat a different story. To start from the very beginning, the carb on our truggy was too rich for the truck to move out of the box. After leaning out the carb a tad, we were finally able to drive it. During the break in period the truggy would randomly die, and would also die every time we hit the brakes. After some more break-in and after adjusting the idle setting, the engine started to loosen up and run much better. Once the engine was broke in, and after we got the carb dialed in, we found the that gas 8IGHT-T ran excellent. It didn’t die when hitting the brakes, it didn’t die when upside down, heck, it pretty much ran perfectly. We eventually tuned the engine to run at about 210 degrees and it was very happy at that temp. At 210 it had loads of power, started easily, and ran like a top. We ended up being very impressed with how well the engine ran.

We found the 8IGHT-T had great fuel economy. While we didn’t precisely time a run, we do know we had runs over 15 minutes, which is impressive for a fuel powered vehicle. Long runtimes on a tank of fuel is great for bashing (and for racing).

The receiver battery box is on the small size, just barelyyyyy large enough to squeeze the receiver pack into. Oh ya, instead of using body clips it uses bolts, which were a PITA.

Btw, we were HUGE fans of the included starter box, it is the best way of starting up a small rc engine.

Speaking of starting, our test unit easily fired up every time. During the break-in phase it didn’t like to keep running, but at least it easily started, something you can’t say about nitro.

We found that the wire running from the spark plug to the ignition box was rubbing against the rear center driveshaft. That was bad news in the making, so we had to pull the wire up out of the body a couple of inches before each driving session.

The included servos were pretty ho-hum. They weren’t fast, they didn’t have a bunch of torque, but they did get the job done.

Oh ya, we also have to mention the brakes. They were gnarly powerful, strong enough to pull nose wheelies if the traction was available.

So… is gas still the future of rc? While the Losi truggy ran much better than the last two gas vehicles we tested, it still requires more carb tuning than we wanted to see. We wanted it to be like an HPI 5B where you break it out of the box and drive, with zero carb tuning. The Losi gas engine isn’t quite there yet, but they have seemingly made a lot of progress.

Best Mod Under: Buy a temp gun and use it. You never want to see the engine over 260 degrees and we found ours ran great at 210.

Time To Bash: C While it didn’t take long to charge up the batteries, breaking in the engine can eat up some time.

Workability: B The Losi had a standard truggy layout with everything out in the open and easy to work on.

Car Show Rating: B Here is where our testers were quite divided. Some loved its modern “racer style” look with bright yellow dish wheels, cab forward body, and sharp graphics. However, other testers hated it because it is absolutely as far away from a scale look as you can get. Overall, it was decent looking, although it could have scored higher had it come with a more scale appropriate body and wheels/tires.

Bash-A-Bility: B We found the Gas 8IGHT-T to be exceptionally tough. It took some insane hits and drove away without breaking.

Fun Factor: B Yes, our testers had a lot of fun with the Losi. Its handling is top notch, it has loads of torque on tap, and it can be blasted through some awfully gnarly terrain at high speed.

Handling: A Kudos to Losi on how the truggy handles. From jumping, to turning, to driving through blown-out rough areas, the Gas 8IGHT-T handles incredibly well.

Value: C Here we go again, four different testers with four different ideas on how we should score the value category. On one hand it does come with a sticker price of $879, on the other, it is a great overall vehicle that comes with two of the latest and greatest technologies in rc (AVC and a gas engine) as well as a starter box. At the end of the day we settled on a “C” because $879 is a fairly high price for the basher crowd. Had it been in the $699 range it would have scored much better in this category.

Parts Availability: C While there are quite a few hobby shops out there that stock Losi parts, you won’t find parts for the 8IGHT-T on every shelf.

BigSquid Rating: B- Overall, we found the Losi Gas 8IGHT-T to be a great bash machine. It has top-of-the-line handling and its engine worked much better than the Losi XXL MT that we previously tested. If you are the type that likes to be the first guy at the track with new technology, or if you simply want a solid fuel powered basher, we found that the 8IGHT-T would be a good choice.