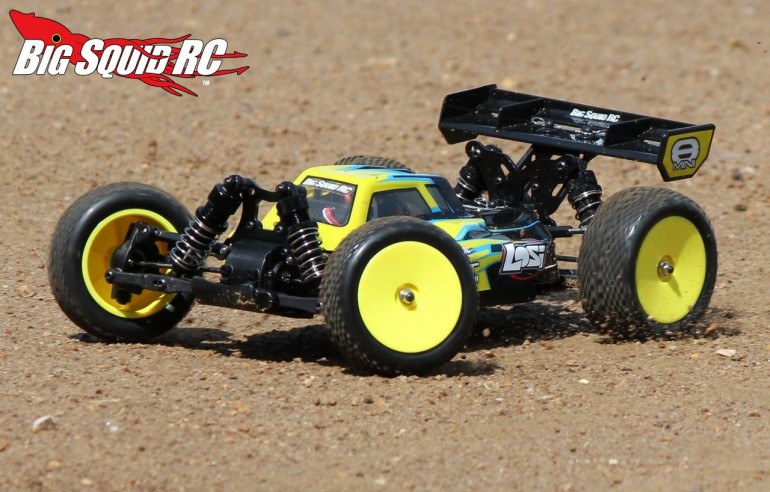 The Losi Mini 8IGHT buggy from Horizon Hobby has been a fast and furious little basher since its initial release. Its latest version features AVC electronic stability control and we have been bashing the daylights out of one to see how gnarly it is. In fact, we took the 1/14th Losi with us on numerous roadtrips that spanned 4 states to test it out in a wide variety of conditions. How does the latest Mini 8IGHT stack up? Read on to find out…

Review By: Your Lovable Cub Reporter
Pics By: T-Money

Primary Competition: Other small scale brushless buggies like the Associated RC18B2 brushless and the Dromida BX4.18BL.

Build Quality: The assembly quality on our test unit all looked good except for the gear mesh which was a bit on the loose side.

Test Venues: Hey, this was our “Road Trip Review” vehicle so we got a LOT of drive time in. We bashed it at the RC Outlaw track (and the surrounding park) in Collinsville Illinois, at St Louis Dirtburners in Missouri, at Arnold City park in Missouri, at a skate park in Fenton Missouri, at a welcoming center in the southwest corner of Iowa, at a couple of rest stops in Nebraska, and at the parking lot of the Embassy Suites Hotel at the HobbyTown USA National Convention in Lincoln Nebraska.

Set-up Notes: Our Mini 8IGHT was left unaltered and bashed just as it came out of the box. We ran the stock battery most of the time, but did pop in a 2S LiPo for some comparison testing. We mostly used a Hitec X1 Pro for charging, but actually used the included wall charger a few times while road tripping. NOTE: The Mini 8IGHT does NOT have a LiPO cut-off, so it is not recommended that you use a LiPO by Horizon Hobby.

Turning: The Mini 8IGHT has long been known for its handling prowess and its latest edition is no exception. The Mini 8IGHT rails on sweepers and can literally turn on a dime in tight 180s. On our test unit the droop screws were set to somewhat limited front downtravel, this affected on-power steering when pounding the gas coming out of corners, but otherwise it is arguably the best turning “mini” on the market.

Jumping: The little Losi generally jumped flat, without its nose wanting to drop or to fly too high. Its suspension was set about right for 3 foot high landings and it had good “pop” off of jump faces.

Bumps/Whoops: For its size the Mini 8IGHT did a great job in the rough. No, you can’t pound through dirt clods like you could with a 10th or 8th scaler, but compared to vehicles its size it showed amazing speed over choppy ground. The stocks were damped about right and its tires are a good size for a Mini.

On-Road: On the front of the box the Mini 8IGHT is called a “Head Turner & Pavement Burner”. Yes, it handled incredibly well on pavement, but the soft low-end of its powerplant kept it from truly being a “Pavement Burner”. Because of its low center of gravity it rarely traction rolled and its suspension was more than ample to soak up road joints without a whimper.

Grass: The stock battery really held the buggy back when driven in grass. The Mini 8IGHT had a hard time getting going from a dead stop, more due to its soft low-end power than its tires or ride height. If you plan on always running it on a LiPo, it can get around ok in short grass, otherwise look to its bigger brother the Mini 8IGHT-T.

Tires: The stockers did an admirable job on pavement as they did on hard packed dirt, however they weren’t well suited to loam or grass.

Power: The stock brushless system has a ton of power, unfortunately that power isn’t unleashed with the included NiMH pack. That can be a great thing for noobs learning to drive for the first time, but otherwise you’ll want to ditch the stock pack ASAP to get some real thrills out of the power system. Yes, on a good LiPo the Mini 8IGHT rips hard, but stock it is incredibly soft from a dead stop, has a slow build in the mid-range, and tops out fairly early at 27 mph.

Radio: Is it just me or does every Horizon vehicle ship with a DX2E now days? Not that that is a such a bad thing, the DX2E has enough range for “normal” bashing and we never experienced a glitch. Its one major downside is its hard steering wheel that doesn’t come with foam.

Broken Parts: Our test buggy took a ton of abuse with very little in the way of breakage. During 4 states worth of bashing we managed to snap a couple of screws in the rear wing, strip a spur, and to break a front hub carrier. That might sound like a lot but was actually not bad for the rough life that our test unit had to endure.

We never noticed the stock servo and that is a good thing. Not noticing it means that it had enough power and speed to get the job done.

We reviewed an earlier model of the Mini 8IGHT (back in 2012) and we didn’t remember popping off tie rods as much as we did on the current model.

The Mini 8IGHT cogs quite a bit from a dead stop with the stock battery. Most of that cogging disappears when driven on a LiPo.

On most 4wd vehicles we don’t crank up the AVC stability control very much but we found it came in extra handy on the Mini 8IGHT. Because of its relatively small size, the AVC worked really well at keeping the Mini 8IGHT straight and true when we drove it in bombed out conditions. It also really helped the buggy come out of slippery corners without spinning out.

Like mentioned earlier, we took the Mini 8IGHT on a bunch of different road trips, including the 8 hour jaunt to Lincoln Nebraska for HTCON 2015. The Losi turned out to be a great vehicle for such use. It rarely broke, it had decent speed, and it didn’t take up much room in our luggage.

Once done road tripping, we got down to some serious bashing back at home. Normally a trip to a skate park is the kiss of death to most vehicles, but the Mini 8IGHT lived through several packs with just minor issues. If a buggy can live at a skate park, your backyard should be no problem.

Best Cheap Mod: Loosen up those front droop screw to the let the front a-arms have more downtravel. This helps the buggy over rough ground and with its on-power steering.

Best Mod Over $5: Hands down-> a high quality LiPo battery.

Time To Bash: B It doesn’t take long to get the Mini 8IGHT going. The receiver is pre-bound to the transmitter, the AVC has been pre-calibrated, the only time consuming task is to get the battery charged up.

Workability: B For some of you older hobbyists, the 14th scale size might make it harder for you to work on (to see the smaller screws & parts), but generally the Mini 8IGHT was a breeze to wrench on.

Car Show Rating: C The Mini 8IGHT is all about racer looks with zero concern towards scale realism. If you dig cab forward and yellow wheels, you’ll love the Losi, but if you are like our Bash Crew and are looking for scale appearance, it falls short.

Bash-A-Bility: B The Mini 8IGHT took a lot of hard hits with very little breakage.

Fun Factor: B The stock NiMH seriously limits its fun factor out of the box. Thankfully a 3S LiPo turns it into a beast.

Handling: A The Losi is the best handling small buggy on the market. It turns the best, it jumps the best, and its electronic stability control helps keep it straight and true over rough ground.

Value: B The Losi has a lot to offer but its $269 price point isn’t cheap for a mini.

Parts Availability: C The Mini 8IGHT has been on the market for around three years now so there are plenty of parts out there. However, most of those parts are not on dealer shelves, they are just available on-line.

BigSquid Rating: B The Losi Mini 8IGHT is a fantastic little basher and the addition of AVC just makes it even better. We can highly recommend it to you, pick one up and have a blast with it.