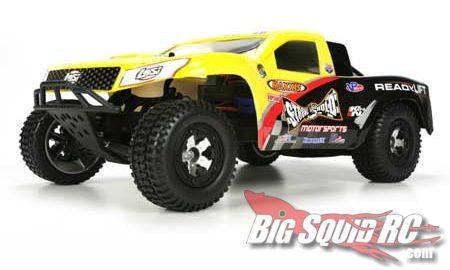 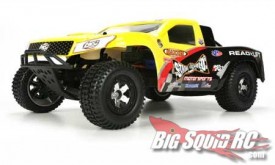 Another set of team colors joins Losi‘s stable of Mini SCTs.  The Stronghold Motorsports Team, (who, a few montsh ago, signed on Jeremy McGrath for driving duties next season) now has a minified version of their LOORS, Rob Naughton piloted, Pro-2 truck thanks to the gang at Losi.  As with the other Mini SCTs, the Stronghold edition is RTR with a 2.4 GHz Spektrum DSM radio system and water-resistant Losi Xcelorin brushless ESC with 4500Kv motor.  The truck also includes a 7.2v, 1100 MAh NiMH battery that comes prewired with Losi’s high-current EC2 connector.

A separate body set is also available if you already own a Mini SCT in another livery.  It’s also likely that in the near future this new Mini SCT will also become available in a Bind-N-Drive version for a lower cost.

MSRP for the RTR is $299.99 and it should be available late next month.  Check out the Losi web site for more info.