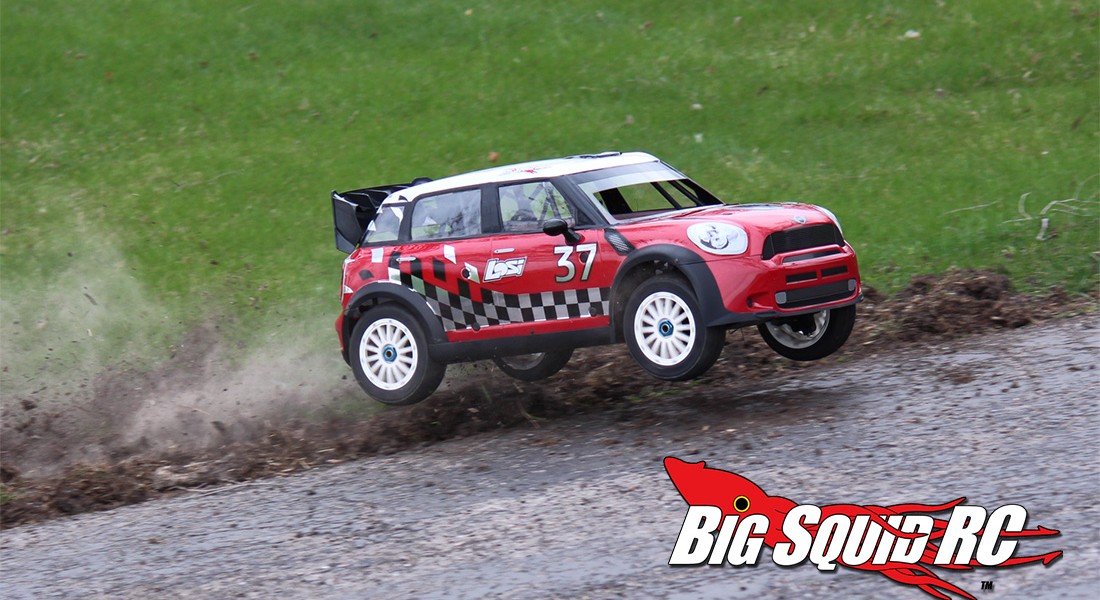 In the go big or go home category, the Losi Mini WRC 1/5th Scale RTR from Horizon Hobby certainly goes big! When we first heard that Losi was doing another 1/5th scale vehicle, we were glad to see they were going to do something a little different. The Losi 5IVE-T set the bar pretty high. While the rally car scene has been up and down over the last few years, a large scale rally car had the potential to be some serious fun. So does the Losi Mini WRC live up to the high standards the 5IVE-T has set? Read on..

Review By: Brian
Photography By: Brian

What’s Needed To Complete: You’ll need some 87 octane (or higher) gasoline mixed with the correct amount of oil, charge the receiver battery, and you will be good to go.

Build Quality: Out of the box, everything was in pretty good shape. We didn’t find anything binding, nothing was leaking,

Test Drivers: Bill A.K.A Wrench, and yours truly Editor in Chief.

Set-up Notes: We ran the Mini completely stock with some 87 octane fuel we mixed up. We want to mention the manual is not correct in how to remove the body. The manual says there are 6 body pins to remove, and you are good to go. The truth is there are 4 body pins to remove AND 4 large hex bolts from the bottom of the vehicle. It’s not easy to get the pins in and out due to the size and weight of the vehicle since they are hidden under the body. Note: We did not put the bolts back in. While the bolts would secure the roll cage to the chassis a little more, it’s not something we had patience for, and have not had any issues with them out.

Turning: The big 1/5th scale steering servo aims this beast in any direction you want to go. The Mini WRC does come with AVC built in, and if you find yourself in a situation where you need to really keep the vehicle under control, the AVC works great letting you dial in the amount of help if provides. That being said, most times we kept the AVC fully off. The 1/5 scale vehicle handles great, and with the physics of such a beast sliding around, we found most enjoyment breaking the tires loose and getting sideways in the turns.

Jumping: The Losi 1/5 Mini WRC jumps amazingly well. We were all surprised by how balanced off all sorts of jumps it was. While it’s too heavy to be making big corrections in the air, it’s ok, because you rarely needed to correct them much. From small dirt, to off road and eventually the BIG AIR at the skate park, we were very impressed. At the bottom of the review, that fence is about 10 feet tall and we cleared it with 5 feet to spare, landed flat to grass, then drove away with no issues! The WRC can bash with the best of them!

Bumps/Whoops: Because of it’s size, bumps and whoops were no problem from the Mini WRC. It’s suspension soaked up anything we threw at it.

On-Road: While the Losi WRC is a blast off road, on road it shines equally as well. We didn’t experience any traction rolls as the weight of the car would normally break the tires free on the tight turns allowing the rear end to slide around. Depending on the level of AVC you had dialed, you could be glued to the road with slightly larger turns, or breaking the tires loose with some tighter action.

Grass: As you might expect, the Losi 1/5 Mini WRC eats grass for lunch. While high speeds were no problem, if you were not using AVC, the high traction could cause you to roll the car if you weren’t careful.

Power: The 29CC engine had more than enough power to bring a smile too our face. While there was enough to be fast on all types of terrain, it surprised us by making one of our huge standard durability jumps at the skate park without a problem. During testing, our top speed was 38 mph, but we are sure with a little more tuning you could hit 40 mph.

Radio: The Spektrum DX2E was the pack in radio. It was good enough as a stock radio that allowed for adjusting the amount of AVC used.

Broken Parts: So amazingly enough we have had no broken parts. Don’t think this wasn’t from a lack of trying. We had plenty of direct curb shots as well as 20 foot high jumps with landings to grass and pavement. The only major damage was to the body. (More on that in the misc notes).

A couple of things about the Losi 1/5 Mini WRC. After just tank of fuel, during the break in process, we noticed the paint on the body started to spider and crack. We knew this wasn’t a good sign, as the abuse the body was going to take was only going to get worse. After just a few days of testing, the paint on the body is trashed. Not only has it come off in expected places like wheel wells, but in many not expected places look the front hood, sides and rear. When you have $1800 invested, you don’t want to find yourself looking at $188 bodies for painting and replacement. We have talked to Horizon, and have been told that if you happen to get a body that for some reason has excessive paint wear after a day or so, to give them a call. Maybe there was a batch that didn’t get backed properly or something, and you may be able to get it replaced.

True to it’s form, the hi-performance 29cc motor starts every time without issue. Even the first time it started, the manual said it might take 2-3 pulls, and sure enough on the third pull we were running! It’s one of the best things about running large scale, besides sounding awesome, they start easy! We remember hearing rumors of an auto-start feature, sadly this did not make the final product.

Before you run it for a while, the body looks great! We would of liked to have seen a slightly smaller front windshield cut out, it’s also a little strange that there is no cut-out for the exhaust, it just blows right into a side window.

It was a little strange that the manual had step one – removing the body wrong. The hidden body pins are a nice touch to keep the scale look though.

Warning: When you are first breaking in the vehicle, the disc brakes probably have a coating on them from the factory. You will have little to no brakes until you wear the stuff off. Do NOT go driving full throttle and think you are going to be able to stop till at least half way through fuel tank two. Seriously, full braking was just an ignored suggestion, till tank 3, don’t hit anything.

While the radio tray is waterproof, we don’t believe the servo’s are.

Best Mod under $5: Not sure if it would of saved the paint, but a couple of thick clear coats of paint on the inside of the body may of helped.

Time To Bash: C Break in isn’t quick, and watch out for those brakes for a couple of tanks.

Workability: B Everything is pretty easy to work on once you get the body off, but that can be a bit of a challenge.

Car Show Rating: B+ The Losi Mini WRC looks goodout of the box. It’s got a great scale look, it’s huge, and will turn many heads anywhere you go. It’s a bummer our paint didn’t last. We’d love to see some other bodies besides a Mini for it.

Bash-A-Bility: A- Besides the body, the vehicle took a serious beating! We didn’t break a single part, and we were jumping sky high, and crashing into all sorts of immovable objects.

Fun Factor: A The WRC is a blast to drive. If you turn off AVC and get sideways in the loose stuff, it will be hard to wipe the smile from your face. Being able to get big air without worrying about breaking something was a relief.

Handling: B With the adjustable AVC, you can dial it in to about perfect for any driving style. It takes the turns great, gets loose when you want it to, and tracks like an arrow in the rough stuff.

Value: B- This is a tough one. $1799 was more than the first two real full size cars I owned. Adam the intern has had about 5 cars now, and I don’t believe any of them cost that much. $1799 is a tough number to swallow. If it isn’t going to cause you to miss a house payment, or default on a loan or something, it’s worth the price of admission. It’s so big, so durable (except the paint) and such a fun vehicle to drive, if you can save the cash, you won’t be disappointed.

Parts Availability: C While many of the parts are interchangeable with the 5IVE-T, you probably aren’t going to find many on hobby shop shelves. The Horizon Hobby webpage does have most of the parts in stock.

BigSquid Rating: B Overall, we really liked the Losi 1/5 Mini WRC from Horizon Hobby. We were surprised by how good it jumps, and how durable it was. It has plenty of power on tap reaching a very acceptable top speed. If you can afford to get into the large scale game, or have a rich aunt that owes you a birthday gift, we can easily say you will be pleased with your purchase.