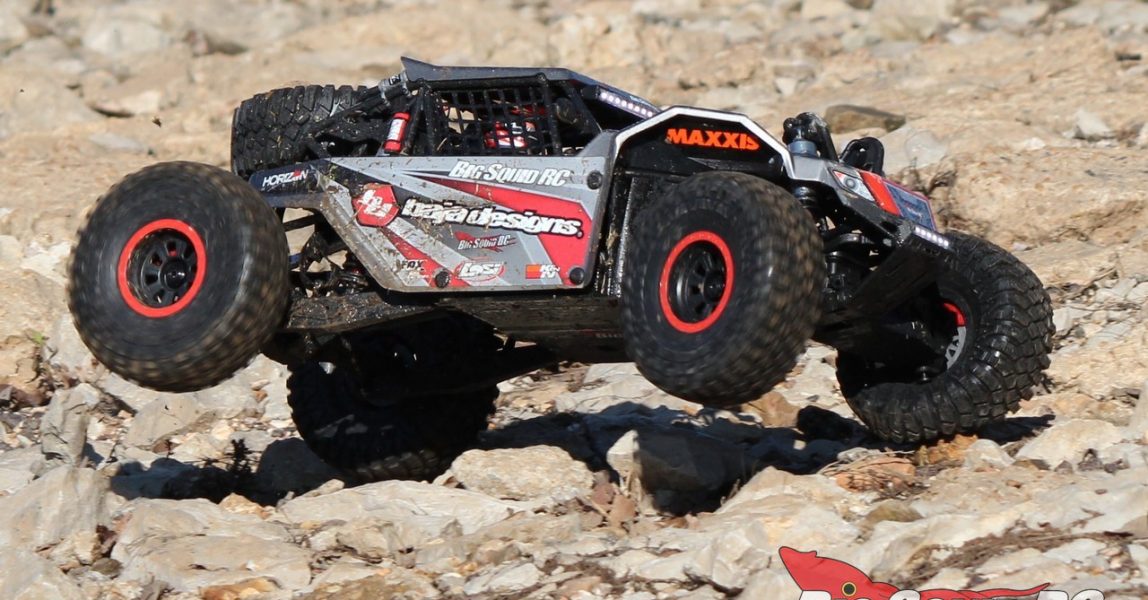 Coming soon to a hobby shop near you is the Losi Super Rock Rey from Horizon Hobby. A giant 1/6th scaled off-road beast, the Super Rock Rey is one of the most scale realistic bash rigs that Losi has ever released to the market. Plus, it was designed to tackle the gnarliest of off-road terrain. We’ve been wreaking havoc all across America with the Super Rock Rey to learn as much as we could about it. Just how does it stack up? You know the drill…

What’s Needed To Complete: Not a whole lot. You will need a battery (or batteries) for the truck, and a battery charger.

Build Quality: After having a half dozen of our crew members look the rig over, everything was tight and well assembled. The gear mesh was good, the shocks were properly filled and not leaking, etc.

Test Venues: How many different venues did we get in some testing at? We got some in at Badlands off-road park in Indiana, pulled trigger with it at the Rocky Mountain Hobby Show in Denver Colorado, plus we drove it at all our regular local venues, including an 8th scale off-road track.

Set-up Notes: Box stock my friends, that’s how we test cars and trucks around here. Power was provided by a pair of high current Dynamite 3S 5000mAh LiPos wired in series for 6S. We did make one run on 8S and used a Dynamite Passport Ultra Force Duo to handle all the charging duties.

Turning: We found that the SRR had a lot of side bite in corners. On higher grip surfaces it did traction roll from time to time, on looser stuff like gravel and dirt clods the SRR did a great job of finding traction where very little existed. Typically, going into a corner, the front tires would stick like glue and would stay planted through the apex. After the apex the steering could either be very good, or if you punched the throttle hard, the front tires would straighten-up from the all that power hitting the front tires. The servo saver is a bit weak for the big mass of the SRR’s front tires and gnarly power system, but not so weak that it totally ruins the steering like on some trucks. You really only notice the servo saver when tagging WFO after a corner apex, or when attempting to turn at high speeds. One more note on the steering, the SRR has a fairly wide turning radius, but not as wide as some in the large scale class.

Jumping: Like most vehicles running an independent front suspension along with a solid rear axle, the SRR likes to jump nose low. Now, if you are running the SRR on 8S, it is quite easy to pull the nose up while airborne, but on 6S you may need to alter your jumping style to suit the realistic style of the SRR. When jumping on 6S we would typically gather the speed needed to make the jump, then then go to neutral just before the jump face. At the bottom of the face we would pin it WFO and that would typically allow the SRR to fly nice and flat. Otherwise, the Super Rock Rey did a great job of ignoring rain ruts in jump faces, and it could land from fairly decent heights without bottoming too hard.

Bumps/Whoops: Pounding through whoop-de-do sections was where we really had fun with the Losi. Long sections of sand wash-boards were taken WFO like a boss, and other obstacles like dirt clods and smaller rocks were largely ignored. The large size of the SRR allows it to go places and over things that smaller vehicles simply have no hope of clearing. And while the nose will drop instantly in the whoops if you let off the gas, if you keep it pinned it just loves to gobble up all sorts of ugly terrain, and do so in a scale manner.

On-Road: So while some off-road bash trucks work really well on pavement, the SRR was fun, but tended to traction roll more than you would want for serious on-road driving. The suspension on the SRR is set-up for blasting around a rock racing course, not carving lines under an XRay T4. Of course you can have a lot of fun with it doing speed runs and such, and don’t forget, it does come with actual working limiting straps, and and few choice for shock mounting. You should be able to dial in the suspension with a little work if you find yourself less in the rough stuff.

Grass: Ummmmmmmmmm, ya, the SRR was bad @ss in grass! Once again its huge size and gnarly power system basically allow it to ignore normal height grass. The tires work really well in grass too. If backyard bashing is your favorite, the SRR will absolutely impress.

Tires: Ya, about those tires, they are good, in fact a bit too good! Forward bite on the tires is very good on loose surfaces, but they give even more grip for side bite. Those aggressive lugs and deep tread really do a fantastic job on pretty much every surface but pavement where all that glorious side-bite that comes in so handy off-road, makes it tend to traction roll while turning at speed on high bite surfaces. Also, the tires look the part and are fully licensed by Maxxis.

Power: On 6S we found that the Losi had plenty of power for normal bashing. It had a nice “hit” of low-end grunt right off the bottom, then it just blows through a stout mid-range. Up top on 6S, the Losi runs out of gearing way before it does power, with more than enough raw wattage for making most “normal” jumps, etc. Running on 8S does wake up the beast even more, with more over-rev up top and even more power through the low-end and mid-range. Stock it felt stout with plenty of power for our bashing needs, but the truly insane can easily install more rip if needed.

Radio: The included Spektrum DX2E Active worked fine for us. Some of our testers liked the ergonomics, while others complained about the wheel and other small things. The range on the Spektrum was more than we ever needed during testing and we experienced no glitching of any type.

Broken Parts: Early in testing we snapped a front hub carrier and lower servo saver arm. Later in testing our test rig lost a bolt in a front hub. Most of our testing took place with temps below 40 degrees Fahrenheit, so it was really hard for us to judge just how tough the SRR was. Also, as our test unit was a very early pre-production unit, we know that early test units are never as tough as the vehicles that actually make it to hobby shops. In the end, our SRR endured numerous large crashes without breakage, then at other times we would barely tap something and a part would snap.

There are a bunch of LED lights on the SRR and they look very trick. The lights are a nice touch, but we would liked to have seen more protection for the LEDs mounted on the front bumper.

While some independent front/solid axle rear vehicles comes with one or more diffs locked, the were left open on the SRR. Open diffs make the Super Rock Rey much easier to drive, but do hold it back when in ultra-tough rock sections, mud, deep sand, etc.

While we did not do a lot of running on 8S, it is good to see the SRR being capable of higher cell counts.

Best Mod: And that would be to stiffen up the servo saver. We ran ours all the way tight, but that still wasn’t quite enough for crisp steering at speed.

Time To Bash: B It took us very little time to get the Super Rock Rey up and running. Charge up a battery for the truck, pop 4 AAs into the transmitter, then you are ready to dig some small trenches in your backyard.

Workability: C+ So… realistic vehicles tend to be harder to work on than a standard layout, the SRR is no different. While Losi went to great lengths to help make the truck easy to work on, all that scale realism does come at a price.

Car Show Rating: A Our bash crew loved the looks of the Super Rock Rey. There are scale details virtually everywhere on the rig, but better still, it just looks like a tough bashing machine.

Bash-A-Bility: B While our local weather didn’t do our test rig any favors, and our rig was a very early pre-production unit, we had a few parts break unexpectedly easy. However, at other times, it took some incredibly hard landings and crashes without an issue.

Fun Factor: A Yes party people, the SRR is an absolute blast to drive. Why is that? Because it is a beast! The Super Rock Rey ignores obstacles that smaller vehicles have no way of getting over, plus it is a blast to rip around at speed.

Handling: B Off-road the Super Rock Rey is ready for nearly anything, on-road it tends to tip in corners.

Value: B With all those scale details, plus the high-tech AVC electronic stability control, plus all that power, we feel that makes the Super Rock Rey a solid value at its price point.

Parts Availability: N/A While the Super Rock Rey does share some parts with the Super Baja Rey, many of the parts are all new and are not shipping yet.

BigSquid Rating: B Big and burly, the Losi Super Rock Rey has the size to get up and over large obstacles, all the while sporting a head-turning off-road look.