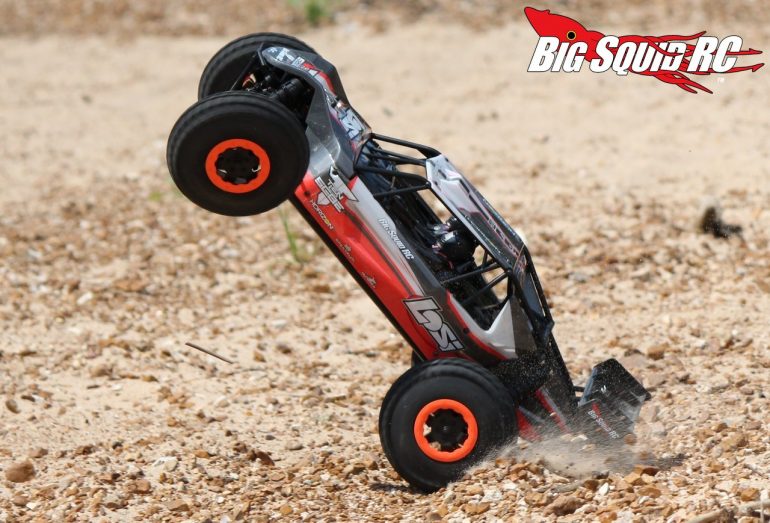 In stores now is the Losi TEN-SCBE RTR Buggy With AVC from Horizon Hobby. The SCBE combines nifty scale looks with the DNA of the world renown TEN-SCTE short course truck. Of course scale buggy looks are all the rage, and the SCTE was one of the very rare vehicles that could dominate the ROAR nats just as easily as a local bash spot, therefore the SCBE has all the making of an epic off-road machine. We’ve been driving (read- abusing) an SCBE for a couple months now to find out just how it stacks up. Does it have high-end handling? Does it have enough power to impress a seasoned veteran? Is it worth cutting the check for? Read on to find out…

Primary Competition: Ummmm… there aren’t a whole lot of 4wd 1/10th short course buggies on the market. Its closest competition would be 1/10th 4wd short course trucks like the Traxxas Slash 4×4, the Losi SCTE, and the Associated ProSC 4×4.

What’s Needed To Complete: To get the SCBE up and running doesn’t take much. Grab a 2 or 3S LiPo plus a charger and you are ready to jam.

Build Quality: To determine build quality we grabbed some BSRC Bash Crew members and handed the SCBE around the table. Each member took a close look to see if they can find any faults with the factory assembly of the buggy. We found all the screws were tight but not stripped and the shocks seemed well assembled. The only fault we could find was the pinion/spur mesh was slightly on the loose side.

Test Venues: We got in a lot of driving time with the SCBE. Our test venues included the ST Louis Dirtburners 8th scale outdoor track, Suson Park in St Louis, and a big ole Costco Parking Lot.

Set-up Notes: We ran the SCBE bone stock. For power we used a Dynamite 3S 4000mAh and a MaxAmps 2S 6500mAh LiPo battery. Battery charging duty was handled by a Hitec X1 Pro.

Turning: The Losi SCTE short course truck has legendary turning. The SCBE is no different. The SCBE is simply fantastic in a wide variety of corners. It can pivot around a sharp 180 nearly as well as a 2wd buggy, while it absolutely rails high speed sweepers. And if doesn’t matter if it is high bite pavement or a slippery/dusty hard packed off-road track, the geometry on the SCBE just loves to rail corners.

Jumping: The SCTE is also a legendary jumper, but its brother the SCBE is even better. The two are based on the same platform, how can that be? Because it doesn’t have a big truck body sitting on top. The SCBE is pure magic up in the air. It jumps level, yet if you need to adjust the nose it is easily done. It loves to ignore irregularities in jumps faces and can be landed at all sorts of wonky angles without flipping over. Better still, because of its buggy layout, you don’t have to worry about parachute effect on a windy day. From small jumps to quads at the local track, the SCBE generally makes you feel like a lot better jumper than you really are.

Bumps/Whoops: The SCBE has short overhangs on both the front and rear, plus very good suspension geometry and set-up. This allows it to absolutely pound through the gnarliest terrain you can find. Huge rollers on the local sand bar can be eaten up at alarm speeds, while braking and acceleration bumps at the local track are absorbed with barely a whimper. Even hitting square edge bumps at an angle are easily soaked up by the SCBE. Sharp faced rain ruts are murderous on nearly any 10th scaler, but the SCBE was impressive once again, getting over them with relative ease.

On-Road: Great vehicles can excel at either dirt or on-road, only epic ones can excel at both. While the stock tires were not well suited to pavement, the SCBE did a great job when driven on-road. It rarely traction rolled, only doing so when catching a rut in the pavement at speed, otherwise it just hauled ass. Its great turning on dirt worked equally well on pavement, and with a solid top speed, it drove like a scalded ape across our local parking lot.

Grass: Where as the SCBE’s tires didn’t work so well on pavement, they did an admirable job on grass. Throw in 4wd on a brushless system and the SCBE gets around very well in medium to short grass. If grass running is all that you do, you’ll probably want to lock up the middle diff, otherwise, it gets around fine and is very easy to drive.

Tires: The stock tires use a relative hard rubber compound. This limits their ultimate traction on high bite surfaces, but allows them to live much longer than “normal” RTR tires. For example, stock SCTE RTR tires can be worn completely out in a couple packs when driven on pavement. The stock SCBE tires are somewhat harder and they have much larger lugs. Wear was excellent and grip was more than adequate on most surfaces. They were best in loamy/loose dirt, but also did quite well in grass. Yes, there are better aftermarket tires on the market, but you won’t have to replace the stockers right off the bat.

Power: While not the gnarliest system on the planet, the stock Dynamite Fuze brushless combo has more than enough raw power to impress. On 2S the power was quick yet controllable, on 3S it jumped to nearly stupid levels. There is a bit of cogging from a dead stop, but once rolling it had a solid low-end, then ripped effortlessly through the mid-range. For the top-end it kept on pulling hard up to a 56 mph top speed. There is way more than enough power for a noobie and plenty on tap for all but the craziest of bashing maneuvers.

Radio: A standard for Horizon products, a Spektrum DX2E comes along with the SCBE. The DX2E works fine and fits a number of different hand sizes without issue. AVC electronic stability control also comes standard, a very nice touch. On high bite surfaces we either completely turned off the AVC or ran it about a quarter of the way up, but when the going got slick we dialed more in. On the slickest of surfaces like a rock hard and super dusty rc track, we turned up the AVC to about 75%. This instantly made the already stellar handling buggy even more on rails, basically making us look like pro drivers while the other guys at the track struggled to not slide out in every corner.

Broken Parts: You know, we have a certain reputation to keep here at BigSquidRC. Whenever we show up, we are expected to jump off the highest roof, over-jump the quadruple, etc. So yes indeed, the SCBE did not get it easy from our test crew. First off, we had a minor issue with the rear center driveshaft. Ours didn’t come with thread lock on its grub screw, thus allowing it to come loose on the first pack while we were shooting pictures. The buggy comes with a bunch of L-wrenches, so we grabbed the proper one and got back to driving quickly. Once back at the office we added some thread lock and never had it come loose again. Otherwise, our SCBE endured a lot of abuse with very little breakage. We did manage to break a rear hub after catching a pipe at speed and to blow up the rear diff, but it took a lot of hard bashing on 3S to do so. Just likes its brother the SCTE, the SCBE can take a lot of hard hits without falling to pieces.

Even straight out of the box, the SCBE’s springs, pistons, and oil are right in the ballpark. Add in some electronic stability control and it can pretty much make you look like a pro driver, even when you aren’t.

Speaking of the AVC, it didn’t seem like it inhibited tight turning as much as it used to, but then that just might have been us.

Props once again to Losi for the worlds best motor mount. It is exceptionally simple, extremely sturdy, and it is the best on the market.

While the stock servo isn’t anything special, it did an adequate job of keeping the front wheels pointed where we wanted them to be.

The body is hinged at the rear and stays on the buggy while wrenching or changing out a pack. Thankfully, it is hinged far enough back to where it never slams down on your hands while working on the buggy.

An EC3 connector comes stock on the speedo. If none of your packs have that type of connector plan on some soldering in your near future (or buying an adapter).

First generation SCTEs came with Velcro battery straps. Velcro makes it easy to fit a variety of different sized packs into a battery tray. The SCBE uses a plastic battery bar. The bar can be raised with extensions that are provided inside the box, but that tends to be a hassle. What we are saying here is we hope Losi brings back the Velcro. A battery bar is good for racing, not so good for bashing.

Best Mod: The rest of the buggy is so good that we feel the first money spent on hop-ups should be wheels/tires. Bolting on a set of Pro-Line Badlands will really help you unleash the beast on dirt surfaces.

Time To Bash: B Yes indeed, the SCBE is quick and easy to get running. Pop 4 AA batteries into the transmitter, then a charged 2 or 3S pack into the truck, and off you go.

Workability: A The SCBE is exceptionally easy to work on. There is nothing strange getting in your way, it uses standard metric/hex hardware, and it sports a standard/open 8th scale type layout. Life is good when wrenching on the SCBE.

Car Show Rating: A From the scale looking tires, to the cockpit with driver figures, our test crew absolutely loved how the buggy looked. While not perfectly “scale”, it was a great mix of realism and basher-chic.

Bash-A-Bility: B The SCBE is one tough customer. While it can be broken when driven to the extreme, under normal driving it can take some hard licks without snapping parts.

Fun Factor: A The SCBE has world class handling along with some pretty intense power on 3S. Our bash crew just couldn’t get enough trigger time with the SCBE.

Handling: A While the SCBE isn’t the very best handling rc car we’ve ever driven, it ranks way up there. In fact, the SCBE gives the average driver a good taste of what top-shelf race car handling feels like, without spending hundreds on mods.

Value: A With great durability, power, and handling, the SCBE gives a whole lot of performance for your cash.

Parts Availability: B The SCTE platform has been around a long time now (about 5 years). Over that time a good number of local hobby shops have stocked SCTE parts. So while you won’t find every part for the SCBE on the pegs at your local hobby shop, they are very readily available.

BigSquid Rating: A- No beating around the bush here, Losi knocked it out of the park with the SCBE. It absolutely rocks for bashing and can turn blistering laps around a prepped off-road track. The SCBE is one of those rare vehicles that does it all incredibly well and just might be the best 1/10th 4wd off-roader that money can buy.