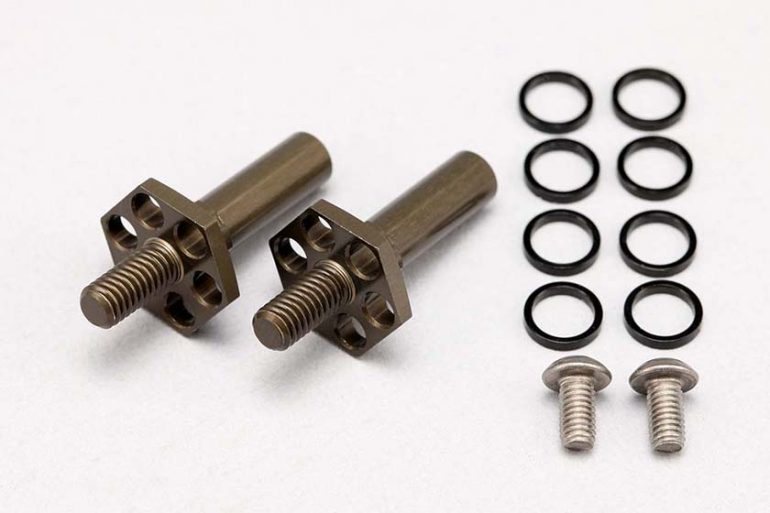 In the never ending pursuit of speed, Control and precision, lightweight front axles entered the game a little while ago. The theory is that shaving off (rotational) weight improves acceleration – the wheels spin easier, which in turns improves handling. A lot of you readers will be familiar with the 1:2 ratio: shaving a pound from the tires is the equivalent of shaving 2 pounds of non-rotating weight. Hence, it might be worth spending some money on this issue.

Among the contenders for said money we have, for example, Yokomo’s Aluminum UL front axle that weighs 60% less than the standard axle, a pretty impressive reduction! At 25 bucks per pair, the cost is roughly one fifth of the cost of gold, per unit of weight. While not as shiny as gold, they are a lot more sturdy, so I guess that’s OK.

But wait a sec! Hold on to your money just a little while. Just how much difference does this actually do? The fancy wheel axle might weigh 60% less than the original piece, but that equates to only 3.3 grams less. 1.9 grams, rather than 5.2. A complete wheel and tire weighs rougly 35 grams, so that would be a total of 40 grams of rotational mass with the standard axle. Reduced to 37 grams with the ultralight one – a weight reduction of 7.5%. Not that impressive anymore.

And now let’s get on to some physics. Where are those 7.5 grams actually saved? Not on the tire, but on the axle – that is, very close to the rotational axis. Does this matter? Yes, it does.  Rotational inertia depends not only on mass (weight), but also on the distance of that mass from the axis of rotation. To be more precise, the moment of inertia increases by the square of the perpendicular distance to the axis of rotation. In other words: weight saved very close to the center of the axis does not matter very much, weight saved farther out matters a lot more.

Do you hate maths and physics? No worries, help is at hand. Grab your cell phone charger by the cord, roughly a hand width from the charger. Spin it around, rather slowly, let go of it and see how far away from you it landed. (Or, if you don’t want to bash your charger, just feel the force. May it be with you). Now do it again, but with a feet of cord between the charger and your hand instead. Spin it at the same rotational speed – the same number of rotations per second – make sure no one and nothing is in the line of fire, and let go. This time, the charger should be flying a lot longer; in a roundabout way illustrating the concept that the same weight (the charger) exerts a Lot More force (longer throw) as the distance from the rotational axis (your hand) increases.

The radius of a drift wheel is 26 mm, outer radius of the rim rougly 31 mm. The saved weight of a 25 dollar axle is saved at a distance between 0 and 6 mm from the axis of rotation. Less than ten percent of the total weight, saved at the place where it matters the least. Will you feel the difference? Well, yes, if you paid for it I am sure you will imagine you do – never underestimate the power of placebo. Do I believe that such a difference truly can be felt? No. Maybe, perhaps, eventually by a ninja drifter of an advanced alien species, like by a dude from Japan, but hardly even in that case. Do I strongly discourage you from getting a pair of lightweight front axles? No, not really, if you’ve got the money burning in your pocket, do go ahead. Upgrades are fun, regardless of their usefulness. Just don’t fool yourself into believing these will make a noticable difference to your drift game.