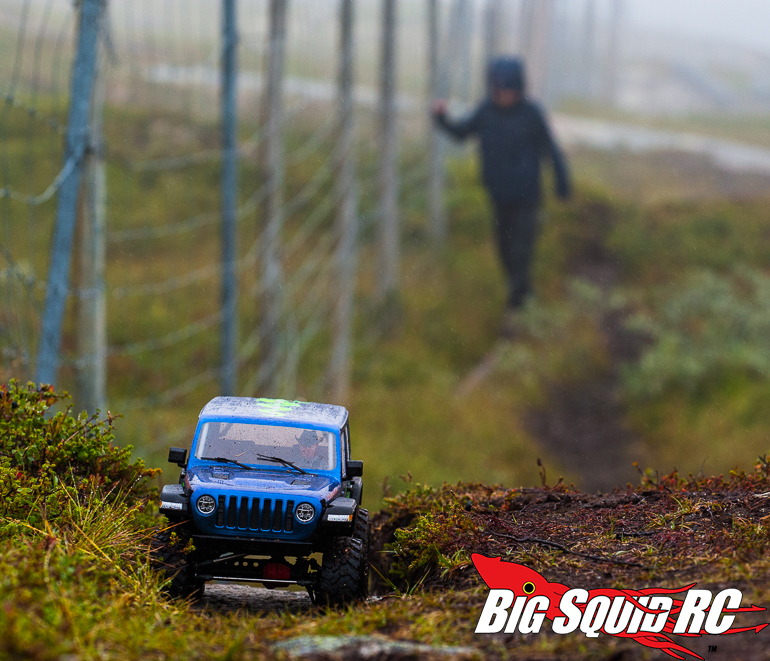 Available terrain and prevailing weather are the two main factors affecting my choice of vehicle whenever I feel like trigger time. I have no indoor arena anywhere near where I live, so I am dependent on nice and dry weather for outside asphalt drifting. Well, that’s part of what’s fun with RC, isn’t it? Variety. There’s a vehicle for every occasion.

A couple of weeks ago I had the good fortune of doing some trekking at 62 degrees north, just east of the Norwegian border. We stayed at an AirBnB, doing daily walks in the surrounding mountains. Very nice indeed, with beautiful views and plenty of reindeers around. I did mention this in a previous column, as well as how I unfortunately managed to bring along two rigs, but forgot the AC-cable for the charger.

The one best thing with RC, is driving together with my kids. At times, I do drive alone, when I want to wind down and have a bit of fun at the same time. This certainly has its merits, but shared fun is oftenly more than twice the fun. Hence, the opportunity of bringing along two cars on a trek was irresistible. In my experience, a 3S 3000 or 3300 mAh battery lasts for roughly two miles of mixed trailing and crawling in an SCX10iii and Bomber respectively. More with very careful (and somewhat boring) driving, less with a lot of speed bursts. I always bring two batteries, giving me four miles with a good margin. Certainly not enough for a full day’s trekking, but sufficient for a decent walk. 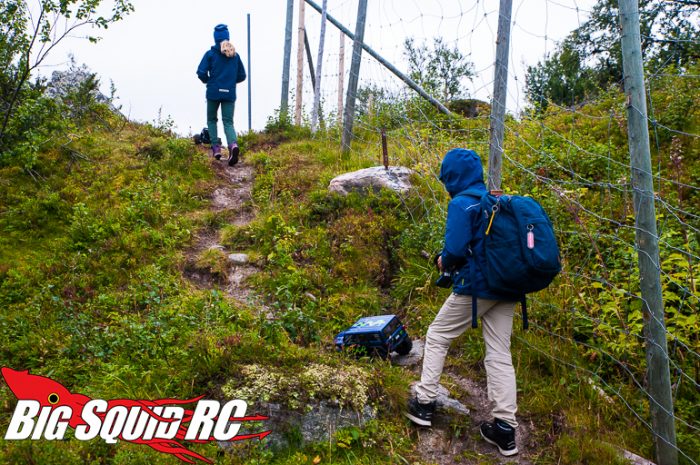 While on the topic of what I bring when trailing, I also bring an assortment of screws, nuts and rod ends, with matching tools. I don’t break things very often, and when I break something, it tends to be a rod end. It’s a quick and easy fix. Anything larger than that is: 1) unlikely; 2) difficult to predict and therefore unreasonable to bring spare parts for, and; 3) likely not suitable for roadside repair.

Anyway, with my batteries only storage charged, at roughly half capacity that is, I chose to bring the cars along for a relatively short walk right on the Norwegian border, in foul weather. I had walked the trail before and knew it would provide some nice crawling, mud, bogs, rocks and a border crossing. Not many RC cars cross country borders on their own four wheels, especially not these days. A silly little thing to do perhaps, but in all its insignificance nonetheless irresistible.

I have never done any mud riding before, desisting getting my rigs dirty when not necessary. Why drive through mud, if there’s another way around? Well, on this trail there was no other way around, and while a human might be able to balance over the mud holes on discarded border posts, climb on the border fence or jump between small patches of grass, cars certainly lack that ability. 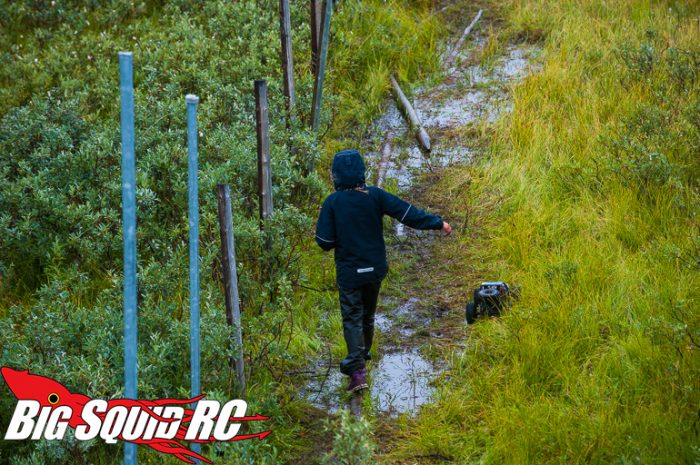 Hence, out of necessity, my cars saw mud for the first time. They both did me proud, doing a good job of crossing most mud holes, getting stuck only a few times. I would argue that is to be excused, when the mud actually is best described as water with a couple of molecules of dirt in it. 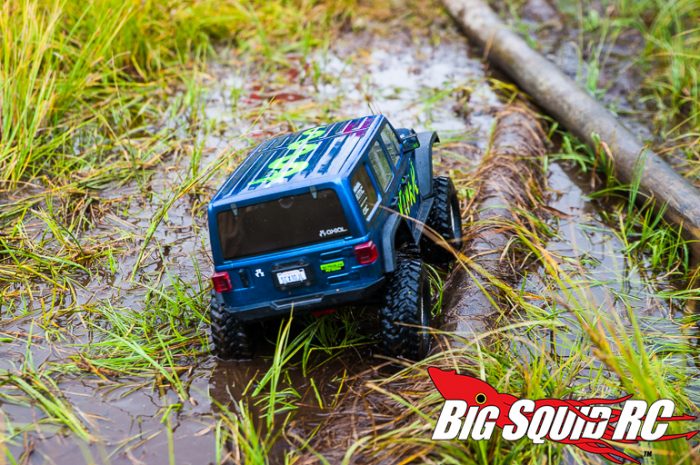 Way too thin to be eaten by fork. Only slightly thicker than the Mississippi river. If a spoon is needed, it’s soup (although not edible), rather than mud. To do soup riding, a lot of speed is needed, maybe also paddle tires. I had neither. My Bomber, Panther, might have had the necessary speed in it, but there was no room to accelerate and hit the puddles at speed, it couldn’t do breast strokes and so ended up on its belly. Swimming free-style, but not getting anywhere.

A funny thing worthy of note, is that both car’s batteries died within ten yards and thirty seconds of each other. 3S and 3300mAh in the Bomber, 3S and 3000mAh in the SCX-10 (named Viper). Very good, since it means that my kids will not have to argue over what car to drive based on how far they will go before they’re out of juice. I left Panther behind, so that we could then drive it the same way back, but chose to carry Viper the remaining mile or so to the border crossing.

The dignified and glorious border crossing I was looking forward to, was however not to be. Even though I daresay that the border crossing between Sweden and Norway is rather less ambitious than the US’s equivalents, it was surprisingly difficult to cross with an RC car. A fairly steep and rather narrow wooden crossing, slippery as ice when wet, with a head wind of thirty knots and rain falling horizontally. Impossible. 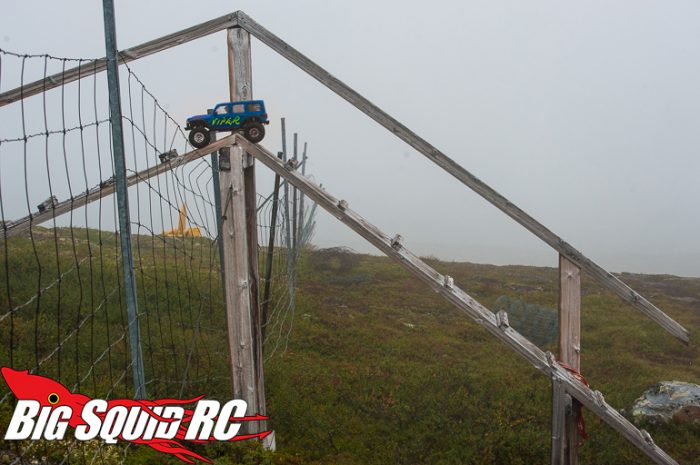 After several tries I had to give up, lift the car to the top, carefully drive down the other side, and then fall off the bridge at its end, landing on the roof over in Norway. Kind of like stumbling and falling on the red carpet. But rather stumbling on the red carpet, than not walking it at all, right? On the way back to Sweden twenty minutes later – we had to abort climbing the peak due to dismal weather about to turn dangerous – I realised that I could have simply driven under the fence, rather than trying to traverse the wooden walking bridge. But that would have felt sneaky, so nevermind. 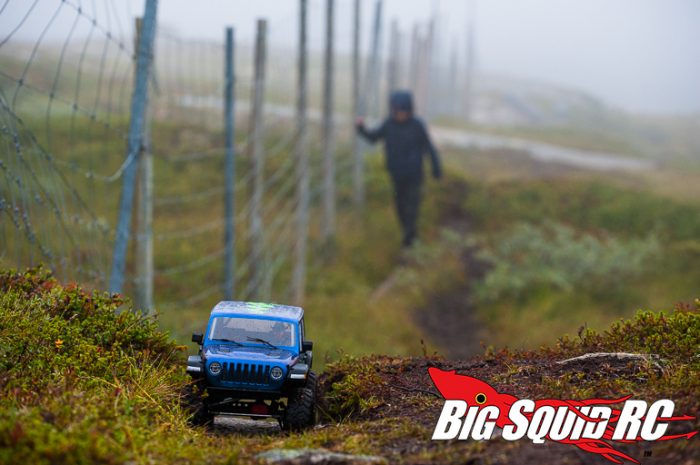 On the way back, we picked up Panther, drove both cars back, freewheeled Viper in the downward slopes to save battery and had both cars last exactly to the parking lot. Again, running out of juice within minutes of each other. Perfect! Also carrying a quarter gallon of golden cloudberries picked by the 40% of the family not yet deeply hooked by RC’s. Awesome! All of us wet and cold. But what a good walk! Borderline crawling with those dearest to me: RC at its very best.

Viper and Panther posing at a border cairn. Viper in Norway, Panther in Sweden: 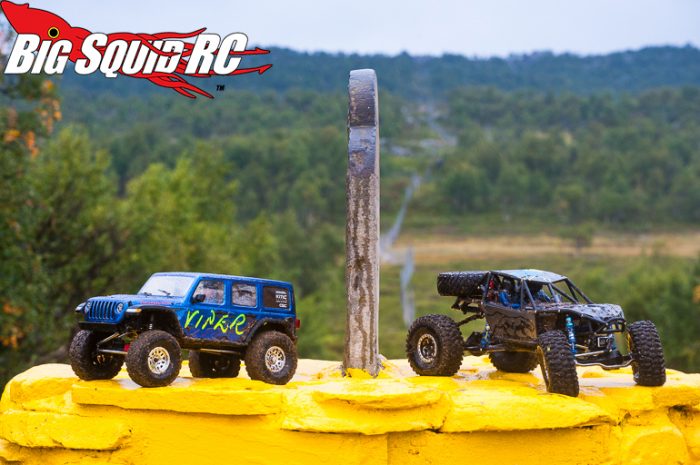 PS. No cars were harmed in the making of this walk, and all cars involved were well cleaned at a mountainbike rinsing station and then allowed a nice, rest in the sauna afterwards. 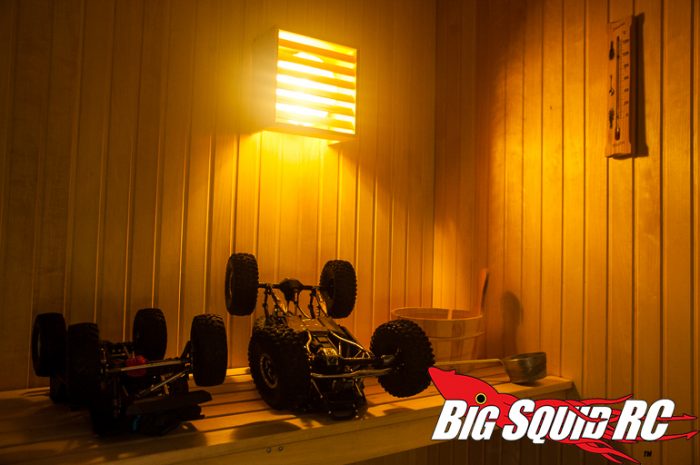