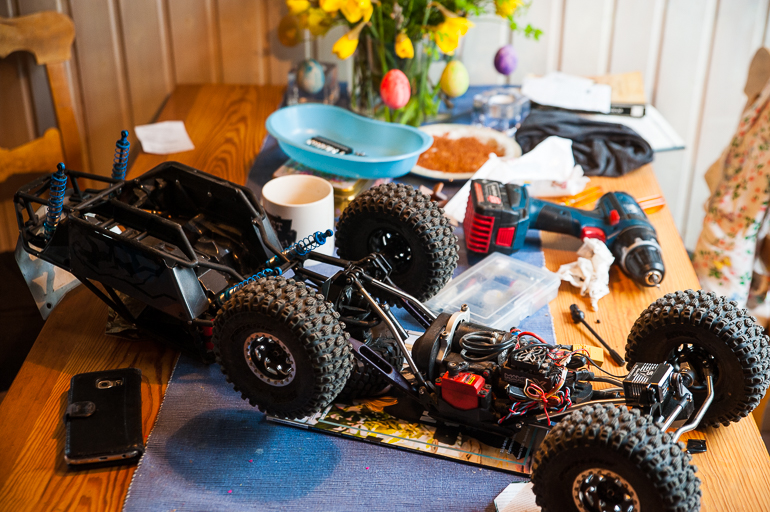 A couple of days ago it was, in theory, spring outside, so one of my squidlings and I decided to do some crawling on the rocks just outside. A Yeti, a Bomber, and a grey, barren post-apocalyptic landscape just about to wake up. Also, recently adjusted break settings on the Bomber, to prevent it from doing a front flip whenever one lets go of the throttle. It should have been great, but after two minutes, the Bomber started doing the much feared ”KrKrKrKrKr” noise, rather than the usual ”vrrrrrrr”. I’m sure you know it, it also goes by the name ”maybe-a-hundred-dollars-and-three-hours-of-wrenching-noise”. Ouch!

My squidling, well reared on this aspect of life, immediately let go of the throttle and handed the transitter to me. A careful pull of the trigger revealed that the Bomber somehow had gotten a front dig function, all by itself, entirely without my involvment. Spooky. Front wheels moving, rear wheels locked, expensive and time-consuming sounds from somewhere inside.

This is when dad says:

– Sorry mate, but we need a short break so that I can look into this,

and then performs a quick diagnostic survey at the accident scene, while at the same time trying to calculate how badly his hobby budget might suffer, and trying to remember what spare gears he might have lying around.

Luckily, it turned out that the problem was a minor one: the drive hub of the rear drive shaft had come loose from the gearbox output axle. A simple matter of tightening a pin screw and a bit of loctite. I enjoy wrenching, but not when I have planned to drive, so this was a bummer. Especially since the rig in question was an Axial Bomber, and while my favourite car, it is a bit of a pain to wrench on. More specifically, it is a pain to access the intestines of it, about a zillion screws needing to be unscrewed in order to get to its beating heart.

I got to the task just a couple of minutes later, at the kitchen table. The inherent power of an uncluttered work space cannot be overestimated: 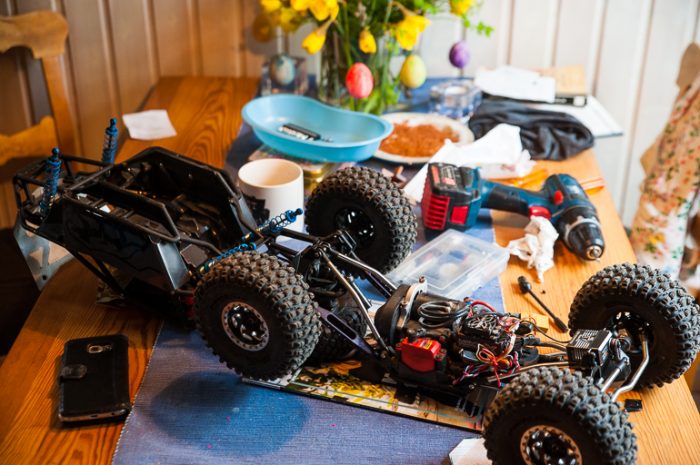 But then, neither can wrenching where the family is, chatting with the better half and having a coffee and some cookies, and some more cookies and another coffee at the same time. Thirdly, neither can an electric screwdriver be overestimated. Mine is a 14.4V Bosch, very much up to the task, but not really suited for it. A 10.8V would be a lot easier to work with. But never mind, it saved my wrists and did the job. 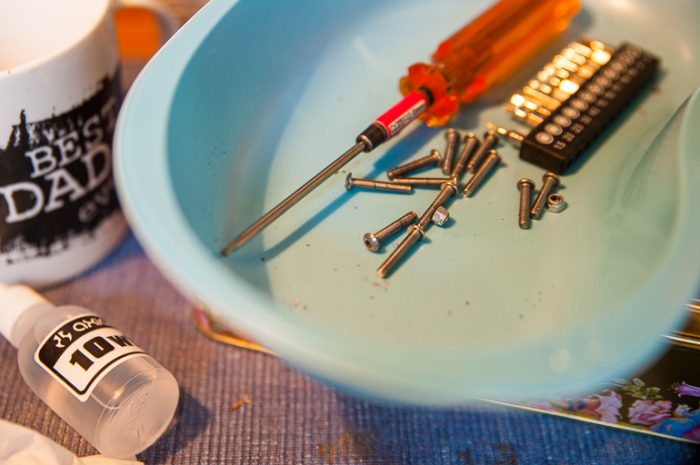 In picture: the dozen screws that safeguard the Bomber’s innards, coffee, a metal box full of cookies and silicon oil to keep the screws cool when being inserted again. All necessities.

Anyway, the good thing with a dozen screws needing to be undone, is that once inside, one might as well do it properly. I had a great afternoon, and even opened up the motor for the first time ever. It was a bit grubby on the outside, so I thought I might as well have a look on the inside as well. Thank you John Holmes for your video on how to do this, and thank you for putting a kind of parts organiser on the inside of it, very thoughtful of you: 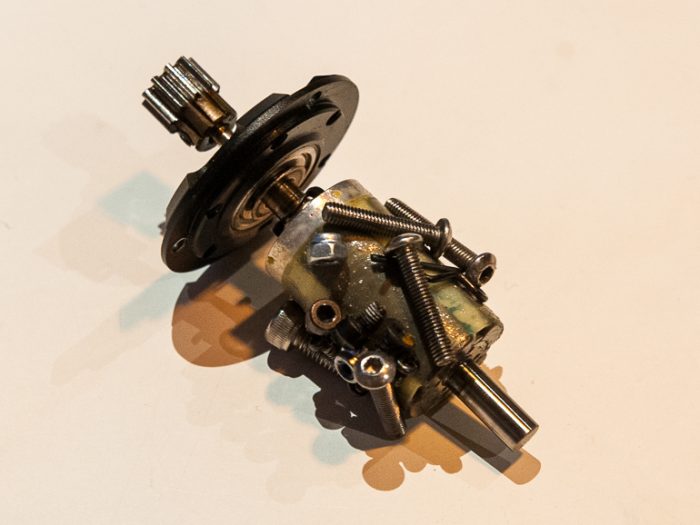 It turned out that it was perfectly clean on the inside. I only added a bit of oil to the bearing, so that it would feel worthwhile, before assembling it again. The outside has now gone from grubby, to non-grubby: 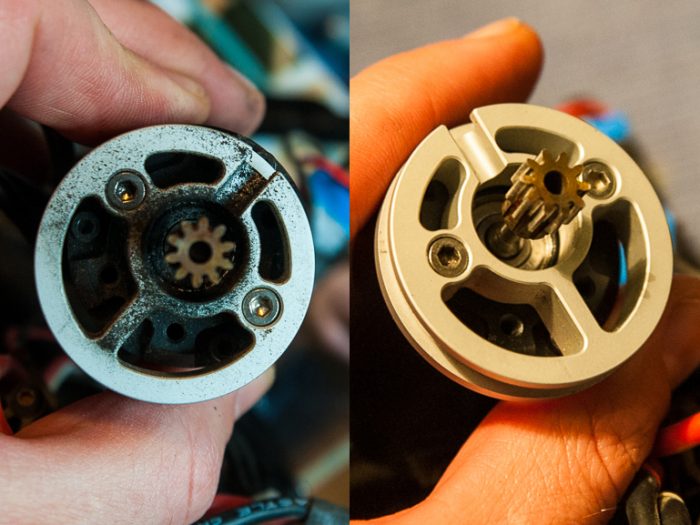 Yes, that’s a tiny pinion. 10 teeth, very good for the Australian summer. I had forgotten about it and will change it to a 12T now that I have found out, and am not living Down Under anymore. See, another great thing about having to undo those twelve screws. I neither would have checked, nor cleaned the motor, had that pin screw of the drive shaft been easier to get to.

All’s well that ends well. Afternoon turned to evening, and I wanted to have the car ready  for a drive next day. Before I popped the cage back on, I had a look at the mess of wires, sighed, and then quickly decided that it would have to wait until the pin screw of the front shaft turns loose. I am sure there will be a dozen screws to encourage me to do a proper job the next time, too!