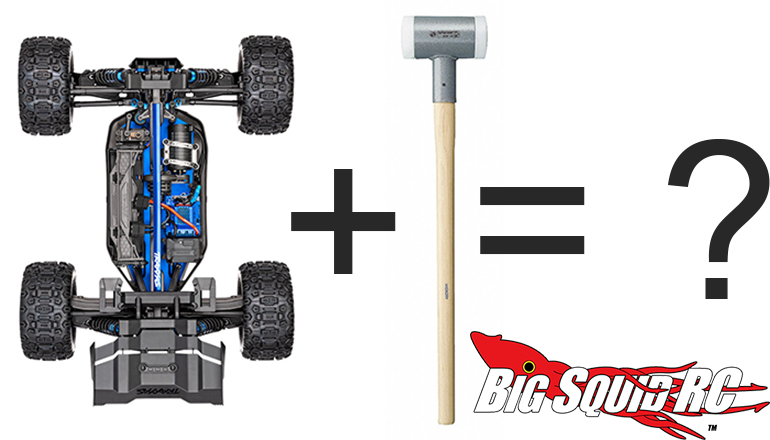 Losing grip – Hitting the Traxxas Sledge with a sledgehammer

Right now, a lot of us want a Traxxas Sledge, the latest and want to be greatest bash machine out there. I want one too, but due to a limited budget am sadly not likely toget one. Anyway, suppose I do buy one (birthday is coming up), would I want to hit it with a sledgehammer? Would you? For reference, a fifteen pound sledgehammer:

Imagine it: a beautiful morning, a sledghammer, and a nice good swing aiming for a front wheel. Or perhaps its belly. Whack! How satisfying wouldn’t it be?! The sound and feel of metal and plastic bending and breaking. Hell yeah!

Now, lets get down to the nitty gritty. Regular readers of this column will by now know two things (hopefully more): 1) five weeks with no column does not mean I’m dead is sadly a reccurring occurence, this time due to too much work, and catching The Bug; 2) I like getting into the physics and maths of things. Crunching the numbers and see what comes out. No worries if you hate numbers, just skim through and you’ll get the bottom line anyway. If you really, really hate numbers, just skip down to where it says “Bottom line” in bold letters.

First, lets have a look at the kinetic energy of the aforementioned sledgehammer. Remember your physics? Kinetic energy equals mass times velocity squared, divided by two: KE = 1/2mv2. I’ve spent some time trying to work out the speed of a sledgehammer swing, and it seems that five meters per second, or twelve miles per hour, is about right. But, heck, we’re BigSquidRC – basically superhumans – so lets double that number! Lets hit the Traxxas Sledge with a mighty quick swing, like a dwarf swinging his battle hammer in an epic fantasy story. Like Thor of the Avengers, swinging his Mjolnir! Ten meters per seconds it is.

This gives us a kinetic energy of roughly 340 Nm. However, the number we’re looking for is the force of impact. According to Newton’s second law, the net force acting upon an object is defined as the rate of change of the momentum of the object. In other words, the faster the decceleration, the higher the force. Lets say the impact upon the Traxxas Sledge lasts for a hundredth of a second, a rather kind estimate. I am no phycisist, so please correct me if I’m wrong, but the bottom line is an average impact force of 6800 Newton (Favg=mv/Δt).

6800 N is plenty, essentially like being hit by a sledgehammer. Would you do this to your Traxxas Sledge? Or Arrma Kraton, for that matter? Probably not.

What am I getting at? Well, the Traxxas Sledge was released some three weeks ago, and within a day there were dozens of videos of people (including us) trying to send it into orbit. Everyone asking the same questions: did the chassis bend? Did it break? Does it stand the rigours of hard core bashing? Is it more durable than the Arrma Kraton?

Time for maths, again. The first number to go into our next set of calculations is the nut factor of YouTube bashers (Jeremy, I’m looking at you). A zwillion miles and three gallons would be a conservative estimate. This, combined with said vehicle’s impressive top speed and a skate park, gives us a peak altitude of the Sledge of at least twenty, probably thirty, maybe even forty feet above ground level.

In other words: the kinetic energy of a Traxxas Sledge falling from thirty feet is the same as that of a fifteen pound sledgehammer swinged by a fit and experienced craftsman. Remember what I wrote earlier: according to Newton’s second law, the net force acting upon an object is defined as the rate of change of the momentum of the object. In other words, the faster the decceleration, the higher the force.

In the sledgehammer example, the kinetic energy was converted to work in 0.01 seconds, resulting in an average impact force of 6800N. Should the falling Traxxas Sledge land on all four, the wheels and shocks would absorbe the impact, prolonging it to roughly a tenth of a second. The impact force is then reduced to 680N, divided on four wheels, resulting in a force of 170 N per wheel. A far cry from hitting it with a sledgehammer.

However, if you lose control of the car in the air, it does a cartwheel and hits the concrete sideways, one of the front wheels taking the impact at such an angle the shock can’t absorb it. Or if you land it flat on its belly, on a steel rail. Well, that’s an impact on a single point, happening in a hundredth of a second. Like hitting it with a fifteen pound sledghammer in full swing.

Do note that I am being conservative: the kinetic energy of a falling Traxxas Sledge is probably more (as in twice to four times as much) than that of a sledgehammer in full swing, since the speed of the latter in reality is closer to five than ten meters per second.

We don’t hit our cars with sledgehammers, and were we to do it, we wouldn’t expect them to survive the encounter unscathed. We (some of us at least) send our bashers twenty or thirty feet into the air, and eagerly wonder if anything will break. Something is amiss.

The kinetic energy of a falling monster truck is the same, or larger, as that of a sledgehammer in full swing. If it’s a car of a well known brand, landing on all fours, it will do fine. If it suffers a really bad landing, it won’t. A bad landing roughly equals hitting it with a sledgehammer, and it will suffer from it. Something will break, or bend. Period.

Hence, I fail to see the point of all the “durability tests” out there, and I refuse paying (very much) attention to people confidently claiming that one car is more durable than the other based on this kind of “testing”. If you send two cars (a Traxxas Sledge and an Arrma Kraton being in vogue right now) thirty feet in the air twenty times each, the one that comes out on top will be the one that doesn’t suffer from a really unlucky landing, and from seeing how most YouTubers drive these things, that comes down to luck. I wouldn’t go so far as too say this kind of testing and comparing is irrelevant, but a lot of it comes down to chance and I would be very careful basing a buying decision (should I get this one or the other) on it.

To read another rant, hit the link.